Wildlife Rescue Center of the Hamptons

The East End organization known to many for its exciting summertime fundraisers toasted a decade of wildlife rehabilitation efforts that has now grown to supporting over 1,300 animals per year. On screens placed throughout the space, guests watched footage of past rescue efforts and triumphs while nibbling gourmet bites and sipping a signature cocktail the Wildlife Rescue Hurricane specially crafted for the evening.

A touching speech by The Wildlife Rescue Centers Executive Director Virginia (Ginnie) Frati, thanked guests for their support in assisting the Center, which provides animals with warmth, veterinary care, pain relieving drugs, rehabilitation and [eventually] release. Continuing her speech, Ginnie explained that each animals stay at the Center is met with love, care, clean cages, plenty of food and water and top notch veterinary care! People like you support usthank you for helping us celebrate our Tenth Anniversary! As guests departed they were treated to exciting goodie bags, which included combs by Celebrity Hairstylist Angelo David of Angelo David Salon, Philippe by Philippe Chow gift certificates, hair care products by Pureology, Alley O Organic Cookie VIP Certificate and a new book, Thank You by Hatherleigh Press.

ABOUT THE WILDLIFE RESCUE CENTER OF THE HAMPTONS: A 501(C)(3) not-for-profit organization dedicated to the rehabilitation of wild animals impacted by encroachment of humans on their habitat. As a grass-roots organization, the Center has grown from a few concerned friends to a group of over 1,000 members and supporters. The Center is a full-time professional wildlife hospital staffed by licensed rehabilitators, biologists, animal behaviorists and volunteers. Located in an area that is a unique and irreplaceable ecosystem, consisting of salt and fresh water wetlands, pine barrens, deciduous forest and meadowland. The hospital at the Wildlife Rescue Center is designed exclusively for wild animals and is free of any ambient noises or smells to stress the recovering wildlife.

For further information about The Wildlife Rescue Center of the Hamptons, please visit www.wildliferescuecenter.org 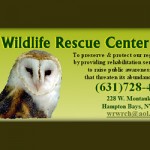