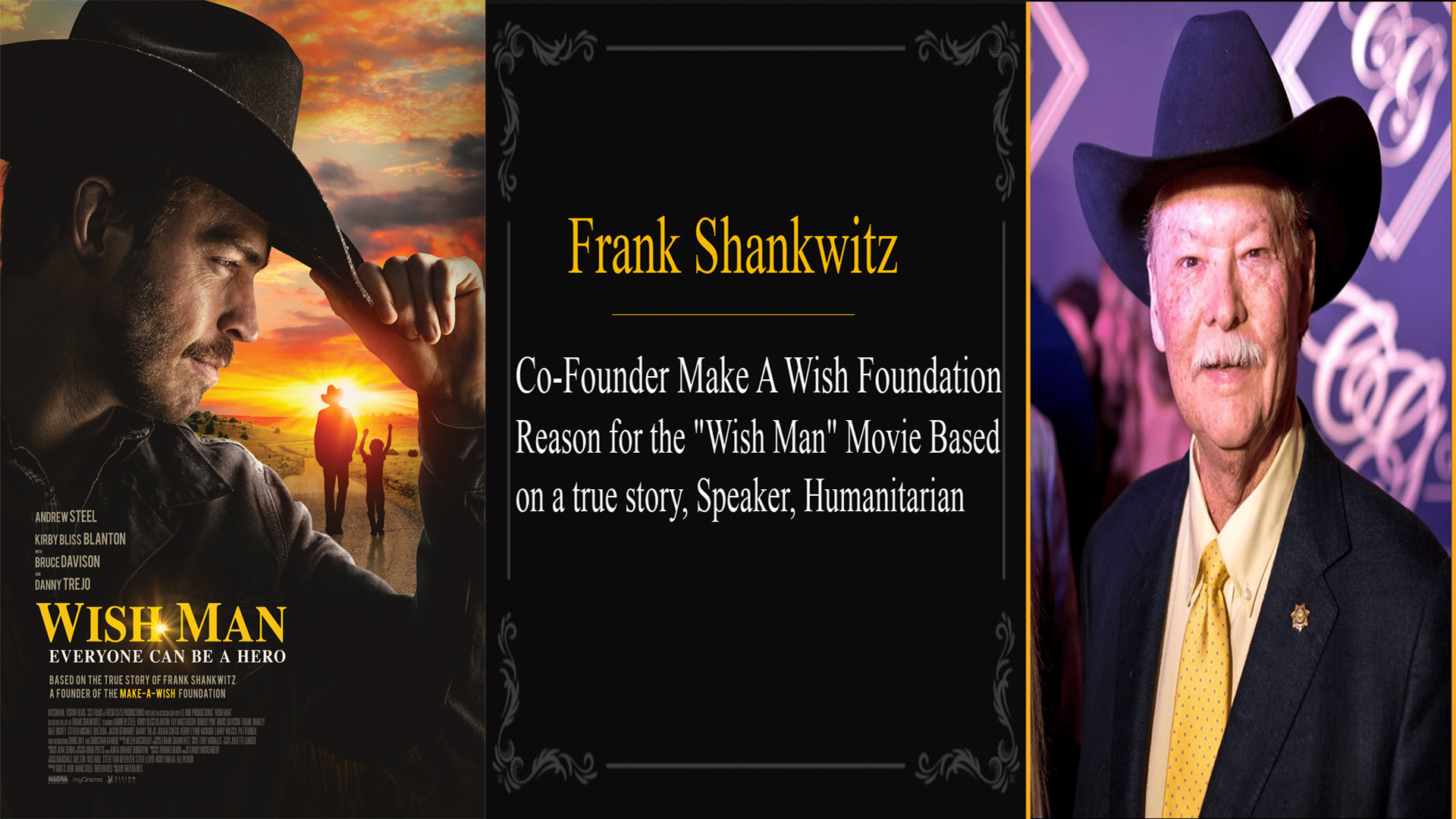 The Founder of The Make A Wish Foundation, Frank Shankwitz and the Actor starring in “Wishman” Andrew Steel Thursday 9/22/2019

Directors Guild Movie Premiere Creation on how the “Make A Wish” Foundation was created.


Please join us at the NY Premiere of this heart touching film Written and Directed by Theo Davies. “Wish Man” has received critical acclaim and will be released in September worldwide. The film is the story of how the “Make A Wish” Foundation was created.

Others attending will be some of the team from “ Framed” Actor Armand Assante, Producers Lucia Kaiser & Bonnie Timmermann, David Unger and Harris Tulchin. “Framed” is inspired by Tod Volpe’s compelling memoir.

or the first time in history, the Make-A-Wish Foundation has been brought to screen in the new film, ‘Wish Man,’ starring Andrew Steel, Kirby Bliss Blanton, Frank Whaley, Danny Trejo, and Bruce Davison. The film tells the story of how the Foundation’s creator, Frank Shankwitz, was able to part from childhood trauma and transform into helping millions of children across the world.

Meet Frank Shankwitz, a motorcycle cop struggling with his past and emotional childhood trauma after being ripped apart from his father by an emotionally abusive mother.

“Ever since I was a kid, I’ve always been on my own. Never had any reason to care for anyone else. Until now[…] I’ve been a fighter all my life, and I’m tired of not knowing what to fight for. Being special is never something I was used to. But Michael thought I was a hero. And if I can do it, anybody can do it.”

In what seems to be a nasty separation or divorce, Frank’s mother has done everything to keep Frank and his father apart, until he appears on their property wanting to see Frank. Before parting ways, he gives Frank a cowboy hat as a reminder that he will always be with him.

Wanting to spend time with his father, Frank’s mom decides to forcibly take Frank away, throwing him in the car, leaving nothing behind but the cowboy hat on the dusty ground. Unbeknownst to Frank, his father is on a life-long mission to track down his son and bring him back “home.”

Flash forward to Frank grown up as a motorcycle cop, we see him as a closed-off figure. Until Michael. The police department brings young Michael to visit the precinct and meet everyone.

However, he is forced to face his past and change his future when he’s almost killed in a freak car accident on a desolate highway.

This life-altering incident sparks a chain reaction that places Shankwitz on a difficult and painful path towards redemption, leading him to an unexpected relationship Michael, terminally ill with leukemia, with a life expectancy of one week. The result? An unexpected relationship between Shankwitz and the boy, but most importantly, Shankwitz discovering a light that has been buried deep within since he was a child.

“One simple act of kindness can cause a ripple effect” –Andrew Steel, “Frank Shankwitz,” ‘Wish Man’

This ripple effect later comes to be known as the Make-A-Wish foundation.

From writer and director, Theo Davies, the biographical drama, Wish Man, explores the light and dark side of Shankwitz’s life and why each hardship led to the creation of the iconic organization.

We have created a Hug for Peace Video Game…
Next Post: Raj Gupta shares his Good News with us