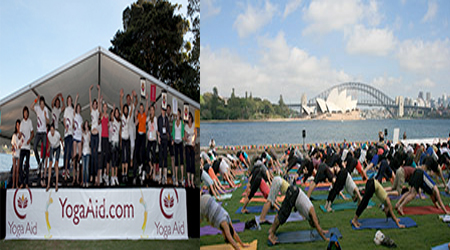 Yoga Aid Foundation, an international nonprofit that raises funds for charities through philanthropic yoga events, announced today that it will host the first-ever, one day, around the world yoga tour benefiting 15 humanitarian-based charities internationally. On September 9, 2012, The Yoga Aid World Challenge will unite yogis around the globe in an effort to raise $1million with 100% percent of the proceeds going directly to the selected charitable organizations.

Starting in Sydney, the 24-hour yoga relay will travel around the world and end at sundown in Los Angeles. The Yoga Aid challenge will bring together renowned teachers, studios and students in over 20 countries, creating a united community, while focusing on raising money for charity. During these events, yogi participants will embark on a 2-hour yoga practice as a way to celebrate the funds they raised for the charity partners.

Unlike any other event, all expenses are supported privately – ensuring 100% of donations go straight to the charities.

“The Yoga Aid family is calling on the entire international yoga community to band together and help us host at least 200 events in 20 countries and raise more than $1 million for charities during the 2012 Challenge,” said Clive Mayhew, Co-founder, Yoga Aid Foundation.  “We could not be more excited for the 2012 Yoga Aid World Challenge, as we hope to raise more money through yoga than ever before.”

Those individuals who are inspired by The Yoga Aid World Challenge are encouraged to signup and become Community Ambassadors. Ambassadors bring The Yoga Aid World Challenge home to their communities by creating, organizing and hosting a local event, whether the venue be a nearby park, studio or community center. Furthering Yoga Aid’s commitment to giving, the Foundation will provide all of the necessary event tools and funding for the creation of any local event scheduled during the September 9th 24-hour global yoga-relay.

“The Yoga Aid World Challenge is more than just our way to give back – it is an international charitable platform uniting all yogis for the greater good and activating a sense of joy in giving back to the world.” Eriko Kinoshita, Co-founder, Yoga Aid Foundation.

For more information on Yoga Aid or to become a Community Ambassador, please visit: http://www.yogaaid.com/

About Yoga Aid Foundation
Yoga Aid began in 2006 with knowledge so beautifully summed up in MC Yogi’s words: “When we live to give love, there’s no greater feeling”.  Two yoga enthusiasts; Clive and Eriko, set out to put their yoga practice into action by creating Yoga Aid: an international non-profit supported by a small group of yoga and global change advocates. Here, yoga and charity find a connection, enabling the ‘giving’ mentality cultivated in yoga practice to take action across the world in supporting a variety of charities and community projects.

About Yoga Aid Challenge
The Challenge is the way this giving community comes together; through special, two-hour yoga practices held in hundreds of locations worldwide. The Challenge is lead by a series of 12 teachers, many of whom are internationally renowned. Hundreds of yogis take part in these unique events in every location, raising money along the way for selected charity partners.