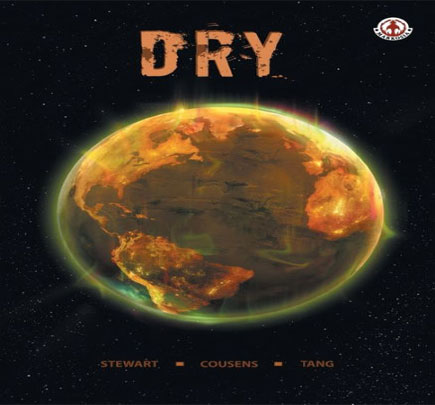 Stephon Stewart, director, inventor, academic and author of the book ‘Dry’, is on a mission to get teens and adults to become environmental activists
LOS ANGELES, CALIFORNIA – There’s a lot of chatter about global warming, but many people are not sure what to make of it. They just know that there’s a debate that goes back and forth. One author is out to set the record straight and teach teens about the dangers of global warming, and he’s doing so in a sci-fi fantasy graphic novel that they will find engaging, full of adventure, and even hopeful. The book, titled “Dry,” is by Stephon Stewart and is available now through online booksellers.
“It’s imperative that we get the younger generation to realize the importance of the threat that global warming creates and to get them to take action,” explains StephonStewart, theorist and author. “This is a graphic novel that teens and adults will find fascinating, and they will come away learning about the problem and be more aware that we need to save water and address climate change issue now.”
The book, published in October 2021 by Markosia Enterprises, has been written with teens ages 13 and up through adults in mind. The story focuses on the journey a farmer and his daughter take in their quest to find water to survive because the earth all dried up due to global warming. A lesson in perseverance and how important the actions of each individual are, the book provides a visually and emotionally profound lesson regarding human existence.

Some of the things the book aims to do include are the following:
Help parents introduce environmental ethics to their children.
Provide a foundation of understanding global warming and how it can impact humans.
Identify the dangers we face globally if positive changes are not made.
Show the importance of persevering and working hard to improve conditions.
Inspire people to become scientists, engineers, and entrepreneurs to help solve the climate change problem.

“This is such an important issue, and I’ve had great feedback from teens about how the book resonates with them,” added Stewart. “It’s an honor to be able to be a part of this special mission, where I show through sci-fi the ugliness of humanity when in dire straits.”
According to NASA, climate extremes, such as droughts, floods and extreme temperatures, can lead to crop losses and threaten the livelihoods of agricultural producers and the food security of communities worldwide. Human activities (primarily the burning of fossil fuels) have fundamentally increased the concentration of greenhouse gases in Earth’s atmosphere, warming the planet. Natural drivers, without human intervention, would push our planet toward a cooling period.
Throughout the story, we are constantly reminded to not take Earth for granted as we see troubling visuals of our planet without oceans and agriculture. We see the future of the alarming consequences of climate change and what would happen if we continued to allow Earth’s atmosphere to remain in a vulnerable state. See how the story ends and read the 186-page adventure story for yourself. “Dry” is out everywhere now and available worldwide at Barnes and Noble, Amazon, and markosia.com/dry/.
About Stephon Stewart
Stephon Stewart is a director, writer, artist and academic. The stories Stewart creates are metaphysical narratives and fantasy thrillers that implement Nostradamus themes. His concern for the future of humanity has inspired him to write a trilogy of scripts called DRY, WET, and ICE. Stewart’s original adventure fantasy script, DRY, was adapted into a 186 page graphic novel with Art by David Cousens and Lettering by Kuen Tang. DRY was acquired by one of the UK’s leading publishers in the industry, Markosia, and is now available at TARGET, Barnes & Noble, Amazon and at https://markosia.com/dry/. Stewart’s artistic vision is to inspire humanity to remain hopeful and active in the clean energy transformation for Earth, while his passion has directed him toward exploration in both Science and environmental ethics. This passion led him to painting on canvas the Earth depicted in several ways what may happen if we don’t take care of our planet, today that art is on apparel with climate change messaging: Global Transfiguration. In between film making and writing, Stewart has continued his studies in physics, and has been published in the Open Journal for Biophysics, based on a theory he’s developed with a neuroscientist to unblock blood vessels and clogged arteries, with the intention to extend life:
https://www.scirp.org/pdf/ojbiphy_2021102914000143.pdf
Sources:
NASA.The cause of climate change. https://climate.nasa.gov/causes/
#stephon #stewart #global #warming #director #inventor #academic #author #book #dry #mission #teens #adults #environmental #activists #debate #climate #change #engaging #adventure