“The Biggest Loser”: Catching up with Season 5’s Jackie Evans 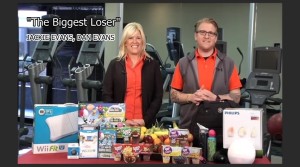 Their family is extremely close, so it’s never been unusual to see Jackie Evans and her son, Dan, spending time together.
“The Biggest Loser” just changed the venue and the activity.

Before going on the show, Jackie and Dan met for dinner at Olive Garden twice a week. They were such fixtures at the Italian restaurant chain, and such enthusiastic consumers of the endless breadstick baskets and pasta bowls (not to mention free soda refills), that they decided to film a portion of their “Biggest Loser” audition video there.

“Our table was full of empty Coke glasses,” remembers Jackie, 53, who combined with Dan to make up Season 5’s Orange team. She lost 89 pounds on the show, and he lost 136. “We wouldn’t let the waitress take any of them away, and it was shocking to see how much we really did drink, along with all those breadsticks and that fettucine alfredo.”

Jackie has been back to her old haunt just once in the 3 1/2 years since her season aired. These days, when she and Dan go out together around their hometown of Frankfort, Ill., it’s usually to train for their next race.

They’ve committed to running 500 miles this year to raise money for Team Future, a subsidiary of their Kids Fit Foundation, which they created to help kids across America get active. To reach their goal, they registered for 19 half-marathons (13.1 miles), and Jackie says she has logged 134 miles so far.

Dan, a country musician with an album called “Goin’ All Out to his credit, has had to pull out of a few of the races because he was asked to perform at the post-race party. He’s opening for Bret Michaels at Chicago’s Rock ‘n’ Roll Marathon Aug. 14.
Jackie says participating in all these races has helped her get to the best place, weight-wise, that she’s been since leaving “The Biggest Loser.” She’s within 10 pounds of her weight at the Season 5 finale, which aired in April 2008. She started on the show at 246 and ended up at 157.

Jackie calls herself “a completer, not a competer,” and combines intervals of running and walking to finish her half-marathons. She’s proof that you don’t have to be a serious athlete — or a spring chicken — to incoporate challenging physical activity into your lifestyle.

“I’m going to be 54 next month, and I’m doing 19 half-marathons this year,” she says. “We’ve got races every other weekend, and when we get into October it’s four weekends in a row. You try to run all that, you’re going to deteriorate, develop foot and knee problems and ankle problems. You know what I mean?

Jackie says her lifestyle before “The Biggest Loser” was a lot tougher on her body than any series of races could ever be. She’d been overweight since childhood and tried every diet gimmick under the sun, but she never felt motivated to get moving.
“I was a total couch potato,” she says. “I worked a full-time job, sitting at the computer all day, and then by the time I got home I would be so exhausted mentally, but the problem is, you associate that with being exhausted physically. It takes mental energy to make you get up and exercise or do anything. So I was so mentally exhausted I never did anything physically. I would just sit around all night long and eat popcorn and watch TV and wonder why I couldn’t lose the weight.”

The most important lesson Jackie says she learned on “The Biggest Loser” was to plan and prepare all her meals and snacks ahead of time. She also learned that she had to eat more often, rather than drinking coffee all day and coming home starving in the evening.

This helps to keep her energy level steady and her metabolism active throughout the day.
“I have to have things that are portable and available to me in case I don’t make it home to make a better, more-elaborate dinner,” she says. “So the big thing is pre-preparation of all the food I’m going to eat, which includes shopping for that food at the beginning of the week. I have to sit down and make out the entire menu, including on-the-go meals and snacks. That was the hugest, hugest thing for me, and it was a struggle at first, but now I’m in a very, very good place.”

Jackie says Dan, who splits his time between Frankfort and Nashville, helps to keep her diet in check. And she does the same for him. When Dan cooks himself a healthy dinner, he makes enough for the rest of the family. When Jackie pulls out her salad mix to divide up in individual Ziploc bags for the week, she makes a few for Dan, too.

If Jackie is indulging in unhealthy habits, Dan is there to sound the alarm, and vice versa.
“We don’t judge each other, because if he wants to be fat it’s up to him, and if I want to be fat it’s up to me,” Jackie says. “But neither of us can sit there and make excuses for gaining weight or say we don’t know why we’re gaining weight, because we’ll call each other out on that.”

That’s obviously a 180-degree change from the pre-“Biggest Loser” days, when Jackie and Dan would sit at Olive Garden over big plates of steak gorgonzola and enable each other.

“I don’t even want to eat that stuff anymore,” Jackie says. “It’s not worth it. It’s so much fat and so much cream and so much whatever that it’s not worth having 2,000 calories for that small amount of pleasure. I’d rather have 800 calories — which is still a lot for a dinner — and have the cappelini tossed in olive oil. That would be a cheat night that I might do when I’m out of town or celebrating an occation. I’m not going to go to Olive Garden just for dinner on a normal night.

“When I went back that one time, I went because I thought I missed it. I had the same thing I used to have. And I was like, ‘This is good, but honestly, it’s not as good as I remember.’

LET THE MOTHER-SON TEAM THAT LOST 225 LBS
INSPIRE YOUR VIEWERS TO GET HEALTHY!
DAN & JACKIE EVANS

Dan and Jackie Evans are best known as the popular mother-son team featured on season five of a hit reality show, where