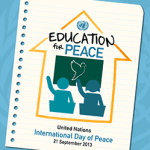 It is not enough to teach children how to read, write and count. Education has to cultivate mutual respect for others and the world in which we live, and help people forge more just, inclusive and peaceful societies… We must support peace education programmes, protect students and teachers from conflict, help rebuild schools destroyed by war, and ensure all girls and boys have access to a quality education that includes learning about resolving and preventing conflicts.

Recalling its resolution 36/67 of 30 November 1981, by which it declared that the third Tuesday of September, the opening day of the regular sessions of the General Assembly, shall be officially proclaimed and observed as International Day of Peace and shall be devoted to commemorating and strengthening the ideals of peace both within and among all nations and peoples,Recalling also its other relevant resolutions, including resolution 55/14 of 3 November 2000,Reaffirming the contribution that the observance and celebration of the International Day of Peace makes in strengthening the ideals of peace and alleviating tensions and causes of conflict,

Considering the unique opportunity it offers for a cessation of violence and conflict throughout the world, and the related importance of achieving the broadest possible awareness and observance of the International Day of Peace among the global community,

Desiring to draw attention to the objectives of the International Day of Peace, and therefore to fix a date for its observance each year that is separate from the opening day of the regular sessions of the General Assembly,

Mr. MENENDEZ (for himself, Mrs. GILLIBRAND, and Mr. HARKIN) submitted the following resolution; which was considered and agreed to

Supporting the goals and ideals of Peace Day.

Whereas, beginning in 2002, the United Nations has designated September 21 of each year as the International Day of Peace, which is known in the United States as Peace Day;

Whereas the United Nations dedicates the International Day of Peace to the cessation of hostilities and nonviolence, and calls upon all Nations and people to commemorate the day appropriately, including through educational efforts, and public awareness;

Whereas, on Peace Day 2006, the World Food Programme carried out a 60-ton food drop in Southern Sudan;

Whereas, on Peace Day 2007, the Peace One Day organization worked alongside the United Nations Children’s Fund (UNICEF), the World Health Organization (WHO), and the Afghan Ministry of Public Health to vaccinate 1,400,000 children of Afghanistan against the polio virus and, on Peace Day 2008, approximately 14,000 health workers and volunteers delivered polio vaccinations to 1,600,000 children under the age of 5 in 6 Afghan provinces;Whereas, on Peace Day 2007, Star Syringe vaccinated children in rural areas against measles, diptheria, tuberculosis, hepatitis, and whooping cough in 20 locations, including Uganda, India, Ethiopia, and Indonesia;

Whereas, on Peace Day 2007, in the conflict-torn South Kivu province of the Democratic Republic of Congo, UNICEF and other organizations provided insecticide-treated mosquito nets to protect 600,000 children from malaria, and also provided vitamin A, de-worming medication, andmeasles immunizations;

Whereas, on Peace Day 2007, there were 82 Peace Day initiatives in Afghanistan alone, involving more than 30 United Nations agencies, government departments, radio stations, and civil society organizations, and including arms handover ceremonies, community prayers for peace, painting schools white, educational activities, and a Peace Walk through the streets of Heart, Afghanistan;

Whereas the Peace One Day organization provides free educational materials to schools in the United States and worldwide that enable young people to prepare for and participate in Peace Day activities, learn the skills needed to resolve conflicts peacefully, and cultivate a sense of active global citizenship; and

Resolved, That the Senate expresses its support for the goals and ideals celebrated on Peace Day, which is observed each year on September 21; supports continuing efforts to raise global awareness of the goals of Peace Day and to engage all sectors of society in the peaceful observance of the International Day of Peace, in accordance with United Nations General Assembly Resolution 55/282 of September 7, 2001, including work with United Nations agencies and non-governmental organizations to promote life-saving and humanitarian activities on Peace Day; and encourages people in the United States to observe Peace Day, September 21, 2009, with appropriate programs, ceremonies, and educational activities, in order to raise awareness of the need for peaceful resolution of conflicts of all kinds.