The Film “Remember Us”

You are here: Home / All We Need Is Love / Children and Parents / The Film “Remember Us” 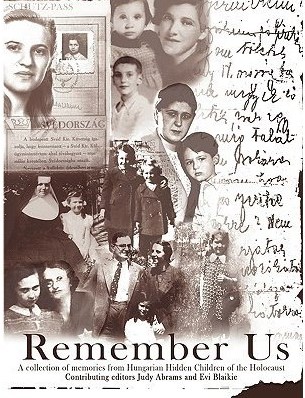 The Film “Remember Us”
A Collection of
Memories from Hungarian Hidden Children of the Holocaust
By Terri Hirsch
On the occasion of the Hungarian Holocaust Remembrance Day Saturday, 16th April 2016, a special screening of the film “Remember Us” was hosted by Ambassador H.E. Ms. Katalin Annamaria Bogyay, Permanent Representative of Hungary to the United Nations. Present were Chaim Litewski, Chief of United Nations TV, Rudy Vegliante, Executive Producer (Green Leaf Productions) and Evi Blaikie, survivor, who introduced the film and shared some of her own experiences of the war and its aftermath.
Directed by Jason Auerbach and Rudy Vegliante, “Remember Us” is a collection of memories from Hungarian Hidden Children of the Holocaust which focuses not only on who these children were but the adults they have become. This film is not the horror tales of the Holocaust but are the accounts of those experiences and memories of individuals that left indelible impressions in the minds of the storytellers and have influenced their lives. Each story is accompanied by a short biography and photographs of a survivor relating memories of their trauma filled childhood as a child in hiding, as a young adult in the West and as a current adult. Many of the stories are specific memories that were imprinted into the child’s mine. Some were tragic, some were events that changed their lives. “Remember Us” illustrates how children react to the experience of war.
Evi Blaikie writes, and enjoys grandmotherhood. “Magda’s Daughter: A Hidden Child’s Journey Home” was her first full length work. This was followed by “Remember Us.”

TO KICK OFF EARTH WEEK. SECOND ANNUAL BIKE-TO-WORK RIDE
Next Post: Passover and the First Holocaust