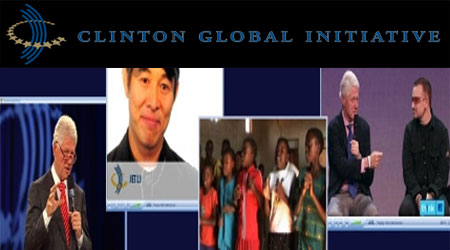 Meeting will convene more than 1,000 global leaders September 23-25 in New York City to address the theme ‘Designing for Impact’

NEW YORK – Today, President Bill Clinton announced the program for the eighth Annual Meeting of the Clinton Global Initiative (CGI) to be held September 23-25 in New York City. This year’s gathering will bring together more than 1,000 CGI members and participants, including current and former heads of state, Fortune 500 CEOs, leaders from the nonprofit sector, and celebrities, to devise and implement high-impact solutions to some of the world’s most pressing challenges.

This year marks the first time that CGI will organize its largest meeting around a single theme. The 2012 Annual Meeting’s program, “Designing for Impact,” will explore how leaders can extend design thinking, often tied to startups and market-based solutions, from the private realm to accelerate positive outcomes for individuals’ lives, their environments, and their systems of government, commerce, and consumption.

“This year, our Annual Meeting will help CGI members design solutions to critical challenges such as empowering girls and women to be full participants in the global economy, encouraging the private sector to create markets for the under-served, and increasing the sustainability of our food supply as global demand doubles within the next 50 years,” said President Clinton. “We redesigned the meeting this year to optimize the creative spirit and remarkable dedication of our members, who, since 2005, have made more than 2,100 commitments that are impacting nearly 400 million lives in more than 180 countries. I look forward to the solutions and commitments that will emerge from the CGI community at this year’s meeting.”

Each of the three days of the 2012 Meeting will explore how CGI members can create solutions that make the maximum positive impact on people and their communities. The world’s leading innovators in technology, business, public health, and other sectors will discuss the philanthropic potential of strategic design in sessions such as:

International leaders and experts will also offer guidance in special sessions, such as The Case for Optimism in the 21st Century, which will explain why despite the recent financial crisis, optimism still makes sense, and Strategic Philanthropy: How to Think Bigger and Do Better, a panel on how corporate and philanthropic organizations can maximize the results of their giving.

New features at this year’s meeting include interactive Commitment Workshops and Design Labs that will allow members to share knowledge, build partnerships, and generate Commitments to Action: new, specific and measurable plans that address a pressing global challenge.

The Commitment Workshop session topics include:

In Design Labs, members will collectively brainstorm answers to pressing questions, such as:

The full agenda for the 2012 Annual Meeting of the Clinton Global Initiative can be found at clintonglobalinitiative.org/2012.

President Clinton will also present the sixth annual Clinton Global Citizen Awards in a special ceremony that includes celebrity guests and a live musical performance on Monday, September 24. The event recognizes remarkable individuals for their leadership in philanthropy, government, civil society, and the corporate sector.

Press registration is now open to members of the media. To apply, please complete the form at: cgilink.org/PP392s.

ALL PRESS MUST BE CREDENTIALED BY THE CLINTON GLOBAL INITIATIVE. All media must apply for credentials and must be approved by CGI in order to attend. The deadline to apply is Friday, September 21 at 5 p.m EST. Journalists may apply for credentials on-site, but pre-registered media will be given priority. If applying on-site, you MUST bring a press ID as well. For questions about press registration, contact Dana Moncrief in CGI’s Communications Department at dana.moncrief@clintonglobalinitiative.org.

Members of the press who have received email confirmation from CGI to attend the meeting are encouraged to pick up their credentials on Saturday, September 22 from 12 p.m to 9 p.m. EST at the press registration desk. Press must enter on 52nd Street between 6th and 7th Avenues. To pick up your credential, a valid government-issued ID is required.

About the Clinton Global Initiative
Established in 2005 by President Bill Clinton, the Clinton Global Initiative (CGI) convenes global leaders to create and implement innovative solutions to the world’s most pressing challenges. CGI Annual Meetings have brought together more than 150 heads of state, 20 Nobel Prize laureates, and hundreds of leading CEOs, heads of foundations and NGOs, major philanthropists, and members of the media. To date CGI members have made more than 2,100 commitments, which are already improving the lives of nearly 400 million people in more than 180 countries. When fully funded and implemented, these commitments will be valued at $69.2 billion.

CGI also convenes CGI America, a meeting focused on collaborative solutions to economic recovery in the United States, and CGI University (CGI U), which brings together undergraduate and graduate students to address pressing challenges in their community or around the world. For more information, visit clintonglobalinitiative.org and follow us on Twitter @ClintonGlobal and Facebook at facebook.com/clintonglobalinitiative.