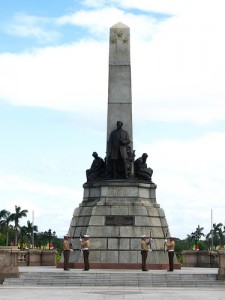 Rizal Park, also known as Luneta Park or colloquially Luneta, is a historical urban park located in the heart of the city of Manila, Philippines, adjacent to the old walled city of Manila, now Intramuros. Since the Spanish Colonial Era, the park has been a favorite spot for unwinding, socializing, an urban oasis for family picnics on Sundays and holidays. It is one of the major tourist attractions of Manila.

Located along Manila Bay, Luneta has been the site of some of the most significant moments in Philippine history. The execution of pacifist Dr. José Rizal on December 30, 1896, sparked the fire of the Philippine Revolution against the Spanish colonizers, elevating the martyr as the national hero of the country. The park was officially renamed Rizal Park in his honor and his monument serves as the symbolic focal point of the park. The Declaration of Philippine Independence from American rule was held here on July 4, 1946 as well as the political rallies of Ferdinand Marcos and Corazon Aquino in 1986 that led to the EDSA Revolution that deposed Marcos ending his dictatorial government.

The bronze-and-granite Rizal monument is among the most famous sculptural landmarks in the country. It is almost protocol for visiting dignitaries to lay a wreath at the monument. Located on the monument is not merely the statue of the national hero, but also his remains.[5]

On September 28, 1901, the United States Philippine Commission approved Act No. 243, which would erect a monument in Luneta to commemorate the memory of José Rizal, Philippine patriot, writer and poet.[6] The committee formed by the act held an international design competition between 1905–1907 and invited sculptors from Europe and the United States to submit entries with an estimated cost of ₱100,000 using local materials.[7]

The first-prize winner was Carlos Nicoli of Carrara, Italy for his scaled plaster model titled “Al Martir de Bagumbayan” (To the Martyr of Bagumbayan) besting 40 other accepted entries. The contract though, was awarded to second-placer Swiss sculptor named Richard Kissling for his “Motto Stella” (Guiding Star).

After more than twelve years of its approval, the shrine was finally unveiled on December 30, 1913 during Rizal’s 17th death anniversary. His poem “Mi Ultimo Adios” (“My Last Farewell”) is inscribed on the memorial plaque. The site is continuously guarded by ceremonial soldiers, known as Kabalyeros de Rizal (Knights of Rizal).

The Independence Flagpole, standing at 107 metres (351 ft), is the highest flagpole in the Philippines. On this spot in front of Rizal Monument, at 9:15am July 4, 1946, the full independence of the Republic of the Philippines was proclaimed as authorized by the United States President Harry S. Truman. Next to the flagpole, a grand Independence Grandstand, designed by architect Juan M. Arellano, was built just for the occasion. Quirino Grandstand. In 1949, a permanent grandstand, a replica of the Independence Grandstand was completed along Manila Bay where President Elpidio Quirino was sworn in after winning the presidential election. Since then, newly-elected Presidents of the Philippines traditionally take their oath of office and deliver their inaugural address to the nation in the grandstand, which was later renamed after President Quirino. Many important political, cultural and religious events in the post war era have been held here.

On 12 June 1998, the park hosted many festivities which capped the 1998 Philippine Centennial, the event commemorating a hundred years since the Declaration of Independence from Spain and the establishment of the First Philippine Republic. The celebrations were led by then-President Fidel V. Ramos.

Recent events in the park

January 15, 1995. The closing Mass of the X World Youth Day 1995 was held here attended by more than 5 million people. This is the record gathering of the Roman Catholic Church.

August 23, 2010. The park was the site of the 11-hour hostage crisis where a Hong Thai Travel Services tour group on a coach was hijacked by Rolando Mendoza, causing casualties and injuries.