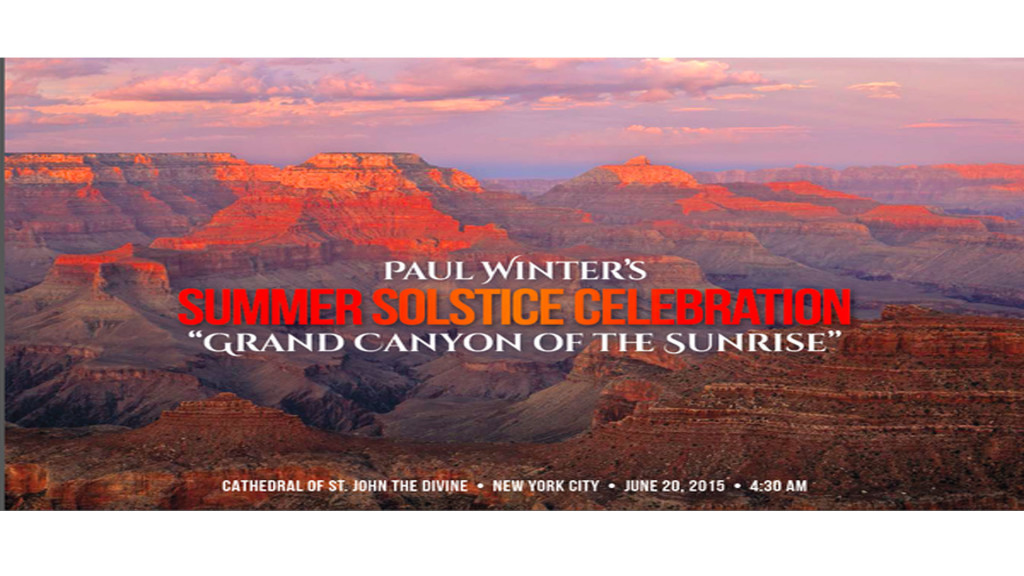 Thirty years ago this summer, Paul McCandless, John Clark, Eugene Friesen and I were together in the Grand Canyon, recording music that became part of our album Canyon. This Saturday morning, June 20th, the four of us will have a “Canyon reunion” in the canyonesque acoustics of New York’s Cathedral of St. John the Divine, performing new music inspired by the indelible memories of our Grand Canyon adventures. Bringing a new dimension to our canyon music will be Navajo singer Radmilla Cody, who is coming from her home in Canyon country to collaborate with us for the first time.

An integral part of the opening and finale tracks

on the Canyon album, “Grand Canyon Sunrise” and ”Grand Canyon Sunset,” is the Cathedral pipe organ. It will be played by an amazing improvising organist, Raymond Nagem, who will also be making his first performance with us.

Our ensemble will include six huge Balinese gamelan gongs, played by Matt Kilmer and Keita Ogawa.

from the Canyon Album

Immediately following the music at Summer Solstice on Saturday, the entire audience will be invited to a reception in the Nave of the Cathedral, during which members of the audience can meet each other along with the musicians. Our friends from the Shumei community of Japan will host the reception, and offer

complimentary tea and coffee. (Shumei’s tea, grown in Japan according

to their tradition of natural agriculture, is the most delicious I’ve tasted.)

We consider this reception an integral part of the Summer Solstice Celebration. Our audience always includes many uniquely devoted people

– “fervent folks,” I call them – who might welcome this chance to meet kindred spirits with whom they’ve just shared this deep-listening journey from the darkness to the dawn.

On Friday, June 26th, at 7.30pm, at the Litchfield Community Center, there will be a special

presentation about vital work now underway in Nepal to help children traumatized by recent earthquakes there.

Second Response is an initiative of the Fortunate Blessings Foundation, founded by our long-time friend Bill Spear. Since its inception following the 2004 Indian Ocean tsunami, Second Response has helped reduce the incidences of Post Traumatic Stress Disorder in more than 100,000 children in Indonesia, Japan, Samoa, Indonesia, the Philippines and the USA. Teams are now in Kathmandu and Pokhara, Nepal.

When first responders leave after the initial emergency phase of a disaster or traumatic event, stricken communities are often not adequately prepared to help children overcome the Post Traumatic Stress that emerges in the weeks that follow. Innate, natural resilience makes it possible for most children to recover from a traumatic event with simple loving

presence and emotional support; however, children also benefit from physical exercises that gently release repressed emotions through participation in fun-filled, expressive games. Bill’s approach known as PLAYshops are joyful experiences for children of all ages.

from the Second Response team now on the ground in Nepal.

Please take advantage of this opportunity

to meet BIll and his colleagues and learn of their amazing work.

With gratitude,
For living music,
Paul