You are here: Home / Archives for ankor 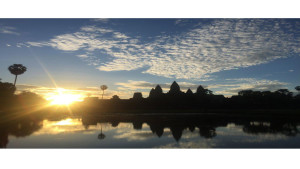 Southeast Asia The Kingdom of Cambodia By Terri Hirsch The lure of the past is brought to life in Siem Reap nestled between the rice paddy countryside along the Siem Reap River that serves as the gateway to the temple ruins. Officially known as the Kingdom of Cambodia and once known as the Khmer Empire it is located in the southern portion of the Indochina Peninsula in Southeast Asia bordered by Thailand to the northwest, Laos to the northeast, Vietnam to the east and the Gulf of Thailand to the southwest. Siem Reap has tree lined boulevards, an historical museum and artisan workshops consisting of art, wood and stone carvings, statues, furniture and handicrafts. The City is best explored on foot or on a "tuk tuk" (a rickshaw with the front-end of a motorcycle). Although … END_OF_DOCUMENT_TOKEN_TO_BE_REPLACED

In 2020 we will take our event to 193 countries and other locations to create the largest world gathering & broadcast to share Peace, … END_OF_DOCUMENT_TOKEN_TO_BE_REPLACED