You are here: Home / Food / Taste of the Upper West Side Debuts New Restaurants, Welcomes Back Revered Standards; Adds Mixology and Live Music to the Mix, Click Here for Videos & Podcasts… 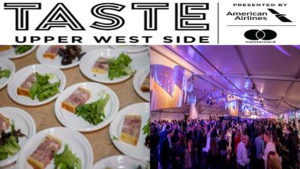 Summer in the City Presented by Yelp Reservation

NEW YORK (May 10, 2018) – The 2018 Taste of the Upper West Side (Taste UWS) Presented by American Airlines and Mastercard will highlight local chefs and restaurants, and the event debuts of a dozen exciting new restaurants. On Saturday night, a special section of signature bars and well-known mixologists will add to the festivities for the first time. During the two-night celebration, more than 80 featured restaurants will present extraordinary fare, along with unlimited wine tastings and live music under a magnificent tent spanning the entire block between West 76th and 77th Streets.

Now in its eleventh year, the annual food-based fundraiser Taste of the Upper West Side is the brainchild of the Columbus Avenue Business Improvement District (BID), a 501(c)(3) not-for-profit representing merchants and property owners on Columbus Avenue, from West 67th Street to West 82nd Street. In addition to introducing Upper West Side restaurants to new patrons in the neighborhood and beyond, Taste of the Upper West Side has raised significant funds benefiting such worthy organizations as Wellness in the Schools and Citymeals on Wheels, among others. Through these much-loved events, the BID was able to purchase and donate 19 solar-operated trash bins for Theodore Roosevelt Park, helping to eradicate a rodent problem. Proceeds over the years also have gone to the BID’s signature Neighborhood Streetscape Beautification program and its acclaimed sustainable streetscape in front of the O’Shea School Complex, which has become a haven for the community, as well as an educational tool for the students.

“This year, we are proud to be promoting two of our own ‘hometown’ heroes, Jacob Hadjigeorgis and John Fraser,” says Barbara Adler, Executive Director of the Columbus Avenue BID. “We are constantly amazed at the new and talented chefs and restaurants coming to the Upper West Side. It is wonderful to be able to showcase them at our Taste UWS events, sometimes before their new restaurants have even opened.”

Summer in the City Presented by Yelp Reservations

Summer in the City kicks off the annual two-night food event with highly-anticipated debuts of restaurants and bars, along with longtime local favorites. This year’s honoree is beloved chef and restaurateur Jacob Hadjigeorgis, owner of Jacob’s Pickles, Maison Pickle and, opening soon, Lucky Pickle Dumpling Co. Among the many new restaurants introducing innovative fare will be Zen Taco, Twin Palms, Amelie, Make My Cake, Elea, Recolte, and Vai. In addition, scores of neighborhood favorites will be joining the party again this year, including Playa Betty’s, Jing Fong, Bodrum, AG Kitchen, and FishTag. As always, there will be unlimited wine, spirits and music by DJ Phresh – all centered around innovative seasonal food prepared by 40 of the Upper West Side’s most sought-after destinations.

Best of the West VIP Reception Presented by 21 West End

An exclusive, hour-long preview of the event, the Best of the West VIP Reception provides an opportunity for participating guests to mingle one-on-one with celebrity chefs and restaurateurs, including this year’s Best of the West Honoree Chef John Fraser, recognized worldwide for his Michelin-starred and award-winning restaurants Dovetail, The Nix, Narcissa, and The Loyal. With limited attendance, special seating area, early entree to the evening’s food, spirit, wine, and beer presentations, and direct access to the chefs before the main event, the Best of the West VIP Reception is a memorable experience in a relaxed setting for an entire hour prior to general admission.

A highpoint of this year’s Best of the West will be the premiere of a unique section dedicated to signature bars and mixologists, all preparing one-of-a-kind cocktails. Among those participating will be Manhattan Cricket Club, Da Capo, Amelie, Guyer’s, Maison Pickle, Prohibition, and distinguished spirit sponsors Tito’s Vodka and Hiro Sake. Best of the West Honoree John Fraser will be serving epicurean tastings from his Michelin-starred Dovetail, along with 40 other illustrious Upper West Side restaurants, including The LEOPARD at des Artistes, The Milling Room, Red Farm, Rosa Mexicano, and Crave Fishbar. Live music returns with Joe Battaglia & The New York Big Band further enhancing the ambiance of the Upper West Side’s most anticipated event of the year.

The Columbus Avenue Business Improvement District (“BID”) is a 501(c)(3) not-for-profit organization that represents merchants and property owners along tree-lined Columbus Avenue, from West 67th to West 82nd Streets. Formed in the landmark district in 1999, its membership includes a diverse range of retailers, restaurateurs and commercial and mixed-use property owners, comprising all the commercial establishments on the Avenue. The Columbus Avenue BID’s district also includes the American Museum of Natural History, Theodore Roosevelt Park, The New-York Historical Society and the Rose Center for Earth and Space.

The Columbus Avenue BID is responsible for developing a wholly sustainable streetscape with the City’s first bioswale between West 76th and 77th Streets. For 10 years, it has produced and hosted Taste of the Upper West Side and is responsible for streetscape beautification efforts that include landscaping, lighting, solar-powered trash receptacles, and more.

In 2020 we will take our event to 193 countries and other locations to create the largest world gathering & broadcast to share Peace, … END_OF_DOCUMENT_TOKEN_TO_BE_REPLACED