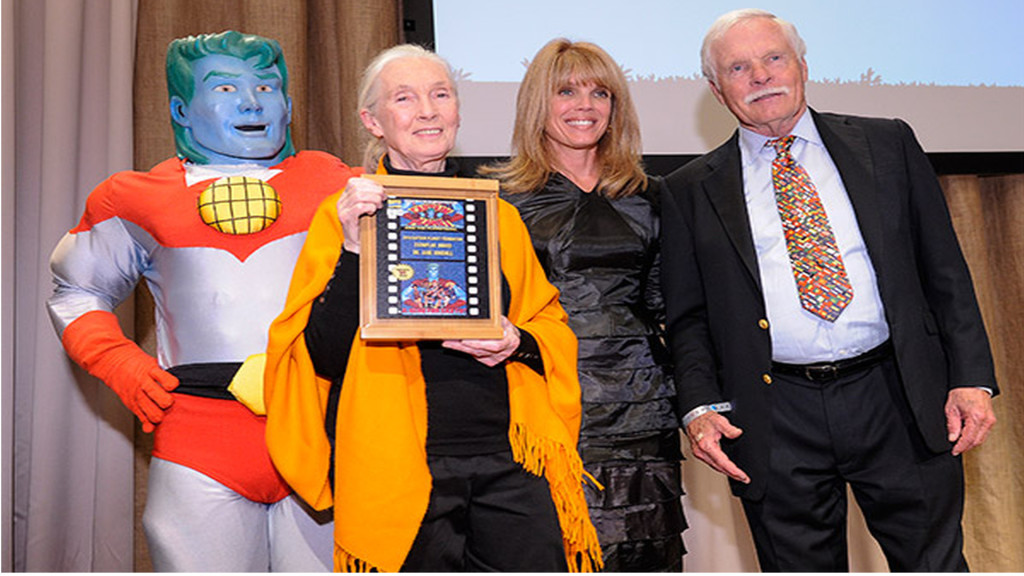 Kristi York Wooten interviews Jane Goodall at the Captain Planet Foundation
Happy New Year’s! This year’s Captain Planet Foundation Gala Exemplar Award winner was Jane Goodall for her lifetime of commitment to our planet. You can read more about the Gala on The Mother Nature Network, Atlanta Magazine, Atlanta Journal Constitution and the Huffington Post.
This was a really inspiring way for myself, CPF and all its supporters to close an exciting year. Jane Goodall is internationally recognized as working on the frontier for wildlife and our planet. Kristi York Wooten interviewed Jane at the gala and has listed out her New Year’s resolutions inspired by this formidable, soft-spoken eco-hero.

1. Make protecting the environment a priority in daily life, because even small actions add up.
“You might think, ‘What can I do? I can’t do anything to help.’ But if a billion or two billion people start making the right environmental choices, we can move into the sort of world we will not be ashamed to leave to our great-grandchildren.” – Jane Goodall

2. Travel as much as you can. It’s an automatic eye-opener. If you can’t afford it, do it virtually.
“Everybody can’t [afford to] travel everywhere. Yet, if you watch channels such as Discovery or National Geographic or Disney Nature, you can see other parts of the world. If you just look at the pretty pictures of unspoiled nature – which still exist – you’ll have a very different impression than if you watch the more investigative pieces, which show what’s actually happening [to the planet].” – Jane Goodall

3. Fight poverty in your own backyard and around the globe. It’s not only the right thing to do morally, it’s the smart thing to do ecologically and economically.
“I realized early on [in my work] that we couldn’t save the chimps if the people living around this little beautiful area of forest are starving. So we began our programs to alleviate the poverty and empower the people. They’ve now become our partners.” – Jane Goodall

4. Find your passion button. What makes you want to take action? Passion + Action = Happiness and Fulfillment.
“At the 1986 conference called Understanding Chimpanzees, it was just shocking for me to find out how forests were going away and chimp numbers were dropping. I thought, ‘I don’t know what I can do, but I better to try and do something.’ I went to the conference as a scientist and I left as an activist. I haven’t spent more than three weeks in one place since 1986.” – Jane Goodall

5. Eat less meat –or, preferably, none at all.
“Probably the thing people realize least about climate change is the damage we’re doing by eating so much meat. The agro-farming of animals is destroying the planet. We’re made from vegetarians.” – Jane Goodall

6. Mentor young people in your community. Never give up on them.
“The most important message we can relay to young people is to let them know that every day you make a difference. It’s all about empowering them and encouraging them to roll up their sleeves and take action. When you’ve got young people in 138 countries all making a difference — [our program, Roots & Shoots] has about 150,000 active groups (and a group can be a whole school) – that’s a lot! – Jane Goodall

7. Be open-minded. Always.
“There was a ‘closed’ scientific attitude telling me that chimps didn’t have minds or emotions, because only we have them. In 1960, it was thought there was a difference in kind between us and the other types of animals — but in fact it’s degree. I try to live being ready to learn — whether it’s from animals, plants or people.” – Jane Goodall
8. Each day, respect all living things.

“[Having spent my career learning about the interconnectedness of people, animals and the environment], the key takeaway action for me is respect [for all of the above].” – Jane Goodall

9. Build a list of must-do experiences and places to see, because sometimes, the promise of getting there is the only thing keeping you going.
“There are lots of places I’ve never been that I would still like to see, places like Papua New Guinea, Philippines, Madagascar, parts of the Amazon.” – Jane Goodall

10. Never stop seeking your special place to dream — whether it’s the most remote rainforest or in a comfy reading nook by a window in your house.
“My favorite place in Africa is Gombe … as it was. I loved being in the middle of the Congo basin in a forest that had never been logged. That was magical.” – Jane Goodall

Thank you Kristi for these amazing resolutions! They are officially mine for 2015 as well! Please go read Kristi’s full article at Huffington Post for a little New Year’s inspiration!

An incredible talent
Next Post: Amazing strobes animation made out of chocolate