You are here: Home / All We Need Is Love / Pets and Animals / 2017 New York Pet Fashion Show Presented by TropiClean http://nypetfashionshow.com/ 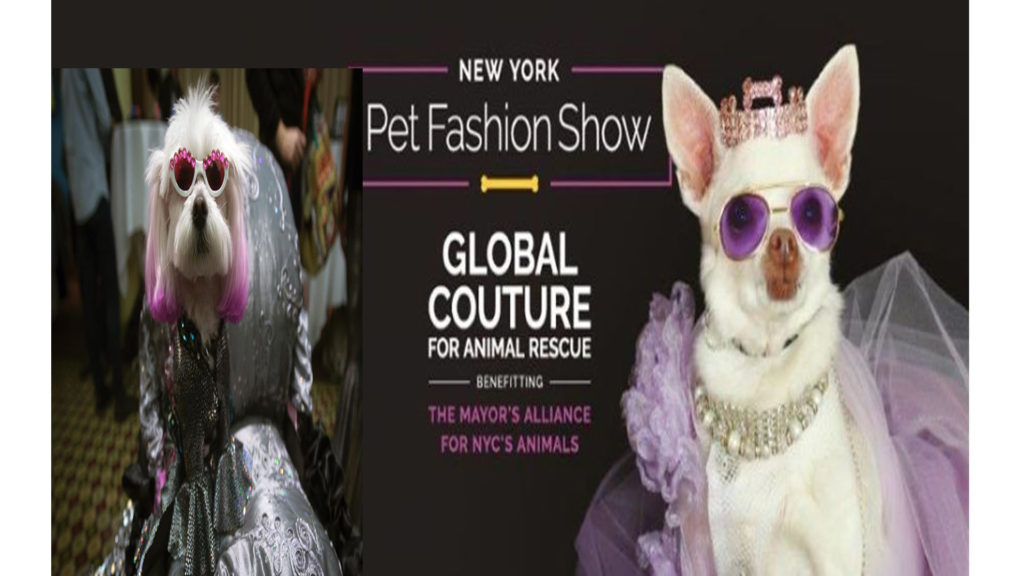 Special Guest Appearance with the “Best of Broadway”

Welcome to the largest pet fashion and animal rescue benefit in the country!
An Animal Rescue Benefit like No Other!

Join us on February 9th 2017, 6-11 PM at the Historic Hotel Pennsylvania in NYC.
This show will benefit the Mayor’s Alliance for NYC’s Animals www.animalalliancenyc.org

The 2017 NYPFS Presented by TropiClean is a celebration and dedication to the Couture Style of our World to Rescue our Animals in need and Honor our Planet. Bring out your inner Style to help raise awareness!

A portion of the proceeds will go to benefit the Mayor’s Alliance for NYC’s Animals, that is dedicated to providing a higher quality of life & “Forever Homes” for our companion animals. We are proud to have Hamptons Pet “The Global Luxury Pet magazine” as our media sponsor.
Don’t Miss (4) Extraordinary Fashion Runway Shows…

Gregg R.Oehler, a veteran of the dog publishing beat, brings over 35 years of experience to the job. As a 30-year publishing executive, Gregg has been involved in over 50 magazine start-ups. Gregg is President of Pet Media PR, Canine Health & Wellness, and The New York Pet Fashion Show’s parent company Oehler Media Inc., a publishing, media, marketing and advertising firm based in New York City.

He is currently the publisher of Hamptons Pet – The Global Luxury Pet Magazine and is the former publisher of Cesar’s Way Magazine from TV’s Dog Whisperer, Cesar Millan. He has been publisher of New York Dog Magazine, the Metropolitan Dog Club’s Blue Book, and Hollywood Dog magazine. He has acted as Executive Director of Petstyle.com and Sales Director for both FIDO Friendly magazine and DoggedHealth.com. Gregg has also been the media director of Pet Fashion Week.

He has appeared on “Good Morning America,” CBS’s “The Early Show,”NBC’s “The Today Show”, “Dateline” on NBC, “Jane’s New York,” CNN, “Fox & Friends,” and “Martha Stewart Apprentice.” For the past 8 years Gregg has served on the National Advisory Board for the North Shore Animal League America , he also serves on the Advisory Board of the Pet Philanthropy Circle, and Animal Aid USA. He is a long time volunteer with various animal shelters and rescue groups and has developed strategic marketing programs to help these institutions. Gregg is a proud parent to his 12 year old Boston terrier named Gracie.

Ada Nieves is a renowned Certified Pet Fashion Designer,Animal Talent Manager and Pet Stylist that has worked at TV shows like Animal Planet’s from Underdog to Wonderdog, NBC 30 Rock, E! Ice Loves Coco and recently featured at CBS The David Letterman Show. Also did the re-enactments of most memorable moments of the VMA’s for MTV that includes a meat dog outfit replica of Lady Gaga’s infamous meat dress.

Runs the largest Chihuahua group in the nation, Host her Pet Life Radio talk show:Vida Doggie, writes for the examiner and is a colaborator for The Chihuahua Connection Magazine and All About Chihuahua Magazine.

She created the first Dog Oscars Gowns that gave her international recognition; they are replicas of the dresses famous actresses like Penelope Cruz & Kate Winslet wore on the Red Carpet for the Oscars in 2005. One of her creations from the “Moulin Rouge” collection was featured at both NY and Brazil Pet Fashion Week gaining international recognition.

Since 2006 Ada has been the dog fashion designer for The New York Pet Fashion Show and Currently is the Creative Director of the show along Co-Chair. In additional her runway shows include ; NYC Major’s Alliance The Adoptapalooza, Christmas Feet at Bryant Park, Fashion Show for the New England Grooming Expo, Sizoo Barcelona 2005, ABC’s Canine Couture, NYC Canine Cruise

Featured in One Nation Under Dog Book by Michael Schaffer as “The Queen of Pet Networking” and a “Connector”. Her dog treats are so creative they have been called Top 10 to have for dogs by shows like K-9 Karma, The Today Show and Forbes.Com.

Maria Milito has been heard on the New York radio and television airwaves for over twenty years. Whether you’re in the Tri-State area listening to Q104.3, New York’s Classic Rock Station or traveling nationwide, one might find it difficult to escape her signature voice as a host on Clear Channel Radio’s Classic Rock network. A top rated New York air personality and the voice of Time Warner Cable’s all-news channel, NY1, Maria was a regular contributor on MSNBC’s Countdown with Keith Olbermann. She also serves as a guest host of NY1’s interactive show, The Call. In 2011, Maria added author to her list of credits with the publishing of “Clarice and Friends…How They Helped Mend the Hole in My Heart,” a collection of emails from her listeners sent to her when her beloved 16 year old pug Clarice passed away. An animal advocate and volunteer for Animal Care & Control of NYC, North Shore Animal League and dozens of other area groups, Maria was honored by the Stray From The Heart organization for her avid support of animal welfare and adoption facilities throughout New York City. Maria can often be found hosting animal fundraisers and charity events including the American Cancer Society’s Bark For Life; Top Hat & Tails to benefit the SPCA of Westchester; St. Barnabas Hospice and Palliative Care Center’s October Tails and the Canine Cotillion to benefit St. Hubert’s Animal Welfare Center in Morristown, NJ. During Super Storm Sandy that affected the Tri-State area, Maria used her airwaves and social media feeds to connect thousands of pet owners with the resources needed to make it through the disaster. Recently, Maria rescued Fredo, a black lab mix from Mississippi, who is acclimating nicely to his new home in the big city.

Wise Condemns the Desecration of Historical Jewish Cemetery
Next Post: Paul J. Zak. Zak, is the founding Director of the Center for Neuroeconomics Studies and an internationally recognized expert on the neuroscience.…video and podcast are here…