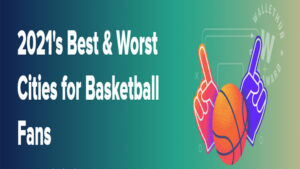 With the NBA playoffs kicking off on May 22 and the NBA recovering from a 50% revenue drop last year due to COVID-19, the personal-finance website WalletHub today released its report on 2021’s Best & Worst Cities for Basketball Fans, as well as accompanying videos.

We speak to Jill Gonzalez of Water hub, Dr. Larry Gluck and Austin G.-S. Tang also share their thoughts. A Good News time was had by all.

To find the best cities for professional- and college-basketball fans, WalletHub compared more than 290 of the largest cities across 21 key metrics, ranging from the performance level of each city’s NBA and NCAA Division 1 basketball teams to ticket prices to stadium accessibility.

Charlotte, North Carolina, has the lowest average ticket price for an NBA game, $32.05, which is 3.9 times less expensive than in San Francisco, the city with the highest at $125.43.

The Houston Rockets have the highest performance level among NBA teams, 68.34 percent, which is 2.3 times better than that of the New York Knicks, the team with the lowest at 29.31 percent.

The Gonzaga Bulldogs have the highest performance level among college basketball teams, 89.87 percent, which is 8.3 times better than that of the Chicago State Cougars, the team with the lowest at 10.85 percent.