THE DOUGLAS WATT FAMILY FUND FOR THE PERFORMING ARTS HONORED 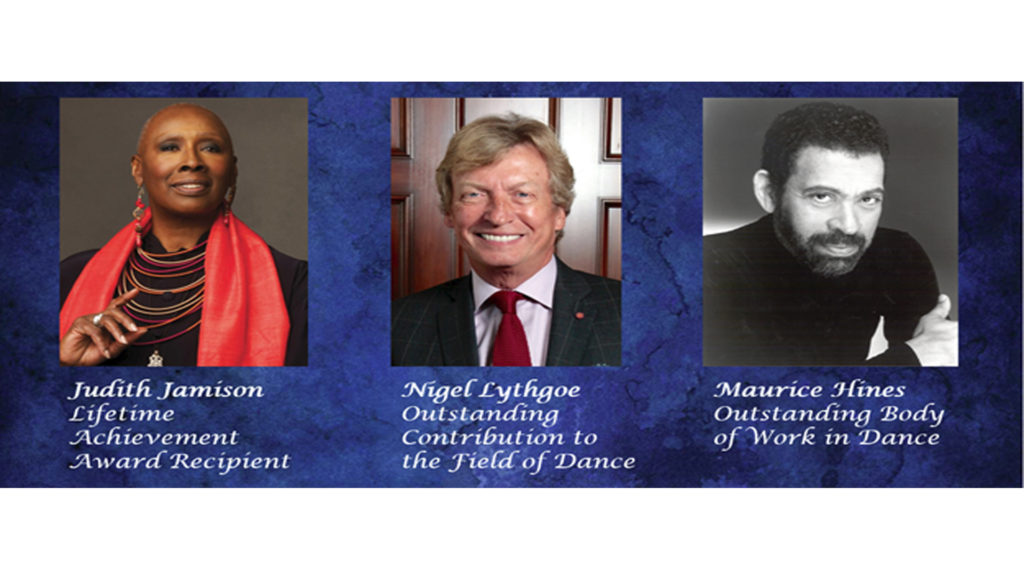 The 34th Annual Fred & Adele Astaire Awards, which recognizes outstanding achievements in dance on Broadway and in film, took place on Monday, May 16, 2016. This year’s Award Recipients included Judith Jamison, Artistic Director Emerita at Alvin Ailey American Dance Theater and Nigel Lythgoe, Creator & Executive Director of So You Think You Can Dance. Choreographer Maurice Hines received a special award for his body of work in the field of dance. Dr. Joan Fallon also received an award for special achievement in the field of autism and related disorders.

The gala evening, which was held at the Skirball Center for the Performing Arts in New York, commenced with a Red Carpet & VIP Cocktail Reception followed by the Performances & Awards Ceremony, after which a VIP After Party was held at the Hebrew Union College to which some 350 award recipients, performers and well-wishers attended. Over the course of the night, a number of special performances were made.

All proceeds from the event will benefit non-profit 501 c(3) organization The Douglas Watt Family Fund for the Performing Arts, which provides Dance and Movement Therapy for autistic and disabled children in New York City. The goal of the organization is to bring artistic expression to the developmentally disabled children in our community. The event was produced by Patricia Watt, NYC Dance Alliance, Fred Astaire Studios and consulting producers Todd Allan and Beth Bogush, with Associate Producers Jessica Zippin and Alix Michel.

The evening started off with the Latin inspired performance “Tradición” from the musical On Your Feet, written by Emilio Estefan and Gloria Estefan and choreographed by Sergio Trujilo. This was followed by a welcome speech from Patricia Watt and Joe Lanteri, after which the Special Achievement in the Field of Autism and Related Disorders Award was bestowed on Dr. Joan Fallon. This announcement was followed by a few words from Jessica Zippin about the organization’s Dance & Movement Therapy Program and the big difference it makes in the lives of children with autism and severe cognitive dysfunction.

Next was the evening’s second performance “Let’s Face the Music & Dance” by The Fred Astaire Dance Studios, choreographed by Steven Powell. The lively dance performance featured music from Lady Gaga and Tony Bennet.

For the first time this year, the Fred & Adele Astaire Awards recognized excellence in dance, movement, and choreography Off-Broadway. The Off-Broadway awards for the 2015-2016 season were presented next by Jackie Hoffman and Randi Zuckerberg.

The performance “A Humble Tribute” was then performed by dancers (and also choreographed by) Leo and John Manzari.

Next, Choreographer Maurice Hines, who appeared Off-Broadway this season in his show Tappin’ Through Life, was recognized with a special recognition award for Outstanding Body of Work in Dance. In his remarked he told the audience of how “my final work was choreography of ballet dancers for Stevie Wonder and I was working through the project a life-time of memories and experiences came flooding back.”

The third special award recipient of the evening was Nigel Lythgoe, Creator & Executive Director of So You Think You Can Dance. In accepting the award for Outstanding Contribution to the Field of Dance he noted self-deprecatingly that, “I was the original Billy Elliot. I could take dance lessons only if I took boxing lessons also – after three broken noses dance and choreography became my true focus”.

The performance “For a Sophisticated Lady” was then held by Francesca Harper and Desmond Richardson, staged by Chet Walker and with music by Duke Ellington. After this, an excerpt from CRY (1971) was performed, choreographed by Alvin Ailey and restaged by Masazumi Chaya.

The fourth and last special award of the evening, presented by Patricia Birch and Joel Gray, was given to Judith Jamison, Artistic Director Emerita at Alvin Ailey American Dance Theater. When awarded the Douglas Watt Lifetime Achievement Award she noted that, “People always ask me ‘why did you want to be a dancer?’ to which I reply that I always felt I needed to be a dancer.”

Thereafter, the award for Outstanding Ensemble in a Broadway Show was presented by Christopher Gattelli, and included: Bright Star, Dames at Sea, Fiddler on the Roof, Hamilton, On Your Feet, School of Rock, She Loves Me, Shuffle Along and Spring Awakening, with the Award being presented to Shuffle Along.

The Awards Ceremony concluded with the performance “Gloria”, featuring a mix of Gloria Estefan music and choreographed by Justin M. Lewis and Mark Orsborn.

The Off-Broadway Committee was comprised of Andy Sandberg (Chair), Jonathan Herzog, Michael Milton, Nikki Feirt Atkins, Judith Jamison, and Lee Roy Reams. The winners were announced on May 16th at the annual Astaire Awards ceremony alongside the 2015-2016 Broadway and Film Awards.

This year’s nominations were announced on Monday May 2nd, 2016.

About The Fred & Adele Astaire Awards
The Fred & Adele Astaire Awards were established in 1982 to recognize outstanding achievement in dance on Broadway and in film. The annual awards were established with the cooperation of Fred Astaire to also honor his sister Adele, who starred with her brother in ten Broadway musicals between 1917 and 1931. The Fred & Adele Awards remain the gold standard for excellence in dance and choreography on Broadway and film. Since 1982, additional awards have been added, including the award for best choreography in film, the lifetime achievement award, and a unique award determined annually for exceptional contribution to the field.