Mark Schulman speaks at the CEO Clubs of America and rocks the event a few years ago, with a timely message for today.

You are here: Home / Good News To Go / Mark Schulman speaks at the CEO Clubs of America and rocks the event a few years ago, with a timely message for today. 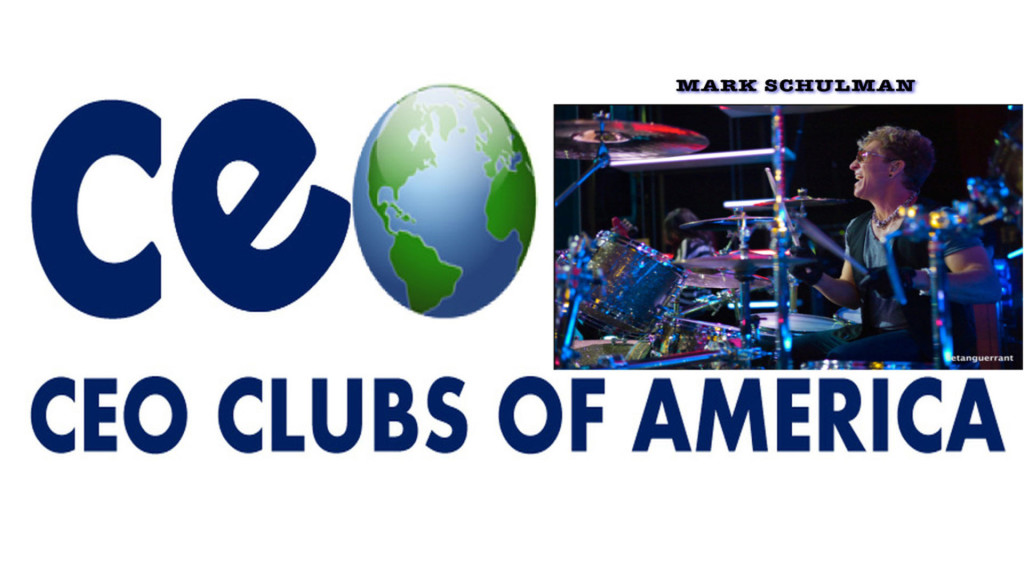 Why Mark? Mark Schulman speaks at the CEO Clubs of America and rocks the event. Good News shares his motivational expertise with this wonderful video. http://markschulman.com http://www.ceoclubsofamerica.com

The workplace is a microcosm of the multicultural world in which we live. The one common denominator among the various cultures, and social and political views is music. It may be the beat, the lyrics, the vocals or a combination of them all that brings diverse people together for common enjoyment. The same is true about Mark’s presentation. An A list celebrity drummer, Mark incorporates performance, audience interaction and participation and video to create the ultimate learning environment.
Mark encourages, challenges and inspires participants to step beyond their perceived limitations. He draws from a wealth of life experiences as a musician, producer, author, published songwriter, philanthropist, cancer conqueror and father to deliver presentations that are completely energizing, entertaining and truly unique.
Additionally, there is no better example of harmony and group dynamics than a top-class band of musicians – think Led Zeppelin, The Rolling Stones or Beatles. Through the use of musical instruments and various team-building techniques, Mark will have even the musical novice participants, learn, thrive and thoroughly lose themselves in the harmony and sound of their musical band. That’s why Mark’s experience and knowledge as a world-class performer is the ultimate team-building metaphor.
Mark’s content is entertainment that’s fun, exciting and workplace appropriate. He has been called a combination of Tony Robbins, Bono and Ringo!
About Mark:

Born and raised in L.A., Mark Schulman became interested in pursuing music as a mere toddler. At age 3, he witnessed the phenomenon of Beatlemania: “…I remember seeing a repeat of The Beatles on the Ed Sullivan show with my brother and my folks. I saw Ringo playing the drums and something resonated so deeply with me. Then I saw all the screaming girls, and at that moment, I thought to myself, ‘I want THAT!”
Mark has enjoyed an unprecedented career over the last 26 years as a first call drummer for world-class rock and pop artists. He has been voted ‘Top 3 Pop-Rock Drummers’ in the 2014 Modern Drummer Reader’s Poll. Having finished his third record breaking world tour with P!NK (featured in that new DVD, ‘The Truth About Love Tour’ as well as DVDs from her ‘I’m Not Dead’ and ‘Funhouse’ tours.) Mark has joined CHER for her ‘Dressed To Kill’ World Tour 2014.
Mark’s resume reads like a “Who’s Who” of international Rock n’ Roll royalty including acts such as FOREIGNER, SHERYL CROW, STEVIE NICKS, DESTINY’S CHILD, BILLY IDOL, CHER (Mark was drummer on the ‘Believe’ and ‘Farewell’ tours, two of the most-attended tours in music history) UDO LINDENBERG and EIKICHI YAZAWA. He has drummed with VELVET REVOLVER at Ozzfest and for crowds of 200,000 at Glastonbury Festival with SIMPLE MINDS. Mark is the recipient of numerous Gold and Platinum discs and has appeared on nearly every American and European variety show on television including The Grammys, David Letterman, The Tonight Show, Conan O’Brian, Jon Stewart, American Idol, Paul O’ Grady, X-Factor, Wetten Das and more.
Schulman is a classically trained cellist and as a teen, played with the Los Angeles Junior Philharmonic. He played cello on the 2009/2010 P!NK tour! He is also a music producer, trained audio engineer and studio co-owner of WEST TRIAD RECORDING STUDIO in Venice, California. As an active educator, Mark taught at the LOS ANGELES MUSIC ACADEMY and as one of the world’s most sought after drum clinicians hosting clinics in countries around the world. Mark produced his first DVD in his studio entitled, ‘A Day in the Recording Studio; A Do-It-Yourself Guide to Recording Great Drum Tracks for Drummers and All Musicians’ distributed by Hudson Music. The MARK SCHULMAN SIGNATURE SNARE DRUM is the best selling signature product n the history of Gretsch.

Music is not Mark’s only driving force; he was the chairman of the board of directors of Create Now!, a non-profit organization founded in 1996, to help change troubled children’s lives through creative arts mentoring. A cancer survivor himself, Mark has also motivated children and teens through his work doing seminars with the RONALD McDONALD HOUSE and benefits for the TEENAGE CANCER TRUST in the UK.

Chef Ken Megarr talks to Good News at the 2016 CES Show in the Home/Kitchen Appliance section at the Panasonic booth. Also we share a technology demonstration of the future of our “New Home” that Panasonic has created call Ora. 2017 CES is happening today, in Las Vegas, so keep your key s out for some the newest and latest technology.
Next Post: Corporate Angel Network Celebrates 50,000th Patient Flight. Working to save clhildren.