You are here: Home / Good News To Go / A New Book By A Children’s TV Research Consultant Celebrates Over 50 Years Of The Longest-Running

Listen to “A New Book By A Children’s TV Research Consultant Celebrates Over 50 Years Of The Longest-Running” on Spreaker. 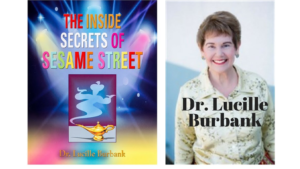 Elmo. Miss Piggy. Kermit the Frog. Big Bird. Cookie Monster. Oscar the Grouch. These are some of them most lovable characters to ever come across a television screen. How did the first – and all-time best – educational television show mange to make learning fun? Through decades of social change, how did Sesame Street navigate multiple generations to better understand serious issues and learn educational skills, from bullying, love, racism, and charity to knowing numbers, mastering letters, speaking, and telling time?

A new book, The Inside Secrets of Sesame Street, 3rd Edition, penned by a children’s media educational consultant of 30 years who conducted research for a decade for Sesame Street, reveals a behind-the-scenes look at what made Sesame Street the most-watched, best-beloved, award-winning program for children during a golden era of programming.
“Sesame Street not only entertains millions of children, it educates them,” says author Dr. Lucille Burbank. “Back in 1969 when the show launched this was an amazing feat – and the formula for success has lasted for more than a half-century. My book takes a nostalgic look at the show that raised several generations of America – and the world – revealing the secrets of television pioneers and visionaries that helped young children learn about the world from the security of their living room couch.”
Her book takes us back to another era and time, both for American families and television, bringing us into the creative corners of the memorable characters and individuals who birthed the greatest educational show in the history of television. She features in-depth and insightful interviews with many of the show’s creative forces, some of whom are now deceased, including:
 Joan Clooney, the show’s creator
 Caroll Spinney, puppeteer for Big Bird
 Actor Bob McGrath
 Producer Jon Stone, called the “Soul of Sesame Street”
 Jane Hanson, wife and creative partner of muppet master Jim Henson
 Jeff Ross, known for his popular song, “Rubber Duckie”
Many of these interviews took place when she was getting her doctorate from Temple University. She also had studied and interviewed the leaders of other hit children’s television shows, Captain Kangaroo and Mister Rogers’ Neighborhood.
Dr. Burbank, whose book is a Mom’s Choice Awards winner, reveals the following:
• What made Sesame Street a wildly successful show – and why it is still needed today.
• The challenges the show – in its early days – had to overcome.
• Why we need shows like Sesame Street, to entertain and educate us.
• How Sesame Street confronts huge issues like gender identity, bullying, war, and racism.
• What parents and educators can do to inspire a healthier and smarter generation
• Why we need a show like Sesame Street, which caters to preschoolers, to address the needs and challenges of 8-12year-olds.
• What parents need to know about digital media – and what they should be teaching their kids in order to safely navigate the Internet.
“My purpose in writing a book is to disseminate the knowledge and wisdom given to me by the creators – the pioneers – of Sesame Street,” says Dr. Burbank. “Each interviewee spent a lot of time carefully answering my questions, and to each, I am eternally grateful.”
No other children’s show has won the number of Emmy’s, garnered the hundreds of millions of viewers, or received the critical acclaim that Sesame Street has. Why did Sesame Street outlast and outdo all other children’s series? The Inside Secrets of Sesame Street, 3rd Edition answers that question while allowing for parents and educators to fondly look back at a legendary show that continues to make history.

Dr. Lucille Burbank
Biography
Dr. Lucille Burbank is a successful educational media consultant and author. Based on her behind-the-scenes work in the research division of Sesame Street, where she met with the show’s head writer to make important script changes, she wasted the definitive 50-year celebration of the historic children’s program, The Inside Secrets of Sesame Street, 3rd Edition.
The recipient of a doctoral degree from Temple University, Dr. Burbank has worked n educational media and technology towards the advancement of education and special education for several decades. Receiving a scholarship while earning her doctorate, allowed her to conduct a much larger dissertational study on three prominent children’s television shows: Captain Kangaroo, Mister Rogers’ Neighborhood, and Sesame Street.
Burbank was recently honored as Author of the Decade and inducted into the hall of fame of The International Association of Top Professionals. She received the Albert Nelson Maquis Lifetime Achievement Award, was named Top female Executive by Worldwide Branding, and has served as a delegate for the International Women’s Leadership Association.
Her impressive repertoire of work experience included consulting for the Sesame Workshop, NASA, and the New Jersey Department of civil Service. Dr. Burbank taught media design and production courses at community colleges and was a media/technology coordinator for the Eastern Pennsylvania Regional Resource Center for special Education. She wrote numerous articles on educational media and technology.

Awesome Film about love between animals
Next Post: Four Days With Kenny Tedford: Life Through the Eyes of a Child Trapped in a Partially Blind & Deaf Man’s Body By Paul Smith and Kenny Tedford Jr.