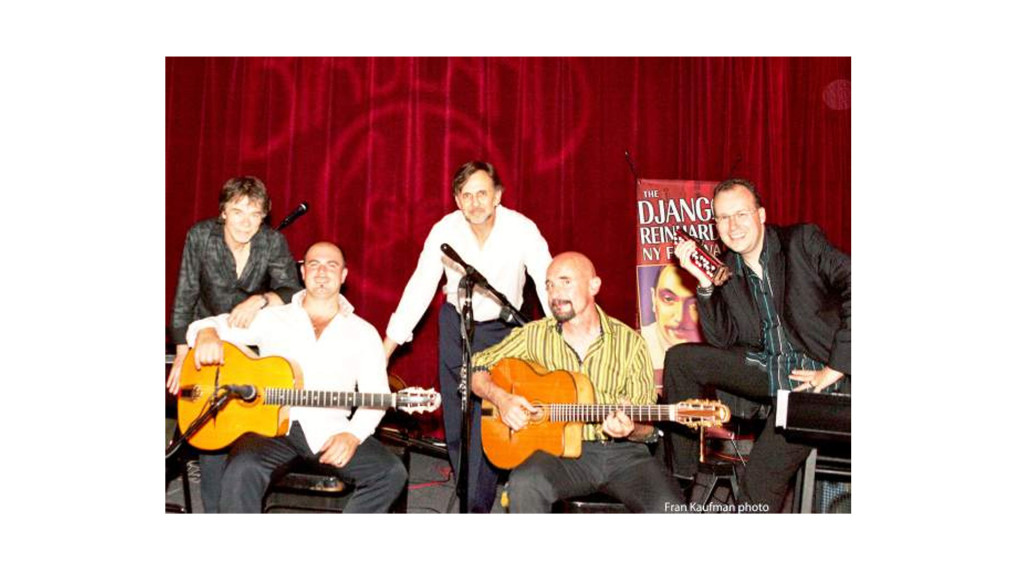 ‘HOT HOT JAZZ’
A special piece will be performed in tribute to Ettore Stratta
DORADO SCHMITT and his young son AMATI return to the US to tour with ‘5’ concerts at the San Francisco Jazz Festival, The Kennedy Center, NJPAC James Moody Jazz Festival, and more, winding up at their home BIRDLAND November 17-22. Birdland launched the Festival in 2000 , now in its 16th successful year! The Festival has been produced by Pat Philips & Ettore Stratta.

Over the years, a top Jazz band in the style of Django has evolved onstage at Birdland at the Django Reinhardt NY Festival. It carries on the legacy of legendary gypsy guitarist DJANGO REINHARDT in a contemporary style holding on to the joy, hot sounds, and romance of the music inspired by America’s standard repertoire and great musicians such as Duke Ellington, harking back to the 20’s and 30’s in France bringing “Le Hot Jazz” to today where we call it “Hip Hot Jazz”.
AMATI Schmitt was a young boy, 3 years old at the time Dorado started coming to the Festival, now at 19, he is a seasoned player in his own right. DORADO Schmitt, gypsy guitar star and leader, passed on the tradition of Django’s style, as is done in gypsy life from generation to generation, as his Dad did with him teaching guitar and violin. They come from Forbach, France, a gypsy community near Germany where music and family is the center of life.

Over the years, the Producers Pat Philips and Ettore Stratta brought others to the stage joining the Schmitts such as Ludovic Beier , accordionist and accordina musician, and Pierre Blanchard, violinist…DouDou Cuillerier, rhythm guitarist and mean scat singer….henceforth the evolution of this spectacular band many years in the making along with Xavier Nikq on bass (Brian Torff is bassist in the summer). The band is in demand across the country for major tours 2X a year .

There will be a special piece dedicated to the life and tremendous talent and career of Maestro Ettore Stratta, co-founder of the Festival, partner and beloved husband of Pat Philips (Stratta).
***********************
Each night there is a Special Guest as follows:
November 17: Bria Skonberg/trumpet & vocals
18: Anat Cohen
19: Jorge Continentino/flute
20: Joel Frahm/sax
21: Borislav Strulev/cello
22: Cyrille Aimee/vocalist
***********************
About the Django Festival Allstars!-at The Newport Jazz Festival
“A Standout performance” !
Ludovic Beier -“played like an angel, heart wrenching and as good a solo as was heard at Newport” ………. Allen Morrison… Downbeat Magazine