You are here: Home / All We Need Is Love / Overcoming Obstacles / Alcides Soares 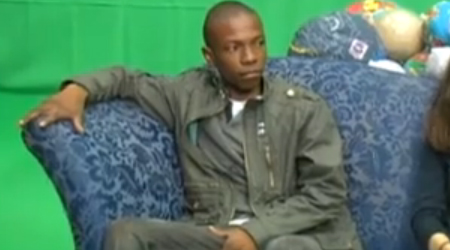 Come see the world through my eyes
Alcides Soares, age 16, Mozambique and he shares his thought at the Good News Broadcast studio.

teen homelessness.
In My Shoes (based in New York City)

(New York, May 29, 2009) The world premiere of the second edition of Youth Producing Change, an innovative program

of youth-produced short films from across the globe, will be presented on June 19-20, 2009, by the Human Rights

Ten films will be shown this year, selected from over 300 international submissions.

Armed with digital cameras and their own boundless creativity, the first-time filmmakers featured in the series

bravely expose some of the most pressing human rights challenges of our day, tackling such issues as child labor,

homelessness in New York City. All of the films were produced by filmmakers who were under the age of 19 at the time

to Mozambique will make the trip to the festival to present their films to local audiences, advocating for their

issues and sharing their production experiences.

It is my hope, and that of my crew, that through the exposure of In My Shoes at the Human Rights Watch

International Film Festival, audiences will gain sensitivity and become aware of the growing issue of youth

homelessness and be inspired to address the issue in their communities, said Zanetta King, 17, of New York.

Enabling young people to comment on the issues that matter to them, to their communities, and ultimately, to our

world is a primary goal of the Adobe Youth Voices program, and the reason why were proud to support the Human

Systems Incorporated and executive director of the Adobe Foundation. The festival provides the ideal stage for

youth to express themselves, and to inspire a dialogue for change.

The festival will hold a youth news conference for the young filmmakers from 4 to 7 p.m. on June 19 in the Furman

Gallery of the Walter Reade Theater. The Youth Producing Change filmmakers visiting the festival will participate in

for this exclusive event is free, and is open to members of the press and youth-based organizations.

To watch a trailer for the Youth Producing Change program, please visit:

Sahar Shakeri, 19 years old, Thoughts in a Hijab (based in Seattle)

(based in New York City)

Various teen filmmakers, Its Not About Sex (based in New York City){enclose last_guy.mp4}