Author Debbie Macomber, Debbie is one of America’s most prolific writers of books, TV and Film. Here is an oldie but goodie interview! Click Here for Video & Podcast…

You are here: Home / Arts & Leisure / Media / Author Debbie Macomber, Debbie is one of America’s most prolific writers of books, TV and Film. Here is an oldie but goodie interview! Click Here for Video & Podcast… 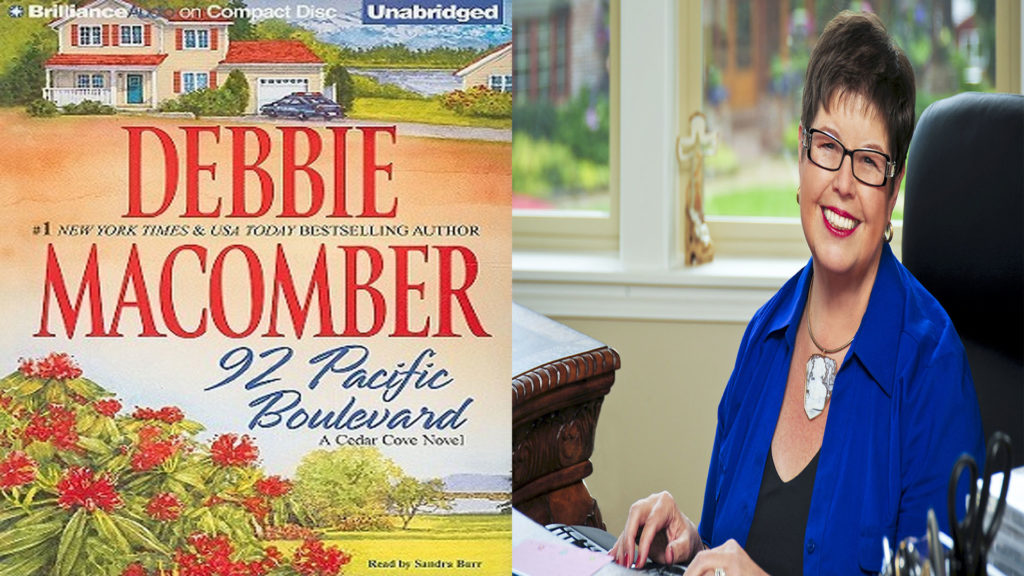 THE World’s Leading Voice in Women’s Fiction and One of America’s Favorite Storytellers,

Reveals to Your Viewers

Based on Her Novels’ Characters’ Favorite Meals and, as Debbie Affectionately Calls It,

With an astounding more than 100 million copies of her books in print throughout the word, “New York Times,” “USA Today,” and “Publisher’s Weekly” bestselling author Debbie Macomber, who has penned more than 100 books, is delighting readers throughout the nation yet again with her highly-anticipated new novel, “92 Pacific Boulevard”~which will be available wherever books are sold in September, 2009~ and is delighting tantalizing their tastebuds with her scrumptious new cookbook “Cedar Cove Cookbook” !

In Debbie’s new highly-anticipated novel “92 Pacific Boulevard” (which will be available wherever books are sold in September,
2009) set in a fictionalized version of Debbie’s own hometown in Washington state, fans of Debbie’s award-winning Cedar Cove books will delight in this newest addition to the popular series! As readers reacquaint themselves with the residents of their beloved Washington town, they will relish the lives and relationships of their favorite characters (and some new ones).

In Debbie’s new cookbook “Cedar Cove Cookbook” (which will be available wherever books are sold in September, 2009) featuring 130 recipes of classic home cooking that Debbie affectionately calls “real food for regular people,” Debbie brings together her love of cooking and eating together with her passion for writing. Inspired by her immensely popular Cedar Cove series where family meals and celebrations are common occasions, “Cedar Cove Cookbook” brings the kitchens in her novels to life~featuring recipes of all of her characters’ favorite meals.

Both “92 Pacific Boulevard” and “Cedar Cove Cookbook” will be officially released at the Cedar Cove Days festival (occurring from August 26th through 30th) in Port Orchard, Washington~Debbie’s hometown and the basis for her world-famous fictional town of Cedar Cove! Cedar Cove Days, which will transform the town into the fictional community of Cedar Cove to celebrate its fame and popularity, is a Debbie Macomber-inspired literary festival that invites thousands of fans from throughout the nation to come and enjoy the town depicted in the pages of their favorite novels!

Debbie Macomber’s award-winning work has appeared in the number one position on every major bestseller list, including the “New York Times,” “USA Today,” and “Publisher’s Weekly”! She is a multiple award-winning author who has written and published more than 100 books and has more than 100 million of her books in print worldwide! In September 1999, Debbie first achieved a career writing goal when her MIRA title “Promise, Texas” scored the triple crown of publishing. This book, which revisited her “Heart of Texas” series, made the “New York Times,” “Publishers Weekly,” and “Top 50 ‘USA Today'” Bestselling Books lists. Since then, eight other Debbie Macomber novels have also scored the triple crown! Debbie, who is dyslexic, wrote all of her first books in her kitchen on a rented typewriter and struggled for five years to have any of them published. Eventually her work and determination paid off and her first manuscript “Heartsong” was published by Silhouette Books in 1982~becoming the first category romance ever to be reviewed by the prestigious trade magazine “Publisher’s Weekly.” Debbie was soon featured in “Newsweek” magazine, and the rest is history!

Debbie is nationally-renowned for her ability to create compelling characters and bring their stories to life in her books. Drawing on her own experiences and those of her family members and friends, Debbie demonstrates an almost uncanny ability to peer into the souls of women and express their emotions, values, and concerns. Debbie lives with her husband in Port Orchard, Washington and Vero Beach. Florida.

To learn much more about Debbie Macomber, please visit her official website www.debbiemacomber.com.

Thought for the Day…
Next Post: Sandra Lee asks “Do you have Fast, Festive Fun Holiday Recipes?” Food is always Good News, here is our interview from years ago, Still tastes Good!! Click Here for Video & Podcast…