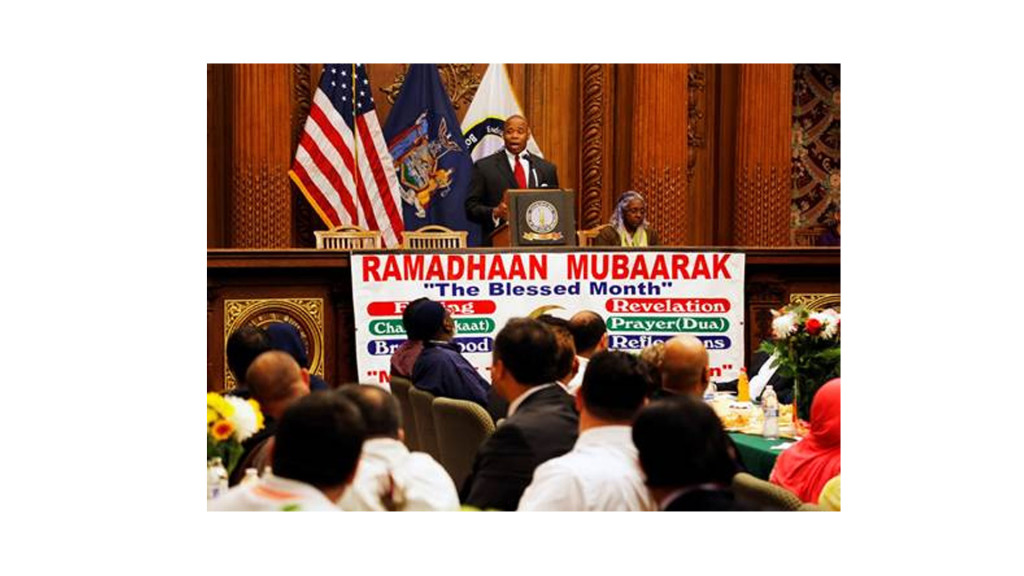 BROOKLYN, NY, July 17, 2015: Today, Brooklyn Borough President Eric L. Adams joined Muslim Brooklynites in celebrating Eid al-Fitr, marking the end of the holy month of Ramadan. Last Thursday, he hosted an Iftar dinner in the courtroom of Brooklyn Borough Hall to break the daily Ramadan fast with over a hundred Muslim Brooklynites, including local religious leaders and ambassadors from Middle Eastern and Asian nations; over twenty-five area mosques and cultural organizations sponsored the celebration, which recognized a number of community members for their advocacy and support of issues affecting Muslim-Americans. Borough President Adams emphasized the importance of highlighting the borough’s religious diversity and strengthening interfaith ties.

“Our Muslim brothers and sisters are valued members of One Brooklyn, and we honor their commitment to faith and charity in this holy month of Ramadan,” said Borough President Adams. “Observances such as these are important times to celebrate our diversity and learn from each other’s traditions, embracing all that unites us. The desires to advance one’s ability to reflect inward and maintain self-control are not only intrinsic to Ramadan, but are universal aspirations. I hope this Ramadan was a positive spiritual opportunity, shared with family and friends, for all who practice. Eid Mubarak!”

Brooklyn Borough President Eric L. Adams addresses over a hundred Muslim Brooklynites, including local religious leaders and ambassadors from Middle Eastern and Asian nations, as he broke the daily Ramadan fast at an Iftar dinner he hosted in the courtroom of Brooklyn Borough Hall; sitting next to Borough President Adams is Dr. Khadijah Abdul-Matin, who served as the event’s MC.

Good News also celebrated Ramadan with our Muslim Brothers and Sisters, We are all one. Reverend Paul