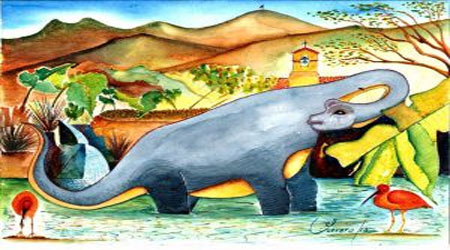 Just about 154 millions years ego before any human being step in Earth, there he was our friendly Apatosaurus with his massive weight, Long Neck and Long Tail. Ready to make millions of friends in our small Village of San Juan Capistrano next to the familiar Tower Bell of the Mission & the USA Flag on the Hill Land marks of our town .

Knowing that our Apatosaurus is not unknown in the USA he actually was part of it, in several States throughout the country.

Apatosaurus ( /əˌpætɵˈsɔrəs/), also known by the popular but scientifically redundant synonym Brontosaurus, is a genus of sauropod dinosaur that lived from about 154 to 150 million years ago, during the Jurassic Period (Kimmeridgian and early Tithonian ages).[1] It was one of the largest land animals that ever existed, with an average length of 23 m (75 ft) and a mass of at least 23 metric tons (25 short tons).

Apatosaurus excelsus (originally Brontosaurus) was named by Marsh in 1879. It is known from six partial skeletons, including part of a skull, which have been found in the United States, in Colorado, Oklahoma, Utah, and Wyoming.

Apatosaurus louisae was named by William Holland in 1915 in honor of Mrs. Louise Carnegie, wife of Andrew Carnegie who funded field research to find complete dinosaur skeletons in the American West. Apatosaurus louisae is known from one partial skeleton which was found in Utah in the United States .

Guevara’s Center for the Arts & Culture

And let me know how you can help to open this
Center that will specialize on “Therapy through Art”
For children with Special Needs and Batter Woman.

This is how you can help, start your Collection of Guevara’s Cards for $10 Dollars for a great organization in the process and “Help us to Help”.

Guevara’s Submissions to the Million Dollars Art Show at the Venetian Las Vegas Nevada “The Arty”.

The “Guevara’s Art En Las Vegas Nevada en “The Arty 2013″” story is up under art: http://goodnewsplanet.com/the-arty-2013-at-las-vegas-vote-for-guevaras-paintings/

International Exhibit Organizer Los Rios Street since 1994 establish the Art Walk show in the Play House, The Mission, Specially the most know Art Exhibit Dia de los Muertos Day of the Dead Celebration at the  Library over 3.500 people attended the first Art Show

Artist in the biggest Art Show in the World “The Arty” at Las Vegas Nevada at the Venetian Hotel & Casino April 2013.

Member of the California Art Club

President of the Capistrano Art Club

Guevara’s Center for the Arts & Culture