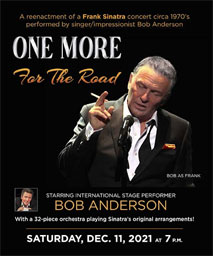 Listen to “CELEBRATE FRANK SINATRA WITH BOB ANDERSON’S #1 RATED REENACTMENT CONCERT: “ONE MORE FOR THE ROAD” ONE-NIGHT-ONLY IN STERN AUDITORIUM / PEREL” on Spreaker.

“A perfect night–like seeing Sinatra at his best. Frank would have loved it.”
– Tony Bennett
CELEBRATE FRANK SINATRA WITH
BOB ANDERSON’S
#1 RATED REENACTMENT CONCERT:
“ONE MORE FOR THE ROAD”
ONE-NIGHT-ONLY
IN STERN AUDITORIUM / PERELMAN STAGE AT CARNEGIE HALL
SATURDAY, DECEMBER 11, 2021 AT 7:00 PM
New York, NY (November 1, 2021) – ONE MORE FOR THE ROAD, the award-winning authentic reenactment concert honoring the music of Frank Sinatra and starring Bob Anderson, a singer, actor, and the number one singing impressionist in the world, will play in the Stern Auditorium / Perelman Stage at Carnegie Hall for one-night-only, on the eve of Sinatra’s 106th birthday, Saturday, December 11 at 7:00 PM.
This must-see show, in which fans experience Frank and his music at the peak of his career, honors the musical legacy of Frank Sinatra and his tremendous contribution to the Great American Songbook. Tickets are now available at carnegiehall.org.
The captivating production features a 32-piece orchestra, Sinatra’s original charts of his most-beloved songs, the work of Academy Award and Emmy Award-winning makeup artists and singing impressionist Bob Anderson–who not only sounds like Sinatra, but looks like him too. During Anderson’s residency of FRANK The Man The Music at the Palazzo Casino in Las Vegas he won Best Headliner, Best Live Performance and Best Live Show.
ONE MORE FOR THE ROAD, the second tour, is presented by Twin Palms Entertainment and Bob Anderson Productions. Tickets for this one-night-only performance (priced $50 – $200) are now available at carnegiehall.org | CarnegieCharge 212-247-7800 | Box Office at 57th and Seventh. One More For The Road runs approximately 90 minutes with no intermission.

VH1 voted Bob Anderson the number one celebrity impersonator in the world––an honor that was also given to him by People Magazine. In addition to his exacting impressions, he is a highly acclaimed singer in his own right. Anderson’s story reads like a classic novel. In 1973, he snuck into the Sahara’s Congo Room to watch a Nancy Sinatra rehearsal. During that rehearsal, the Everly Brothers (Nancy’s opening act) got into an argument and walked out. Enter 23-year-old Anderson, who told the musical conductor that he was a singer; with only a few hours until the start of the show and no opening act, Nancy Sinatra’s producer handed Anderson a mic and let him prove himself. He did: Anderson went on in place of the Everly Brothers and played the entire two-week engagement at the Sahara.
Shortly after that engagement, Anderson accompanied Nancy Sinatra to “The Merv Griffin Show,” his first appearance on national television, for which he received a standing ovation. Merv Griffin was impressed, and months later, after seeing him perform at the Ye Little Club in Beverly Hills, Griffin invited Anderson to his 50th birthday celebration. It was at Merv Griffin’s party where Anderson started singing and imitating the voices of well-known vocalists. The crowd loved it. Cary Grant was sitting on the floor by the piano, saying, “This is really amazing; I have never seen anything like this!”
Anderson soon became a regular on talk and variety shows, with more than 200 appearances on television networks and shows including “The Mike Douglas Show,” “The Merv Griffin Show,” “Late Night With David Letterman,” “The Tonight Show With Johnny Carson” and on Showtime and HBO. He has performed in more Las Vegas showrooms than just about anyone. When Las Vegas celebrated 50 years of entertainment, Bob Anderson was voted number 12, between Barbra Streisand and Ray Charles, on a list of Vegas’ all-time-favorite acts.
Anderson wrote and starred in the award-winning show, FRANK The Man The Music at The Palazzo Theater in Las Vegas. Within weeks of opening, FRANK became the talk of the town and the must-see show. The running theme and spirit of every review was, “I saw Frank Sinatra the other night. I don’t care if it was Bob Anderson–I saw Frank Sinatra the other night.”
# # #
bobanderson.com facebook.com/bobandersonmusic