Listen to “Celebrating 113 Years of ARMY Reserve Service” on Spreaker. 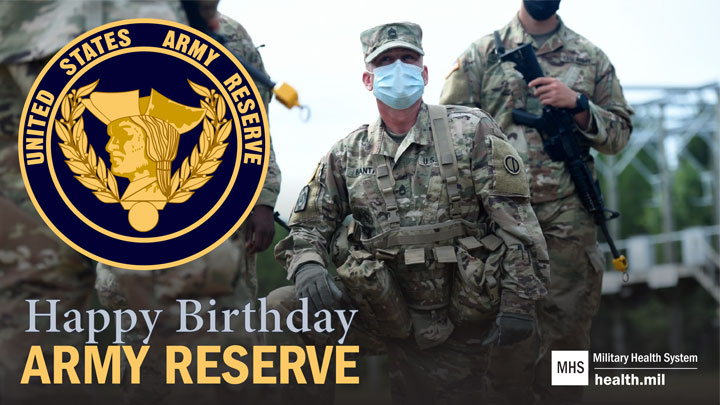 On April 23, 2021, the Army Reserve will celebrate 113 years of history in service to the Army and the Nation. This year’s birthday theme is “Celebrating the Courage of the Army Reserve Soldier.” Beginning as a small corps of medical professionals, it has evolved into what is the best trained, best equipped, and most ready Army Reserve in our Nation’s history.

For over a century, at home and abroad, operation and emergency, the dedication and courage of Army Reserve Soldiers have never failed to meet the challenges of the time.

· With nearly 200,000 Soldiers and Civilians located throughout 50 states, 5 U.S. Territories and 23 Countries, the Army Reserve comprises nearly 20 percent of the Army’s total force, half its total maneuver support, and a quarter of its force mobilization capacity.
· The Army Reserve provides quick access to the trained and ready units and Soldiers the Army needs to fight and win on the battlefield and respond in the homeland in times of crisis or natural disaster.
· The Army Reserve offers more than 120 job opportunities, in fields ranging from Logistics and Military Intelligence to Civil Affairs, Engineering, Cyber, Medical, Legal, Aviation, and many more.

CSM Lombardo earned a Master of Science Degree in the Administration of Justice from the University of Louisville. He is a 2007 Honor Graduate of the prestigious Southern Police Institute and a 2016 graduate of the Naval Post-Graduate Institute Executive Leaders Course. CSM Lombardo is a New York State licensed Emergency Medical Technician and a Nationally Certified Emergency Medical Technician. In his civilian career, he serves as Police Executive holding the rank of Deputy Inspector with the New York City Police Department.
He is a native New Yorker. When not working, he enjoys running marathons, hiking, diving, motorcycling, traveling, and spending time with his wife Elizabeth, an accomplished attorney

Sergeant James Witkowski:
Sgt. James Witkowski, 729thTransportation Company, and 100 fellow Soldiers were transporting supplies through a village in Iraq, October 2005. Insurgents attacked the convoy with small arms, rocket-propelled grenades, mortars and armor-piercing rounds. Through the mile-long ambush, he returned .50-caliber machine gun fire. When a grenade landed inside his turret, Witkowski made the split-second decision to shield his comrades, taking the full brunt of the detonation with his body and saving the lives of three Soldiers. His actions enabled the convoy to clear away with only minor injuries. Witkowski was posthumously awarded the Silver Star, the nation’s third-highest award for courage under fire.

Specialist Justice McBain
The Army Reserve recognizes Wisconsin Soldier for his heroics during off-duty hours
Spc. Justice McBain, an Army Reserve Soldier, received the Soldier’s Medal, the Army’s highest award for heroism outside combat Sunday.
McBain was presented with the Soldier’s Medal for heroic actions back in 2019 following a multi-vehicle crash that resulted in two fatalities on Interstate 94 in Racine, Wisconsin. McBain saved the lives of a civilian and Wisconsin Air National Guardsman Senior Airman Kelvin Yde.
When McBain arrived on the scene of accident, he found Yde pinned between his seat and the steering wheel with the front windshield collapsed. Without hesitation, McBain sprang into action by moving the windshield over to the side, he cut Yde’s seatbelt, and extracted Yde from the car with the assistance other motorists. All of this occurring while a fire from the semi-truck involved in the incident began to spread amongst the other vehicles involved with the crash.
Before rescuing Yde, McBain assisted an individual in another vehicle by helping her get out of the passenger side of the vehicle because flames were present on the driver’s side.
https://www.army.mil/article/245185/the_army_reserve_recognizes_wisconsin_soldier_for_his_heroics_during_off_duty_hours