You are here: Home / Military / CELEBRATING HISPANIC HERITAGE MONTH WITH THE U.S. ARMY RESERVE Unidos: Inclusivity for a Stronger Nation

Listen to “CELEBRATING HISPANIC HERITAGE MONTH WITH THE U.S. ARMY RESERVE Unidos: Inclusivity for a Stronger Nation” on Spreaker. 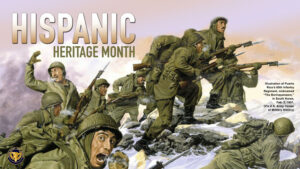 http://usar.army.mil/
The U.S. Army Reserve joins the nation in celebrating National Hispanic Heritage Month by recognizing the contributions of Hispanic Americans to the Army, society and culture. Today, just as in generations past, Hispanic Soldiers can be especially proud of their achievements and embodiment of core Army Values.

The Army Reserve story cannot be told without reflecting on the remarkable impact made by Hispanic Soldiers. Hispanic Americans have a proud legacy of military service dating back to the Civil War. Whether their heritage can be traced to Spain, Cuba, Puerto Rico, Mexico, or one of dozens of other Spanish-speaking countries or cultures, they’ve answered the “call to duty,” defending America with unwavering valor and honor. The theme for the 2022 Hispanic Heritage Month, “Unidos: Inclusivity for a Stronger Nation” underscores the Army’s celebration of diversity and commitment to building high performing and cohesive teams.

Today, more than 17% of America’s Soldiers are of Hispanic or Latino descent, making this the fastest growing segment of the Army. Thousands of Hispanic American Soldiers fulfill vital roles supporting Army Reserve operations around the world, continuing a legacy of professionalism, selfless service and courage that will inspire generations to come.

Battalion Command Sergeant Major (CSM) Anthony Taylor as he discusses notable achievements of Hispanic Americans in the Army Reserve. He will also talk about his Peruvian heritage, his family’s proud history of service and his dedication to helping Soldiers reach their potential.

Beautiful, FOWPAL shares their wonderful talents with our events for Peace and Love