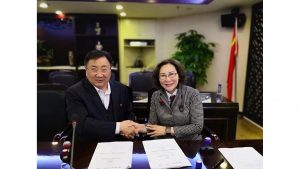 In the past 40 years, a Chinese revolution had been going on in the name of reform and opening up. The result is that a powerful China was born. Not only has China become the second largest world economic power, but China’s soft power is permeating every aspect of Chinese life and has been re-shaping China’s corporations and their cultures. In the 80s and 90s, while China was faltering in its direction forward and growing in all areas through trial and error in the daunting face of Western cultures, technology advancements and management efficiency, today’s China, in its newly found confidence, methodology, wealth, and in its lessons learned, is firm on its principles and directions. Ding Yifeng, a grassroots multi-billion dollar asset management firm is such a company. Instead of being a spinoff of a foreign financial firm that had flocked into China in the past decade, equipped with Western sophisticated financial tools, mathematic modeling and certain glamour, Ding Yifeng is 100% home grown. The tools they use mostly are Chinese wisdoms embodied in the Classics such as Book of Virtues 道德经 (bc. 571)and Book of Changes 易经 (over 5000 years old) and the desires not to yield to personal weaknesses and give in to fear and greed, but persevere through will power and patience instilled in them by the oriental wisdom.
“If you rush, you lose investors’ money. No one has the right to do so,” said Ms Ma Xiaoqiu, President and Co-Founder of Ding Yifeng-the three Chinese characters Ding Yifeng 鼎益丰 stand for prosperity, affluence, and harvest. To Ding Yifeng people, stock market is like a game of confidence and mass psychology play a key role. “Even rocket scientists are causing an avalanche and Occupy Wall Street is a social media phenomenal, let alone us. We are small potatoes and we cannot afford to lose,” said one of the drivers to the author. Mind you, the driver was worth 70 million rmb (10 mil USD) today after investing in the company’s cautiously selected two Hong Kong listed companies.
Ding Yifeng owns four Hong Kong listed companies, one of them-HKStock Code 00612- had the world record performance of 1230% return in 2018 and was recommended by four major world leading index, including MSCI China Index, Hengsheng, Hong Kong and Shenzhen. Four years ago, Ding Yifeng started to buy 612 stocks on the secondary market when the latter were traded 40 cents per share. In two years’ time, it turned from trash to cash. And the stock price soared to 28 HK dollars per share in late November, 2018.
It just didn’t happen overnight. It was planned to win.

Registered on Jan. 1, 2011, with eight staff members, Ding Yifeng took a tiny hotel room in Pengnian Square, Shenzhen Luohu district, that has a view of Hong Kong skyline. First day in the office, President Ma said that one day they would make it to Hong Kong. All eight of them believed it. Maybe, that is what we would call the power of dream? Or power of a story Ms. Ma once read and learned by heart when she was 11 years old. That story was A Foolish Old Man Who Moved the Mountains 愚公移山. Like all the Chinese kids born in the early 1960s, Ms. Ma lost three and half years of elementary education. The schools boarded up for “making the revolution” of accusing one another for being a counter revolutionary. At the age of 11, the revolution was over and it was time to go to school. Ms. Ma, now 11, could not read nor write. What would it matter anyway to place her at 3rd Grade or 4th Grade? Give her an extra year to catch up. The teacher placed Ma at Grade 3.
“The reason I was not kicked out was because I could recite the three Old Articles by Chairman Mao Zedong. I learned them by heart and recited them to my neighbors on the streets: Serve the People 为人民服务; A Foolish Old Man Who Moved the Mountains愚公移山; and Norman Bethune纪念白求恩. These are all very difficult things to do and these heroes did it—to push the comrade out while oneself was buried alive in the coal mine; to move the mountains; and to die for not one’s own country! True, I missed the basic training of how to spell and write, but I learned to always put others in front. That is a valuable lesson, with which we built a billion dollar company.”
That was true. With her partner, Chairman Sui Guangyi and Ding Yifeng people, in under 8 years, they built Ding Yifeng, an asset management firm with 80 billion RMB under management and the investments were strategically made in six major industries, namely, culture, high tech, investment banking, gold, health and tourism.

The story of Ma Xiaoqiu is not only the story of a contemporary Chinese woman CEO, but also the collective carrying capacity of Chinese women entrepreneurs who nurture and succeed. The Ding Yifeng Group, headed by Ma at the helm, is a model in execution. Her recent speech at UN not only reflects the unique Chinese value systems, but a strong personal statement that one’s fate is connected with the fate of the country. Her speech “Chasing the Sun in My Heart” tells a story from a personal dream to a national dream, from a new angle by adding the company data.
It was impressive.
The book is divided into seven parts with a full text of 250 pages + supplementary readings + 35 photos of the milestone years. It tries to tell a true story from a Chinese perspective and from a Western perspective. When faced with the task of learning from others and also from own culture, each of us is faced with the task of listening to the symphony of life with an open heart and an open mind.