You are here: Home / Arts & Leisure / Authors / Christians in a Cancel Culture Speaking with Truth and Grace in a Hostile World By Joe Dallas 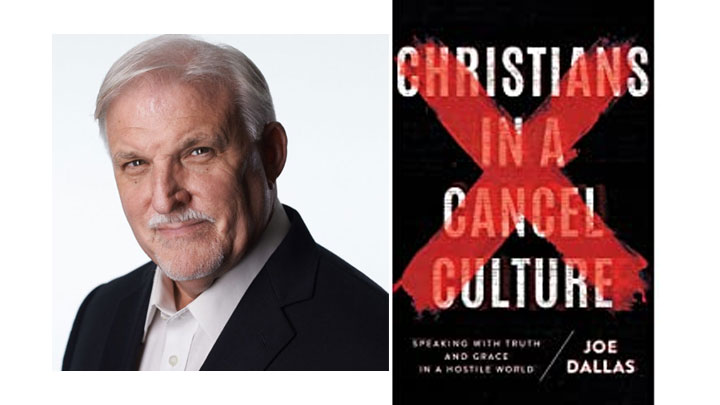 Listen to “Christians in a Cancel Culture Speaking with Truth and Grace in a Hostile World By Joe Dallas” on Spreaker.
Having the Hard Conversation: Joe Dallas Coaches Believers on How They Can Tell the Truth to a World That’s Been Lied to
“The culture is embracing a new world vision, but we haven’t. So we’re charged with refusal to bend, and now, shocked and numbed by our recent arrest, we’re prepping for the trial. Are we ready?”
—Joe Dallas

www.joedallas.com
Eugene, Oregon (August 3, 2021) —In this internet-fueled era of fading morality, herd hostility, and swift retribution for every misstep, Christians share a common concern: When it comes to sensitive topics like abortion, homosexuality, and transgenderism, how can they defend a worldview that is seen as not only uncool, but unacceptable? This worry rears its head again and again, both in the public sphere, where Bible-believing individuals risk losing credibility, reputation, and even employment for refusing to deny God’s truth, and in the personal sphere, where Christians fear alienating loved ones who hold opposing views.
Author and counselor Joe Dallas knows how difficult it can be to stand up for what’s true when it’s easier and safer to keep quiet. But Joe has also been on the other side of the conversation, and his own life is a testament to how powerfully God’s Word can speak to a misguided soul seeking spiritual peace. A former member of the LGBTQ+ community, Joe spent years wrestling to reconcile the Christian faith with his same-sex attractions, only to have his desires redeemed when he finally embraced the Bible’s teachings as the God-given authority over his life.
His renouncement of his old identity and subsequent advocacy for a biblical view of sexuality is often met with anger and contempt: “Early on, I realized I wouldn’t be allowed to just minister to people who wanted to reject sexual sin,” Joe says. “I’d also have to articulate a defense for their decision, and mine as well, both as a counselor to them and an advocate for their choice.” Because he’s spent decades under scrutiny for his views, he understands how important it is that Christians be prepared to answer for their beliefs—not only to advocate for God’s truth in an antagonistic world, but to use that truth to minister to those who haven’t yet found it.
Joe’s new book Christians in a Cancel Culture addresses head-on how today’s believers can understand and defend the aspects of their faith that have now been deemed hateful and harmful. “This book was written in hopes of answering the ‘How do we stand?’ question when we as Christians are charged with homophobia, sexism, racism, transphobia, and judgmentalism,” Joe explains. “At some point, you’re likely to be accused of one or all of the above, and you’ll need to give an answer.” Joe tackles the pressing conversations around abortion, homosexuality, transgenderism, critical race theory, and progressive Christianity, taking a compassionate look at the arguments often made in support of them and then refuting these views with biblical truth.
Christians in a Cancel Culture also walks readers step by step through the difficult discussions they are likely to have with friends, family members, and colleagues who see Christian doctrines in a threatening light. Joe reveals how these conversations can be used by Christians as opportunities to show empathy, encouraging them to hear the other person’s beliefs, wounds, and struggles and, in return, demonstrating to them Christ’s profound love and mercy.
As he prepares for the publication of his book, Joe is also launching a weekly companion podcast of the same name with the goal of continuing to equip Christians to speak wisely on these difficult topics. His first episode will premier Friday, July 23. On the podcast, Joe will interview well-known apologists like Becket Cooke, Sean McDowell, and Alex McFarland, as well as other ministry leaders who will lend their expertise on the weekly subject matter. This relevant podcast will be a tremendous resource for Christians looking to stay attuned to the controversies of the world while learning what the Bible has to say about them.
Whether someone lacks the courage to speak up for what’s true, or whether they’re searching for compassion to balance their boldness, Joe encourages every Bible-believing Christian to know that these are conversations they can—and should—have with confidence and grace. Now more than ever, this confused world needs to hear the Bible’s truth. “However dark and confusing the times may be, I’m more convinced than ever that the Word of God is still the answer,” Joe says, “and that it remains exactly what it’s always claimed to be.”
###
About Joe Dallas:
Joe Dallas is an author, speaker, and counselor who speaks nationwide. The founder of Genesis Biblical Solutions in Tustin, California, he has written nine books on human sexuality from a Christian perspective, including the bestselling Desires in Conflict and The Gay Gospel? His articles have been featured in Christianity Today and the Journal of Psychology and Christianity.
About Harvest House Publishers:
Harvest House, a Christian publishing company based in Eugene, Oregon, publishes more than 100 books per year and carries a strong backlist offering more than 1,200 titles. Over 140 million Harvest House books have been sold worldwide through diverse distribution channels, and additional millions have sold in over 75 different languages.

About the Author
Joe Dallas is an author, conference speaker, and ordained pastoral counselor. He directs a Biblical counseling ministry for those dealing with sexual and relational problems, and for their families as well. He received his master’s degree in Christian counseling from Vision University, San Diego, CA and is a member of the American Association of Christian Counselors. He is also the author of the daily blog Joe Dallas Online.
Joe has authored nine books on human sexuality from the Christian perspective, including Desires in Conflict (Harvest House, 1991), The Game Plan (Thomas Nelson, 2005), When Homosexuality Hits Home (Harvest House, 2004), Five Steps to Breaking Free from Porn (Harvest House, 2013), and Speaking of Homosexuality (Baker, 2016).
He is a contributing writer for The Christian Research Journal, and his articles have appeared in Christianity Today (cover story June 1993), The Journal of Christian Healing, and The Southern California Christian Times. His work has also been featured in The Los Angeles Times, Moody Monthly, New Man Magazine, and The Boston Globe. For over three years Joe taught and conducted the nationally recognized Every Man’s Battle five-day conference as the originating program director, and from 1991 to 1993, he served as the president of Exodus International. He was a regularly featured speaker with the Focus on the Family Love Won Out conference.
Dallas has represented the Christian viewpoint through a number of media appearances, including Focus on the Family Daily Broadcast, Family News in Focus, the ABC Evening News, The Joan Rivers Show, The Bible Answer Man, New Life Live, The 700 Club, Jay Sekalow Live and Concerned Women of America. He has spoken at conferences, churches, and universities across the country, including the Promise-Keepers Men’s Conference, The Moody Church of Chicago, The Christian Association for Professional Studies, Princeton Theological Seminary, and the Experience Conference. He has also lectured and debated in Norway, Denmark, Switzerland, Hong Kong, and Spain.
Joe and his wife Renee reside in Orange County, California, with their two sons.

About the Book
Title: Christians in a Cancel Culture
Subtitle: Speaking with Truth and Grace in a Hostile World
AUTHOR: Joe Dallas
ISNB-13: 978-0-7369-8354-9
RELEASE DATE: August 3, 2021
FORMAT: Trade Paper
MSRP: $15.99
LANGUAGE: English
The WHO, WHAT, and HOW of Responding to Those Who Want to Silence You
You’ve based your understanding of today’s sensitive social issues on the Bible’s truth. Mainstream culture not only sees these issues differently but calls you bigoted for rejecting views they’ve deemed self-evident. So how do you witness Christ’s love to those ready to write you off as hateful?

HELPING PETS AND THEIR PARENTS TRANSITION AS THE NATION REOPENS
Next Post: This song sequence from the film Original Mughal-E-Azam (1960)