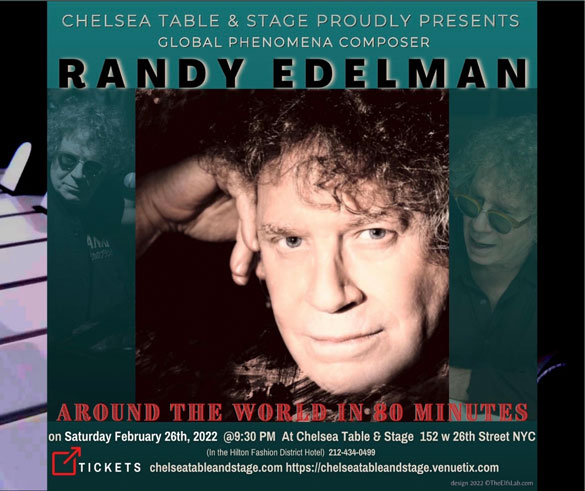 Tribeca Records and CEO John “SohoJohnny” Pasquale along with The Sandbar Rooftop and composer Randy Edelman warmly invite you to celebrate the single release of “How Could I Let You Go” by Randy Edelman Ft. Chioma. The celebration will take place at the “Sandbar Rooftop” located at 152 West 26th Street at 11:00 PM immediately following Randy Edelman’s “back by popular demand” “Around The World in 80 Minutes” concert. The concert will take place at the “Chelsea Table and Stage“ located at the same address on Saturday February 26, 2022 beginning at 9:30 PM.

SohoJohnny, CEO of Tribeca Records is a philanthropist, producer, actor, and entrepreneur based out of New York City, He is responsible for the production of huge celebrity benefits in the name of the Let Me Help, Inc foundation created by him in honor of his mother who passed from Covid. SJ has presented charity extravaganzas with icons including Sharon and Ozzy Osbourne, Sir Patrick Stewart, Jeff Goldblum, Julian Lennon, Stephen Perkins, Scott Page, Jane Lynch, Rick Wakeman, John Lodge, Rick Wakeman, John Lodge, Tony Moore, Kim Sledge, Leon, and many others. Randy Edelman is one of his most cherished artists on his Tribeca Record label.

Experience a beach escape for all seasons in the heart of the Fashion District at Sandbar Rooftop. Located on the 23rd floor of the Hilton, Sandbar’s Hamptons beach décor features whimsical touches such as lifeguard chairs, hanging lounges, and swings created from reclaimed wine barrels. The signature handcrafted cocktail list is designed by Sandbar’s house mixologist. Enjoy curated music, sophisticated menu items including pinsa-style pizza, and nearly 360-degree views of Manhattan and the Empire State Building. A relaxing visit to Sandbar Rooftop is an unforgettable New York experience at any time of the year.