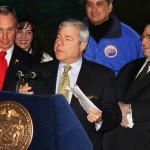 Mayor Michael R. Bloomberg and Central Amusement International (CAI) today unveiled plans for a new amusement park on three City-owned parcels in Coney Island that will open by Memorial Day 2010. CAI will lease the parcels, totaling 6.2-acres, for ten-years and invest nearly $30 million to build and operate the amusement park. The park will feature both traditional and cutting edge, state-of-the-art rides from renowned ride designer and manufacturer, Zamperla. The new amusement park will be built in two stages: This summer, CAI will open “Luna Park at Coney Island,” which will feature 19 rides, including one – Air Race – that will make its worldwide debut at Coney Island; and by summer 2011, the “Scream Zone at Coney Island” will provide additional attractions, including two custom roller coasters, a human slingshot ride, and go-karts. In total, 23 new rides will be installed, designed to celebrate Coney Island ’s unique history and character while adding modern amusements. In its inaugural season, Luna Park is projected to create 247 new jobs in Coney Island , increasing to 330 full and part-time positions in 2011, with an emphasis on local hiring. The Mayor was joined at the announcement, held at the New York Aquarium, by Council Member Domenic M. Recchia, Jr., Brooklyn Borough President Marty Markowitz, Congressman Jerrold Nadler, New York City Economic Development Corporation President Seth W. Pinsky, Department of City Planning Commissioner Amanda M. Burden, and Central Amusement International Vice President Peter Pelle.

“ Coney Island remains one of the most known and beloved neighborhoods around the world, but for decades its famed amusement park has dwindled to just a tiny fraction of what it once was. This summer, we’re reversing that trend,” said Mayor Bloomberg. “As part of our Administration’s revitalization plan for Coney Island – passed by the City Council last year – we’re making necessary infrastructure investments and joining with Central Amusement International to build new amusements that celebrate Coney Island ’s historic past while featuring modern rides – some making their worldwide debut – that will attract people from around the City and around the globe.”

The expanded amusement park is part of the City’s Coney Island Revitalization Plan, which will preserve and grow the historic amusement area; create a vibrant mixed-use neighborhood with new retail options and nearly 5,000 new units of housing, including 900 income-targeted units; and generate more than 25,000 construction jobs and 6,000 permanent jobs. In total, the plan is expected to generate more than $14 billion in economic activity for New York City over 30 years. In November 2009, the City released a Request for Proposals for a private sector amusement and entertainment operator for the three sites that it purchased earlier that month from Thor Equities. The proposal submitted by CAI was selected based on criteria that included: the strength of its amusement and entertainment programming; a clear understanding of the redevelopment objectives put forth in the Coney Island Comprehensive Plan; the economic impact of the proposal; the development’s financial feasibility; the team’s qualifications and safety record; and an innovative approach to site design and planning respecting Coney Isl a nd’s history and culture.

As part of planned infrastructure improvements, the City will invest $6.6 million in site preparation and basic infrastructure to support the ongoing redevelopment of the neighborhood. In addition, CAI will invest about $30 million: $3 million for additional site preparation, more than $15 million to open Luna Park and more than $12 million to open the Scream Zone. The new amusement park will be operational by Memorial Day and remain open daily until Labor Day and weekends through Columbus Day for its inaugural season.

“I am thrilled that Central Amusement International has been selected as the amusement operator for Coney Island ,” said Council Member Recchia. “They have a proven track record of exciting, diverse rides for young children and families that will fit right in to the Coney Island aesthetic. I am looking forward to working with them to ensure that we have rides and amusements in place for this summer, and that we continue to make good on our promise of bringing Coney Island into the future while honoring the history that makes it an iconic, worldwide tourist destination. And I encourage them to remember, when they start hiring, that we have an eager, dedicated workforce right here in Coney Island .”

“I am delighted to welcome Central Amusements to America ’s playground. This summer, Luna Park will shine during the day and sparkle under the stars at night,” said Borough President Markowitz. “As they say in Italy , where the roots of Central Amusements were formed, ‘Benvenuti alla Republica di Brooklyn!’”

“I welcome the arrival of Central Amusement International and Zamperla to Coney Island , and I’m very pleased that they will be open for business this summer,” said Congressman Nadler. “This 10-year agreement will be the foundation upon which we can plan the future redevelopment of Coney Island for the benefit of both residents and visitors, and it is truly a major step in the revitalization of the long-suffering amusement district. New public and private investment in the neighborhood will finally reverse the decline of the amusement district and, critically, create new jobs and economic development locally. I congratulate the City on this positive move forward.”

“I am happy that after all these years of negotiation and speculation we are finally delivering what I hope is a new day for the residents of Coney Island ,” said State Senator Diane J. Savino. “I want to thank the Mayor’s office and the staff of the New York City Economic Development Corporation, but most of all want to thank the residents of Coney Island for their patients and their desire to move the community forward.”

“I’m thrilled to welcome Central Amusement International to Coney Island ,” said Assembly Member Alec Brook-Krasny. “It’s great news for Coney Island and the entire City. In today’s economy, the prospect of 330 new jobs for the members of our community is significant news and much needed.”

“Today’s announcement represents a significant step forward in the transformation of Coney Island – offering a substantial down payment on the promise of the Administration’s plans for the redevelopment of this important Brooklyn neighborhood,” said New York City Economic Development Corporation President Pinsky. “By early this summer, we expect Central Amusements to invest millions of dollars on a vastly-improved and substantially-expanded amusement area, reversing years of decline and disinvestment, while simultaneously creating hundreds of jobs and drawing many, many thousands of visitors to the area. It took a team effort to get to this point and I look forward to celebrating the opening of Luna Park this summer.”

“Today is a major milestone for Coney Island . Not long ago, we were celebrating the adoption of a comprehensive rezoning as a first step towards the restoration of Coney Island ‘s title as the world’s greatest open and accessible urban amusement park,” said City Planning Commissioner Burden. “We are following through with this commitment with the announcement that the new Luna Park will open this summer. This park is the first step towards a permanent year round 27-acre amusement and entertainment district.”

“Central Amusement International is excited to be chosen by New York City to be a part of the revitalization of Coney Island ,” said CAI Vice President Peter Pelle. “ Coney Island has long been known as a place of innovative thrills and attractions. Our dedicated team will work with the City to revitalize this iconic New York destination to make it a must-see attraction for locals and visitors coming to New York from around the world. We are bringing back the fun to Coney Island this May and for many years to come.”

Luna Park at Coney Island will reestablish the area as an amusement park destination offering 19 new mechanical rides from Antonio Zamperla S.p.A., games, food and beverage concessions, and live entertainment. Four new prototype rides will have their debut in 2010 including Air Race, where riders will soar and barrel roll around a control tower; and the Speedy Coaster, a gravity coaster designed especially for families.In addition, the iconic Astrotower will be repurposed and utilized as signage to draw visitors to the area. By summer 2011, the Scream Zone will expand the park’s entertainment offerings by introducing four additional thrill rides, including the debut of two new roller coasters.

Renderings can be viewed at nyc.gov.

Luna Park and the Scream Zone will more than double the acreage currently utilized for amusements in Coney Island, with Luna Park encompassing 3.16-acres on the former Astroland site and the Scream Zone covering an additional 3-acres between West 12th and West 15th Streets. Pursuant to its lease, CAI will pay a base rent to the City of $100,000 per year for each year of its term; the City will also receive additional revenue derived from gross receipts from the amusement park. It is a nticip a ted th a t existing a musements on other City-owned sites in Coney Island, including the Cyclone a nd Deno’s Wonder Wheel Park , will continue to be oper a ted by their current management for the duration of their leases. Upon expiration of the 10-year interim lease and the completion of necessary infrastructure, the City expects to issue another Request for Proposals to identify a permanent amusement park developer for a lease term of 25 years.

Coney Island Craft Lagers, made by Shmaltz Brewing Company, will celebrate the opening of the new Luna Park with its own brand new summer attraction: Coney Island Luna Lager.

In total, the City will invest over $150 million, together with millions more from the State and federal governments, to improve Coney Island’s infrastructure, including upgrading the underground infrastructure throughout the neighborhood and rebuilding large sections of the Boardwalk. The City is currently in design for a new Steeplechase Plaza to serve as the western entryway to the revitalized amusement and entertainment district, with construction expected to commence by fall 2010. The City also expects to break ground on Coney Island Commons , a new residential and community development with more than 180-units of affordable housing and a new, state-of-the-art, 40,000-square-foot YMCA in fall 2010. More than 5,000 new units of new housing will be built in Coney Island in the coming years with more than 900 affordable to low-and-moderate-income families.

Previous Post: « Patrick Hohman and The Condos, Townhouses and Home Owner Associations
Next Post: The Art of Love »