You are here: Home / All We Need Is Love / Good Samaritans / Congregation Habonim: Message from Rabbi Gelber 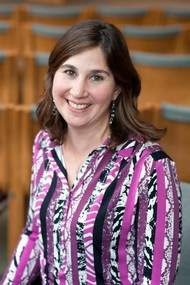 When the young boy was asked by his father to say the prayer over the bread, he realized he didn’t have his head covered…so he asked his little brother to rest a hand on his head until prayers were over. The little brother grew impatient after a few minutes and removed his hand. The father said, This is important…put your hand back on his head! The little boy exclaimed, What am I???? My brother’s kippah?

Today, on my father’s 6th yahrzeit (anniversary of his death), I imagine him telling this joke at shabbos
kiddush, cracking himself up, and getting those around him to smile as well. Haha. Am I my brother’s kippa! Those of you who knew Jules (my father) know it’s true. My father was a shul mensch, a regular in the pews. He appreciated the hazzanut with which we grew up and careful and intentional davenning. He paid close attention to the rabbi’s sermons and enjoyed a good shul joke. He loved to laugh and he laughed the most when something smart emerged from the moment.

Memories of my father rose like heat from the summer pavement in the days leading up to his yahrzeit. Expected yet unexpected. Highlighting his presence and power in my life. Earlier this week, I finally crossed a local adventure off my rather short bucket list with a visit to The Little Red Lighthouse in Fort Washington Park. As a child, I would listen to The Little Red Lighthouse and the Great Gray Bridge, by Hildegarde Swift and Lynd Ward, on cassette tape with my father. Whenever we’d visit my grandparents just over the GWB in Fort Lee, NJ, I’d peer out the window trying to spot the lighthouse. She stood like a family friend offering greetings and pointing the way on our journey. In the book, the lighthouse feels dwarfed, unimportant and unnecessary next to the expansive bridge and its bright light. When a great fog rolls in and the light-keeper fails to come and fire up its light, the lighthouse learns the ships of the river are in great danger. The Bridge calls, “Little brother, where is your light? The Lighthouse wonders ‘Am I brother of yours bridge? Your light was so bright that I thought mine was needed no more.’ The great Bridge calls down, asks it to turn on its light, and explains that the bridge’s beacon is for the ships of the air, not those on the water. Great gray bridge, put your hand on that lighthouse’s keppy and remind it of its worth. Fire up its light so it shines where it is needed most.

This week’s parasha, Pinhas (or Pinchis, as my father would say) introduces the daughters of Zelophehad who come to challenge the laws of inheritance that favor sons, making daughters insignificant. Their reasoned request to claim land in their father’s name goes through Moses to the HolyOne. The Torah teaches, Kayn b’not Zelophehad dovrot naton titayn lahem ahuzat nahalah b’toch achay avihem v’ha’avarta et nachalat avihen lahen/The daughters of Zelophehad speak right. You should give them a hereditary holding among their father’s kinsmen and transfer their father’s share to them (Numbers 27:7). Rashi (11thc) emphasizes we are to understand the word Kayn as right or proper. God said: Exactly so is this chapter written before me on High (The Law has long since been fixed) (Sifrei Bamidbar 134:1). This tells us that their eye saw what Moses’ eye did not see. (They had a finer perception of what was just in the law of inheritance than Moses had.) (cf.Midrash Tanchuma, Pinchas 8). These sisters stepped out of the shadow of fear (tzel pachad) to challenge the status quo. Their lens on the turning kaleidoscope of life exposed wisdom, shape and color that would have been ignored and unseen. Standing together, they held the kippah over Moshe’s head, inviting Gd to affirm holiness in all.

My daughter, the youngest of my father’s 5 grandchildren, carries the name of one of the daughters of Zelophehad, Noa. On Friday night, I bless her in the name of this biblical warrior who stepped into the light with neither fear nor anger, only strength, sanctity of family and a call for justice. My daughter blesses herself on Friday night with her everyday name, Zahara, letting her radiant sparkling light shine. She blesses me too. In those sacred shabbos moments, she reminds me we are each other’s kippah, the one that turns us towards one another to affirm the holy moments, stand by one another and be seen in all our refracted light.

I’m delighted that Jessica Futran joined our senior staff this week as Cantor Halev transitions to emeritus status. We are all each other’s kippah, working to raise up community in love. May we all live as my father did, with light, laughter, integrity, intensity and always as ourselves.
​​​​​​​
Shabbat Shalom
rg

Delivered to renee.edelman@edelman.com
Forward This Message
Can’t see any pictures?