You are here: Home / Good News To Go / The Copacabana 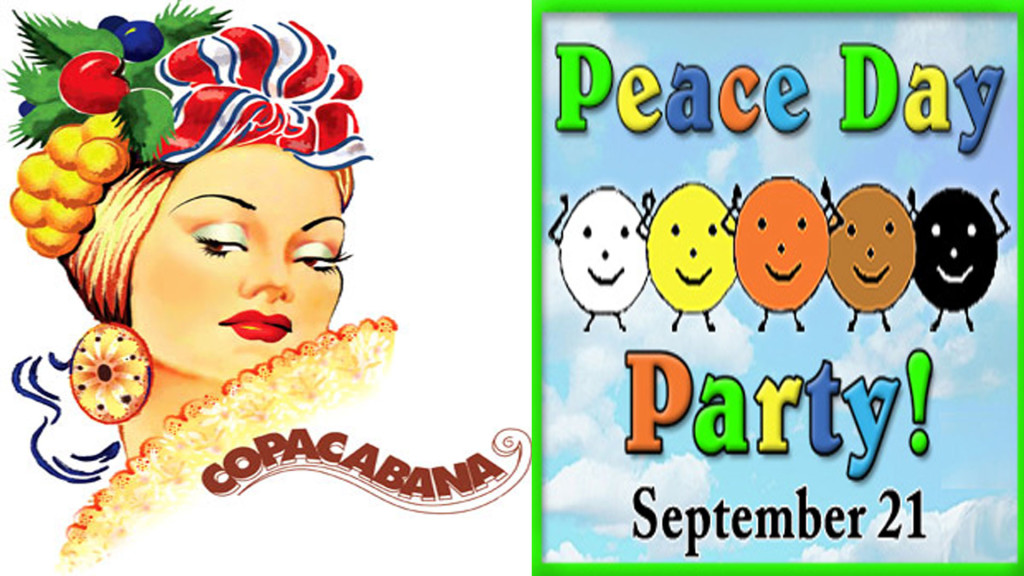 CopaCabana joins the Peace Day Party and they will host our Peace Day Party After Party as they support World Peace.  We speak to John Juliano who helped create the Copa and has been a good friend for many  years.  We will start to have every Tuesday for our www.goodnewsplanet.com and www.peacedayparty.org members a Copa Good News Party, starting September 23.

The Copacabana (often referred to as The Copa) is a famous New York City nightclub. Many entertainers, among them Danny Thomas, Pat Cooper and the comedy team of Martin and Lewis, made their New York debuts at the Copacabana. The 1978 Barry Manilow song “Copacabana” is named after, and is about the nightclub. Part of the 2003 Yerba Buena song “Guajira” is set there. The Copa was used as a setting in the films Goodfellas, Raging Bull, Tootsie,The Purple Rose of Cairo, Carlito’s Way, The French Connection, Martin and Lewis, and Beyond the Sea, as well as several plays, including Barry Manilow‘s Copacabana. In addition the musical Copacabana, starring Groucho Marx and Carmen Miranda, takes place in the nightclub.

The club opened November 10, 1940[2][3] at 10 East 60th Street in New York City. Although Monte Proser’s name was on the lease, he had a powerful partner: mob boss Frank Costello. Proser (1904-1973), a native Englishman, was a well-connected nightclub owner and press agent whose various clients included Walt Disney, Mary Pickford, and the Ziegfeld Follies.[4] Costello put Jules Podell on the scene to look after his interests; Podell had a police record and would not have been an acceptable front man for the business, and indeed, the club faced tax problems and a racketeering investigation in 1944. However, by 1948, such pressure had lessened; Proser was out, and Podell was the official owner.[5]

The Copacabana had Brazilian decor and Latin-themed orchestras, though the menu featured Chinese food. The club was also known for its chorus line, “The Copacabana Girls”, who had pink hair and elaborate sequined costumes, mink panties and brassieres, and fruited turbans.[citation needed]

Podell originally had a strict “no blacks” policy. In 1944 Harry Belafonte, then a member of the U.S. Navy, was denied entry with a date. Eventually Podell was persuaded to change his policy, and Belafonte returned in the 1950s as a headliner at the club. Sammy Davis Jr. shattered attendance records with his run in May 1964, and Sam Cooke performed there on July 8, 1964, resulting in the LP Sam Cooke at the Copa. In July 1965 the Supremes made their debut there, resulting in Motown Records‘ booking the Temptations, Martha and the Vandellas, and Marvin Gaye to perform at the Copa in the next few years. The Supremes also recorded a live album there in 1965 that just missed the Top 10, peaking at #11. Marvin Gaye also recorded a live album, as did The Temptations. The Supremes, who proved to be the most successful of all the Motown acts, released The Supremes: Live at the Copa Expanded Edition in 2012, featuring the much sought-after original repertoire.

Dean Martin and Jerry Lewis were frequent performers at the club and did their last performance there as well, on July 25, 1956, which is seen in the TV movie Martin and Lewis (2002).

This nightclub achieved a degree of notoriety due to a May 16, 1957 incident involving members of the New York Yankees. On that evening, teammates Mickey Mantle, Whitey Ford, Hank Bauer, Yogi Berra, Johnny Kucks, and Billy Martin, along with the wives of all but Martin, arrived at the nightclub to celebrate Martin’s birthday. Sammy Davis, Jr. happened to be the headliner. During the performance, a group of bowlers, apparently intoxicated, started to interfere with Davis’ act, even hurling racial slurs at him. This behavior incensed the Yankees, especially Martin, since his roommate was Elston Howard, the first African American to join the Yankees. Tensions erupted between the two factions, and the resulting fracas made newspaper headlines. Several of the Yankees were fined. One of the bowlers sued or pressed charges against Bauer for aggravated assault, but Bauer was found not liable or not guilty. Martin was later traded from the Yankees to the Kansas City Athletics, with this incident cited as a main cause.

In the mid-1970s, the Copa became a discothèque. It was closed for three years[6] in 1973 after Jules Podell died.

In 1992, then-owner Peter Dorn moved the club from its original location of over 50 years to 617 West 57th Street. Dorn charged landlord Nicola Biase with “not liking Hispanics”, the stated reason for the move.[7]

In 2001, the club was forced to move a third time to W. 34th Street and Eleventh Avenue on the west side of Manhattan, when its landlord terminated its lease early to build office towers on the site. Since then it has presented mostly hip-hop and salsaacts.[6]

On January 20, 2007, the club announced that it would have to move by July 1 because its current location was condemned due to construction of the extension of the IRT Flushing Line (7 <7> trains) of the New York City Subway, as well as the construction of the now-cancelled World Product Center.[8] June 30 of the same year was the last night the club was open, with El Gran Combo performing there.

From late 2007 until the club reopened in 2011, the club was sharing space with the Columbus 72 nightclub, which shares the same owners.

In April 2010, the club owners were approved for a liquor license to operate the club in a new location 760-766 8th Avenue, on the second and third floors.[9] In November 2010, the club owners were granted permission to alter the method of operation on the second floor to permit dancing by restaurant patrons as well as the general public, not limited to private parties and catered events.[10]

On July 12, 2011, the club re-opened to the public in Times Square at 268 West 47th Street. The first performer at the new location was world-renowned salsa musician Willie Colón.[11]