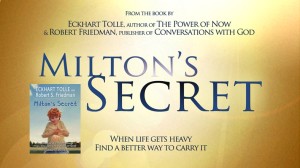 VANCOUVER, BC (September 24, 2013) – Hulo Films announced today a crowdfunding campaign launch via Indiegogo, to support MILTON’S SECRET, a live-action dramatic feature film based on the book by #1 New York Times bestselling author Eckhart Tolle (The Power of Now, A New Earth) and Robert S. Friedman (Publisher of Conversations with God), and starring Academy Award nominee and Golden Globe winner, Peter Fonda.
Starting September 24th, Tolle fans and supporters of his books will have an opportunity to co-create a feature film based on Tolle’s teachings by contributing to its production at www.SupportMiltonsSecret.com.
Vancouver Based Hulo Films decided to turn to Indiegogo’s crowdfunding platform to help build awareness of the project and offer fans the opportunity to get involved, while protecting the integrity of Tolle’s message.
MILTON’S SECRET is a coming of age story about an 11-year-old boy growing up in an economically depressed suburb, and the elder quest of his grandfather. His mother and father are workaholics with marital and financial problems, and he is being bullied at school. When his grandfather visits, Milton learns that rehashing the past and worrying about the future are preventing him from finding true happiness in the Now.
“People often ask me, ‘why aren’t there more movies for people like us, people who are interested in spirituality, healing, and personal development?’ ”, Said director Barnet Bain. “Prior to crowdfunding, it would have been difficult to make a movie like MILTON’S SECRET, in the way audiences interested in transformational entertainment expect to see it; without making compromises to shoehorn it into a more familiar worldview.”
Bain has made a career focused on creating transformational movies, including Oscar winner “What Dreams May Come,” Emmy nominated “Homeless to Harvard, ” and “The Celestine Prophecy.”
Hulo Films Producer, Stephen Huszar believes that crowdfunding is a game-changer for independent filmmakers like him catering to specialty audiences. “By connecting directly with people interested in transformational entertainment, we hope to show that making mainstream movies about spiritual ideas is an idea whose time has come.”
Contributors to the MILTON’S SECRET Indiegogo launch will be entitled to various incentives based on their level of donation, everything from a special edition copy of the finished film, an on-screen film credit, a walk-on speaking role to VIP Red Carpet Premiere tickets.
For more information or to contribute to the campaign please visit:. SupportMiltonsSecret.com

###
PLEASE NOTE:  ECKHART TOLLE IS NOT AVAILABLE FOR INTERVIEWS AT THIS TIME.
FACEBOOK:

Do you find yourself looking for powerful and more meaningful movies? Today is your chance to help one come to life! Please visit Milton’s Secret Indigogo campaign to find out how you can contribute in turning Eckhart Tolle and Robert Friedman’s book into a film with a its representation. http://bit.ly/186tO2c

Magic happens when people come together to support what they believe in. Milton’s Secret Indigogo campaign is looking for people passionate about mindfulness and about making this world more beautiful! From the book by Eckhart Tolle & Robert Friedman comes a family movie where people of all ages will walk away with coping skills for keeping mindfulness, compassion, and the power of presence alive! http://bit.ly/186tO2c

Help spread the awareness of the benefits of living in the now. Support the making of Milton’s Secret, a new dramatic feature film based on Eckhart Tolle’s and Robert Friedman’s book.  Directed by Barnet Bain, Milton’s Secret will be a first of its kind in Transformational Entertainment, focusing on mindfulness and compassion! http://bit.ly/186tO2c