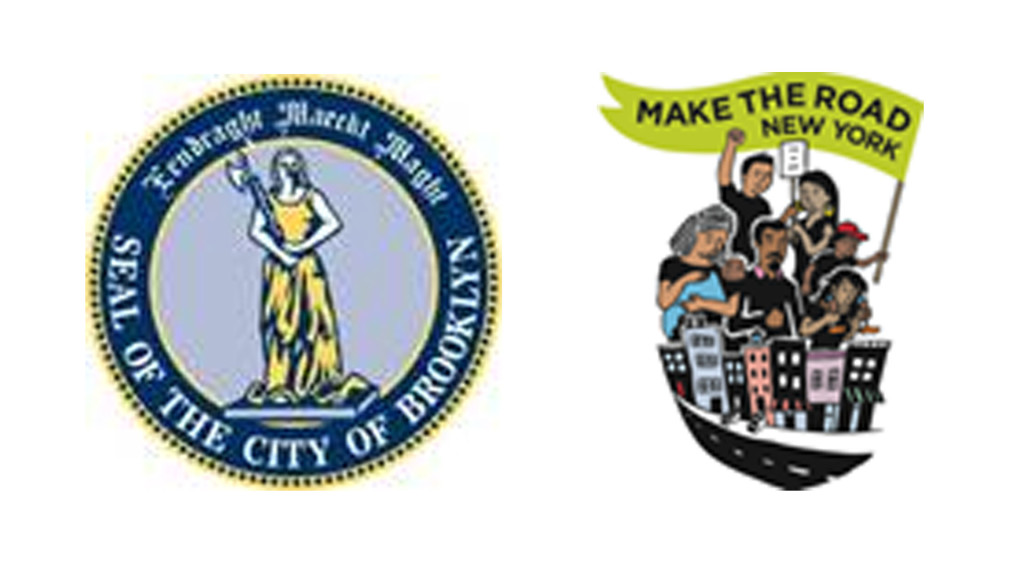 BROOKLYN, NY, April 14, 2016: Today, Brooklyn Borough President Eric L. Adams and Make the Road New York launched “Faces of DAPA & DACA+,” a photo exhibit at Brooklyn Borough Hall featuring portraits and stories of individuals and families directly impacted by Deferred Action for Parents of Americans and Lawful Permanent Residents (DAPA) and Deferred Action for Childhood Arrivals (DACA) Expansion, administrative relief programs enacted by President Barack Obama that are currently being reviewed by the United States Supreme Court. Days before oral arguments will be heard in United States v. Texas, a case concerning these executive actions, a display was unveiled that includes giant banners hanging over the historic steps of the building. Borough President Adams and representatives from Make the Road New York spoke about how the exhibition is meant to educate the public and highlight the importance of the Supreme Court ruling in favor of keeping immigrant families together.

“In Brooklyn, we are all immigrants of different generations,” said Borough President Adams. “Immigration defines Brooklyn, where nearly 40 percent of residents were born in another country and 47 percent of households speak a language other than English at home. I am proud to showcase this exhibit with Make the Road New York in Brooklyn Borough Hall — the People’s House — to reveal the true faces of immigrants who have come here to work, attend school, and pursue the American Dream.”

“We are all tired of the threat to millions of families hovering over children and parents because our federal legislature refuses to fix our broken immigration system,” said Deputy Brooklyn Borough President Diana Reyna. “Doing nothing is not an option. Comprehensive immigration reform will bring millions out of the shadows, helping families as well as the best and brightest doctors, engineers, entertainers and entrepreneurs stay in the United States. The symbol that represents our great nation is the Statue of Liberty — not an ICE [Immigration and Customs Enforcement] official or jacket. Engraved on Lady Liberty, a quote from Emma Lazarus echoes ‘Give me your tired, your poor, your huddled masses yearning to breathe free…” We are urging the Supreme Court to bring light and not darkness.”

“We would like to thank Borough President Adams for partnering with Make the Road New York on this exhibit,” said Javier H. Valdés, co-executive director of Make the Road New York. “What better way than to use the borough of Brooklyn to demonstrate the positive role that immigrants have had in our beloved borough. We hope the photo exhibit sparks a healthy conversation about the role of the immigrant community in this country and pushes back against the hateful rhetoric that many have used lately.”

“As a mother of a mixed-status family — three of my children are US citizens and one of my daughters benefited from President Obama’s 2012 DACA initiative — DAPA would give my family relief from the fear of being torn apart,” said Catalina Villalba, an undocumented Make the Road New York member featured in the exhibit. “Once DAPA goes into effect, I will have the opportunity to obtain a better job and ultimately a better future for my daughters and family. Until that day happens, I will continue to live in fear of being separated from my children.”

The “Faces of DAPA & DACA+” launch was also attended by Council Members Carlos Menchaca, chair of the Committee on Immigration, as well as Council Member Antonio Reynoso and a rep for Representative Nydia Velázquez. The display will run at Brooklyn Borough Hall through Saturday, May 14th and is part of a national effort that will culminate with a large exhibition in Washington, DC in June during Immigrant Heritage Month and before the Supreme Court’s decision announcement. Immigrant groups around the country will be participating in the “Faces of DAPA & DACA+” series, with events planned in Alabama, Arkansas, California, Connecticut, Illinois, Maryland, New York, Wisconsin, and Washington, DC. 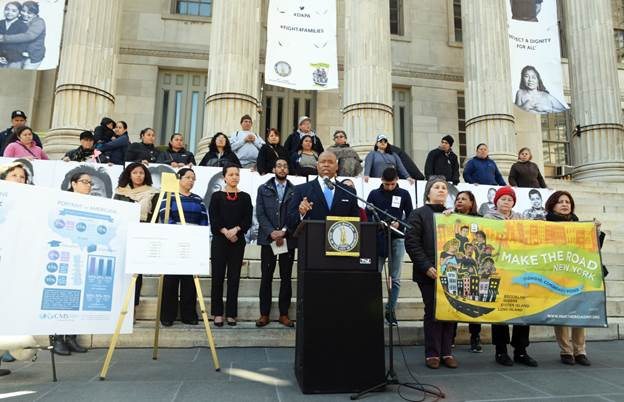 Brooklyn Borough President Eric L. Adams spoke outside Brooklyn Borough Hall at the launch of “Faces of DAPA & DACA+,” a photo exhibit staged in partnership with Make the Road New York that features portraits and stories of individuals and families directly impacted by Deferred Action for Parents of Americans and Lawful Permanent Residents (DAPA) and Deferred Action for Childhood Arrivals (DACA) Expansion. 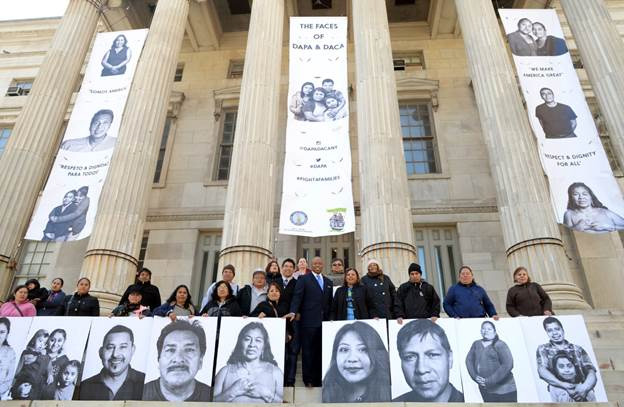