US Tour and Release of new CD
“Attitude Manouche”

After a fabulous concert at Carnegie Hall, May 1st, titled FOREVER DJANGO “Passing the Family Torch”, The Django Festival Allstars hit the road again with a cross-country tour starting at their US home, Birdland, where it all started led by SAMSON SCHMITT on Guitar It’s the Django Reinhardt Festival’s 19thyear and going strong. 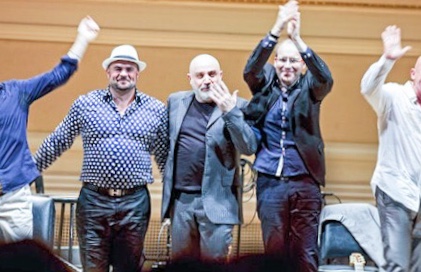 The audience at Carnegie Hall was blown away by sheer talent, warmth, and charm. There was pure joy in the great hall as Dorado Schmitt, gypsy legend, passed the torch to his sons Samson and Amati Critically acclaimed soloists LUDOVIC BEIER on Accordion & Accordina and PIERRE BLANCHARD on Violin also took center stage. Now Samson, Pierre, Ludovic along with DOUDOU CUILLERIER on rhythm guitar who also scats and ANTONIO LICUSATI on Bass, return from France to Birdland for the festival and to start their tour (info below).

Scott Yanov wrote of the band’s appearance recently at the Hollywood Bowl..”The highlight of the entire festival was provided by The Django Festival Allstars”.
Downbeat Magazine wrote of their appearance at the Newport Jazz Festival…”A Standout performance” of Samson Schmitt…”melodic genius, nothing short of sensational”..and of Ludovic Beier…”heart-wrenching playing on the accordina reminiscent of Toots Thielemans at his zenith..Pierre Blanchard on Violin ,a prodigy of Stephane Grappelli, brings fire as well to the violin.

SPECIAL GUESTS:
VERONICA SWIFT: JULY 10, 11, 12 is recognized as one of the young new Jazz vocal stars… daughter of Jazz Piano great Hod O’Brian and Vocalist Stephanie Nakasian. She performs all over the US and beyond at major clubs and festivals. Among many greats, she has performed with Michael Feinsein and is now touring with Chris Botti.
EDMAR CASTANEDA: July 13 & 14, with his unique Columbian Jazz Harp was introduced onto the scene by the amazing Paquito D’Rivera who he has performed with plus other greats John Scofield, Gonzaldo Rubalcaba, bassists Marcus Miller and John Patitucci, Ivan Lins, Sting and many more
ROMERO LUBAMBO: July 15 One of the top stars on the Jazz scene … virtuoso Guitarist originally from Brazil can play in any setting and has performed alongside Yo-Yo Ma, Kathleen Battle, Diana Krall, Herbie Mann, Wynton Marsalis, Gal Costa, Kurt Elling, Kenny Barron, Luciana Souza, Cyro Baptista, Sergio and Odair Assad, Ivan Lins, Grover Washington Jr., Vernon Reid, Flora Purim an Airto , Diane Reeves (too many to name).
The Django Reinhard NY Festival brings the music of the great gypsy guitarist Django Reinhardt into the 21stCentury. The high energy performances pay tribute to Reinhardt who is considered one of the greatest jazz guitarists of all time. Reinhardt’s driving, swinging style became known as ‘HOT JAZZ’. The artists add their own interpretations, arrangements and original compositions along with some of Reinhardt’s greats…to stunning virtuosity with runs that bedazzle the eye … melodies that will break your heart.