You are here: Home / All We Need Is Love / Good Samaritans / Donna Stein of NYC Friends of Clearwater and Eco-Logic radio and Ken Gale of Eco-Logic radio on WBAI 99.5 FM in NYC talking about water. 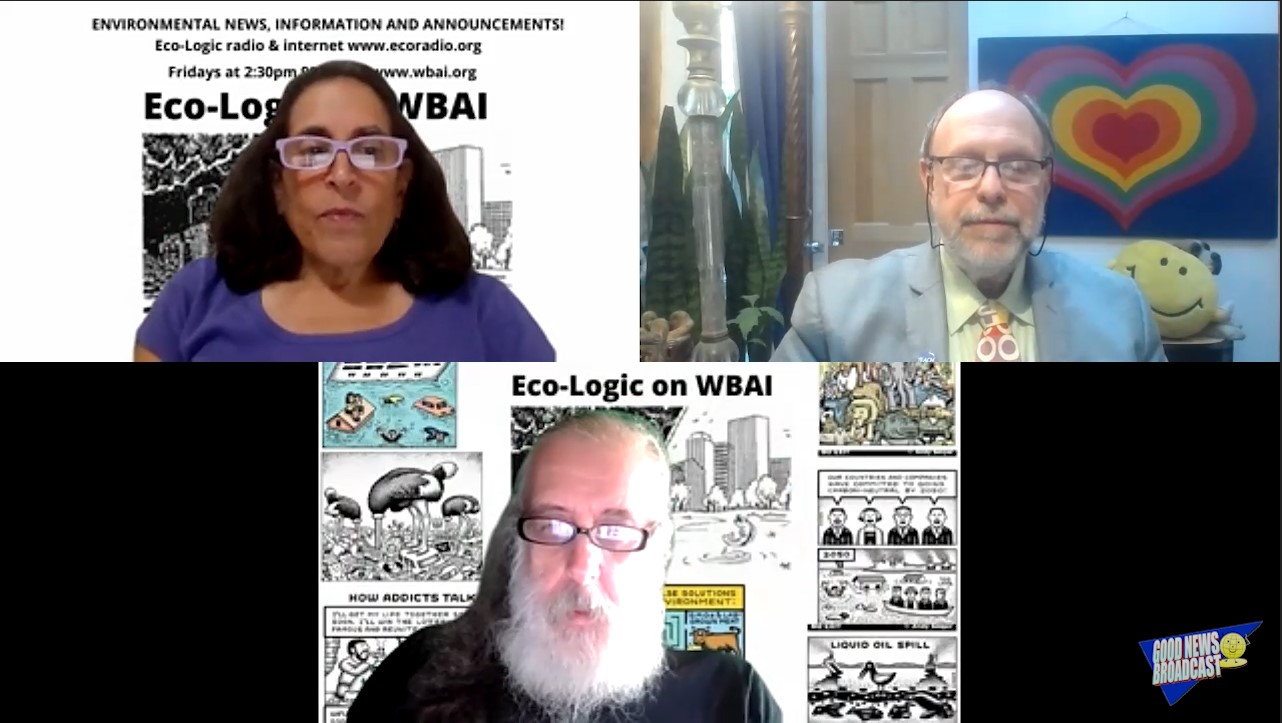 Donna Stein is part of
Hudson River Sloop Clearwater Board of Directors.

Donna Stein is the President of New York City Friends of Clearwater, as well as it’s Executive Producer of special events– and along with Ken Gale and Sally Gellert, she is the producer and co-host of Eco-Logic, an environmental program on listener-supported, non-corporate radio station WBAI-99.5 FM in New York City. www.ecoradio.org

Growing up, Donna didn’t even realize Yonkers was on the water, as the Hudson River was so polluted no one she knew went to that part of town. Donna is an avid kayaker on her beloved Hudson River and cares deeply for so many reasons to fight for a healthy planet. Her vision is to realize a safer, fairer and sustainable world.

Clearwater is the last tall ship on the Hudson and the only floating environmental classroom for towns up and down the river. We need this majestic symbol of environmentalism so we can continue to do the important work of environmental education, cleaning up the river and forward Pete’s legacy.
Please support Hudson River Sloop Clearwater!

Ken Gale is the creator and a producer and host of WBAI-FM’s environmental radio show Eco-Logic, heard most Fridays at 2:30PM. He has been an environmentalist for as long as he can remember, coming into it through his hobby of birding and is still an avid birder. He majored in oceanography in college and his life’s work almost was dinoflagellates. Because oceanography is equal parts biology, chemistry and physics, his college training enables him to communicate with scientists who are guests on Eco-Logic no matter what their discipline is. Knowing an Amish family since he was a kid contributed to making him a better conversationalist.
He joined listener-supported WBAI-FM just over 30 years ago as a hard rock d.j. in the middle of the night.
He’s been active in over a dozen grassroots environmental groups in the NYC area. He’s the author of Chernobyl-on-the-Hudson about the now closed Indian Point nuclear reactors and also wrote for math textbooks, those questions at the end of the chapter “Practice Your Skills.” He has also had quite a few comic book stories published by both mainstream and independent publishers.

Ken Gale is a freelance writer who has studied energy issues for over 30 years. In 1980 he started the newsletter New Rising Sun for the NYC SHAD (Sound and Hudson Against Atomic Development) Alliance. Due to his science and writing background, he found himself translating NRC and other government “literature” into English. When the famous accident at Chernobyl happened in 1986, he used that research to write “Chernobyl-on-the-Hudson”. He has also written for math textbooks (those questions at the end of each chapter, “Practice Your Skills”), newspapers and magazines such as The Amsterdam News and Downtown and for comic strips and comic books, both mainstream and alternative. His radio career started in the early ’80s for WHBI-FM. He joined Ed Menje on WBAI’s overnight hard rock music show “Monsters from the Id” in 1991 which was turned into ‘Nuff Said! in 1993, where he interviewed writers and artists in the comic book and comic strip fields. He currently is a host and producer for Eco-Logic, WBAI-FM’s environmental show. He has been active in environmental issues for as long as he can remember and can be reached at kengale@comicbookradioshow.com.

What Does Peace Mean to Kemp Harris ?
Next Post: Indiggo Twins at Peace Day Party 2019 in Times Square