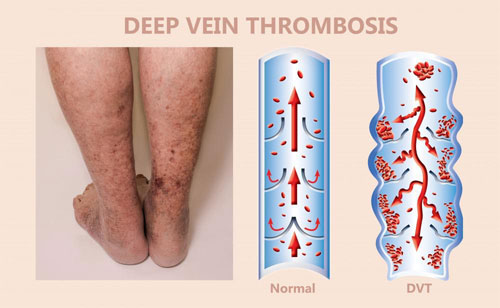 DVT Blood Clots: Know The Stats. Know Your Risk – Kicks Off in March During DVT Awareness! Month! Award-Winning Actress and Singer Lainie Kazan Travels Across the Country Urging Americans to Understand the Signs, Symptoms and Risk Factors for Deep-Vein Thrombosis (DVT) (Bridgewater, NJ, March 17, 2007) Entertainer and artist, Lainie Kazan, spent her entire life devoted to performing on the big screen, television and stages across the country, and now she is traveling to raise awareness about DVT blood clots, what she calls a silent killer.DVT affects up to two million people each year in the U.S. and its primary complication, pulmonary embolism (PE), claims up to 300,000 lives annually — more than breast cancer and AIDS combined.
Several years ago Lainie broke her foot and while recovering, developed deep-vein thrombosis (DVT) blood clots which broke off and traveled to one of her lungs. I have been given many gifts. One is my health says Lainie Kazan. Another is the ability to capture an audience’s attention, with song and the ability to make people laugh. This time, I’m using it to talk to people about my personal experience with DVT, a potentially fatal condition . a silent killer.To help educate the public about the signs, symptoms and risk factors for DVT, Kazan joins the DVT Blood Clots: Know The Stats. Know Your Risk. campaign. This year the educational program will travel to health/senior expos across the country beginning in March in support of DVT awareness month.Just like Lainie, most people don’t think they could develop DVT, so being aware of the signs and symptoms associated with DVT blood clots is crucial to help reduce the risk of developing one and its complications says Dr. Geno Merli, Professor of Medicine, Jefferson Medical College at Thomas Jefferson University, and Senior Vice President and Chief Medical Officer at Thomas Jefferson University Hospital. To learn more about DVT symptoms and assess their risk, people should speak to their healthcare professional.
More about DVT and Pulmonary Embolism (PE): Deep vein thrombosis (DVT) entails the formation of blood clots within deep veins of the body, most commonly occurring in the lower extremity. DVT occurs up in near 2 million individuals in the United States (US), each year. Pulmonary embolism, a serious complication of DVT, at times fatal, is responsible for the death of up to 300,000 people each year in the U.S. — more than breast cancer and AIDS combined. Yet, near three quarters of the American public is unaware of DVT and its complications, according to a national survey sponsored by the American Public Health Association.
The main problem underneath DVT involves a blockage of blood flow within the deep veins involved, owing to the formation of a blood clot within. Symptoms of acute leg pain and swelling may occur, as consequence of the blockade to blood flow. A PE occurs when part of the blood clot dislodges from its nest in the deep veins, and travels upstream by way of the blood flow, eventually reaching the lung, where it remains trapped. There ensues a blockade of the blood flow within the lungs. It interferes with the fresh oxygenation of blood within lungs, where naturally occurring within the body. There are many symptoms associated with PE, but the most common ones include shortness of breath, lateral chest pain worsened by deep breath in. The size and location of blood flow obstruction within the lungs determine in part the severity of the situation, in individual patients. Generally, severity goes up with the amount of blockade, and those who die from PE tend to have the largest of them all. There are well known risk factors to DVT, including prolonged immobility, major surgery, chronic medical ailments, cancer, age above 40 years, trauma, oral contraceptives, pregnancy and the post-partum.
The management of DVT includes prophylaxis, under certain risk conditions, and acute treatment in the patients in whom it occurred. The management of DVT involves several treatments including early mobilization, anti-embolism stockings or mechanical leg compression devices to enhance blood flow, and anticoagulants and/or blood-thinning drugs. It is important to consult your healthcare professional about the signs and symptoms associated with DVT.
For more information and a free risk assessment kit, visit http://www.dvt.net or call 1-866-MY-DVT-RISK