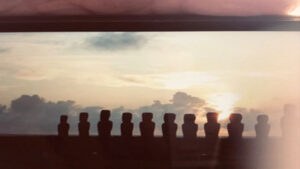 Approximately 2,332 miles from Santiago, Chile, a plane touched down one a remote
volcanic island inn Polynesia in the middle to the South Pacific known as Easter Island
(Rapa Nui). The first inhabitants date back to 700-800 A.D. Easter Island is noted for
its massive monumental statues called Moai (statutes representing the dead) situated
on an Ahu ( Platform).
All tours start at the Rapu Nui National Park (a UNESCO World Heritage Site). The
price for a tour ticket is US$80. Our first encounter of twelve standing Moai on a
platform with large heads, angular faces, prominent noses and hollow eye sockets was
at Ahu Akahana. It is believed that the most prominent Moai had their eyes filled during
special ceremonies with coral and red stones. According to tradition the first king of the
island, the legendary Hotu Matua, was buried here.
A ten-minute upward walk took us directly to the crater of the Rano Raraku. The
Polynesians believe this site is the heart of the ancient Rapa Nui civilization as
hundreds of iconic oak are scattered through the site. It is also believed most of the
Moai statutes were carved here before being transported to other parts of the island.
On the upper slopes of Rano Raraku at least seventy Moai were half-buried with their
heads sticking out.
Continuing our climb along this path was Ahu Tongariki, considered to be the largest
group of Moai (15 statutes) that had been erected on a platform. Legend has it as being
brought over by Hotu Matua, the foundling king of the Rapa Nui people from the
Marquesas Islands in French Polynesia. At the top of the climb was the Poike volcano,
the oldest on the island, in a crater covered with a small eucalyptus forest.
Abu Nui-Nui is located about 160 meters from the shore of Anakena Beach. According
to tradition, the high ranking chiefs of the powerful Miru Clan established their residence
and where the first king of the island landed and established the first settlement of the
Rapa Nui.
Ahu Te Pito Kura has the largest statute erected on Easter Island. It is almost 33 feet
high and weights approximately 70 tons The statute lies face down with a broken neck
and separated torso. To the left of the platform, encircled by a stone we all, there is a
spherical rock about three feet in diameter with four smaller res around it. If you pass a
compass over the stone the needle changes directions
The archaeological sight Vinapu is located on the edge of the south coast of Easter
Island. In the main Ahu there are six fallen statutes face down with three hat-like
structures placed on top of their heads called Pukao – carved from very light red
volcanic rock.
Puna Pu is considered a secret and sacred lace. The crater was used to manufacture
all the Pukao that were extracted and carved. A few rocks were visible on the southern
slope where a wall showed several pieces of reddish material.
The ceremonial village of Orango, located in the Southern part of Easter Island is one of
the most interesting and spectacular archeological sites. Here an ancient ritual still
impress the competitions of the Tapati Rapa Nui – a two week long Birdman competition.
This ritual is an annual competition to collect the first Sooty Tern (Seabird) off from the
inlet of Matu Nui, swim back to Rapa Nui and climb the sea cliff of Rano Kau to the
clifftop village of Orango.
The spectacular eruption of Rano Kau over two and a half million ago was the largest
volcanic crater on Rapa Nui. This amazing crater holds a beautiful freshwater lagoon.
Here you could see the small Totora Islands and the lush vegetation and microfauna in
the water.
Ahu Akivi is located on the southwest flank of the Maunga Terevaka volcano, the
highest point on Easter Island. Of the few Ahu built in the interior of the island Ahu Akivi
is the most important and elaborate platform of all of them. According to excavations
the construction of the Ahu began towards the end of the 15th century.
Tahai Is located a short distance from the town of Hanga Roa, the capital of Easter
Island, where most of the inhabitants live. Here you can find a large number of
restaurants, clothing stores, a supermarket and a pharmacy. The ceremonial complex of
Tahai combines archaeological remans with a beautiful landscape in front of the Pacific
Ocean. A mystical moment is to watch the sunset behind the Moai when the sunset
light illuminates the silhouettes of the statues on a background that changes color as
the sun is hidden on the horizons.