ETIQUETTE FOR AN APOCALYPSE – Anne Mendel

You are here: Home / Uncategorized / ETIQUETTE FOR AN APOCALYPSE – Anne Mendel 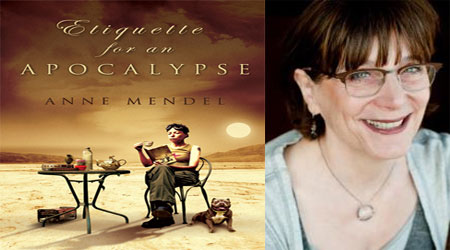 “Maybe this is just a bizarre dream, but I’ve been thinking I’m in a bad dream for three years and keep waking up to the end of the world.”
–Sophie Cohen, wife, mother, social worker, political organizer,
neighborhood drug dealer, espionage master, and narrator-heroine of Etiquette for an Apocalypse

Portland, 2023. After three years of living through earthquakes, volcanoes, plagues, looting, violence, starvation, and death, Sophie Cohen has almost made peace with her new normal. Three years after the Yellowstone Caldera smothered the world in ash, but strangely spared the Northwest U.S., Sophie has gotten used to inch-long hair (for lice prevention), termite soup for dinner (despite nightly dreams of chocolate éclairs), teenagers who actually read (if they want entertainment), and neighbors who are actually neighborly (in order to survive). What will rock Sophie’s world at the end of the world is discovering her own calling as a woman to be reckoned with—even though it takes being hit by a few earth-shattering surprises and hunted down by a power-crazed maniac.
In her gripping and funny (seriously) novel, ETIQUETTE FOR AN APOCALYPSE (May 2012; Brackets Press; $14.00; ISBN: 978-0-9848930-0-3), Anne Mendel draws readers into a world filled with dangers, disasters, and dysfunction. Told in Sophie’s voice, with a keen sense of dark humor, it is a thrilling story of survival. In spite of all the hardships and horrors, it is also a story of hope; even in a world without fossil fuels or iPhones or chocolate éclairs can be.

“A relative Garden of Eden, which just happens to be in Hell…” That’s how Sophie describes the eleventh-floor walkup she now calls home—a penthouse owned by her harebrained, judgmental mother, LuLu (who relishes famine as a diet aid and trains killer pit bulls she calls BooBoo and Cutie). At home, Sophie rarely sees her workaholic doctor husband, Bertrand, (but that’s an old normal) and rarely talks to her moody 13-year-old daughter, Sasha. When she’s not pinning for radishes and worms (an excellent protein source), Sophie works as drug dealer with her brainy, socially deficit brother, producing antibiotics and painkillers. Her life takes a sharp turn towards stranger and more dangerous territory after the fateful evening Bertrand whispers, “Women are getting their hearts cut out.”
Keeping the suspense and tension mounting, ETIQUETTE FOR AN APOCALYPSE follows Sophie and Bertrand as they set out to hunt down a serial killer targeting lovely young prostitutes. While undercover at a whorehouse called Camelot, the sleuthing partners get wind of a looming war between a local group of vigilantes and a powerful organized crime circle, known as the Knights of the Round Table. After getting badly beaten for snooping around, Bertrand sticks to what he does best—doctoring. As a solo act, Sophie audaciously steps into the role of becoming a spy-master to save her family, her community, and maybe even the known world. To her amazement, she finds strong allies in not only the condo’s resident and psychic, Athena Wonder, but also in two women she underestimated: her mother and her daughter. Beneath her shallow surface, LuLu is a font of wisdom—about powerful men and their machinations. And although she still seems like a vulnerable little girl, Sasha is fast emerging into a woman with a mind of her own—and the determination to stand up and fight for justice.
Soon, Sophie becomes an instrumental player in an increasingly complex and violent war over control of warehouses stocked with food and other staples thought non-existent (Nutella and toilet paper, among them) and a tiny, hidden treasure much more valuable than gold. Before reaching the final round of negotiations (which may only be the beginning), Sophie comes face to face with a sadistic, delusional lunatic who believes he is King Arthur, destined to rule what’s left of the world. How our heroine uses creative thinking and mothering skills, combined with ferocious courage, to outwit a monster will have readers gasping…and cheering.
In the end, Sophie gains a new respect and love for her mother, a new appreciation for her daughter, rekindled passion and deeper commitment in her marriage. Driven by intriguing and complicated characters, filled with practical tips for preparing for the ultimate worst-case scenario, and written with humor, grit, and heart, ETIQUETTE FOR AN APOCALYPSE makes the end of the world both much more real and less terrifying. To quote the MidWest Book Review, “This is really a great story, one that grabs you and keeps you until the end, or is it the end?”

“A page-turning thriller that is as thought-provoking as it is hilarious.”
–Marc Acito, Commentator, NPR’s All Things Considered

About the Author
ANNE MENDEL grew up in Arkansas and actually attended Miss Ashleigh’s Charm school. She learned nothing about dealing with disasters (unless breaking a high heel is a disaster).
Before she began writing full time, she was a community organizer. She lives in Portland, Oregon, with her husband. Mendel’s two sons are in college. Her muse is her dog, Humphrey.

Ann is a very funny woman. And funny is Good News! Paul