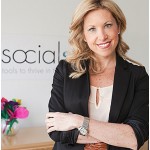 NYC based socialsklz:-) tools to thrive in the modern world (www.socialsklz.com) announces the launch of its fun, interactive after-school program called clubsocialsklz:-) offered in Manhattan (UWS and UES) and Park Slope, Brooklyn.

The 12 meetings (75 minutes each) take place on a weekly basis from September through December for a cost of $540.00.

clubsocialsklz:-) lessons are divided into three sections – ME, YOU, WE- and include topics such as proper greetings and introductions, social and communication skills in all realms of life, being a good friend, sportsmanship and teamwork, respect for oneself and others, personal grooming, body language, phone interaction, organization and timeliness, gratitude, dining skills, thoughtfulness and empathy, being safe and savvy on the Internet, and more. Classes feature engaging activities, role-play exercises, a mini-excursions in the neighborhood, and also provide a forum for students to discuss difficult social situations with their Club Leader and peers.

socialsklz:-) tools to thrive in the modern world  was developed to enhance the social and emotional learning (SEL) of children and young adults.  Founder, Faye Rogaski,

first developed the idea while teaching at NYU, where she noticed a general dearth of social skills amongst her students.  Ms. Rogaski said, “students would email me without properly addressing me or signing off, speak to me without making eye contact, and then friend me on Facebook where I’d often see their tawdry and salacious status updates on my newsfeed.” She developed a class titled The Brand Called You for her students and quickly realized that these lessons should start much earlier in life. Rogaski started volunteering a modified version of the program in NYC public and private schools as well as in organizations such as Big Brothers Big Sisters and the YMCA.  Once she saw the positive impact the program had on young students as well as their genuine desire to learn these skills, Rogaski decided it was time to turn her socialsklz:-) program into a business.

Rogaski and socialsklz:-) have appeared on numerous television programs such as the Today Show, ABC Eyewitness News, and TaxiTV as well as a wide variety of publications including Time Out NY Kids, The New York Times, New York Family, Crain’s New York Business, NY Resident, amNY, and Big Apple Parent.  She has a strong presence in the Mommy Blogging community, contributes to NYC Private Schools Blog and New York Family, and has been featured/reviewed on Mommy Poppins, DivaMoms, SingleMom, MomTrends, Mommy on a Shoestring, and StrollerMoms, just to name a few.