From The Green To The LIghthouse, Montauk Music Festival’s Main Venue Heads East

You are here: Home / Good News To Go / From The Green To The LIghthouse, Montauk Music Festival’s Main Venue Heads East 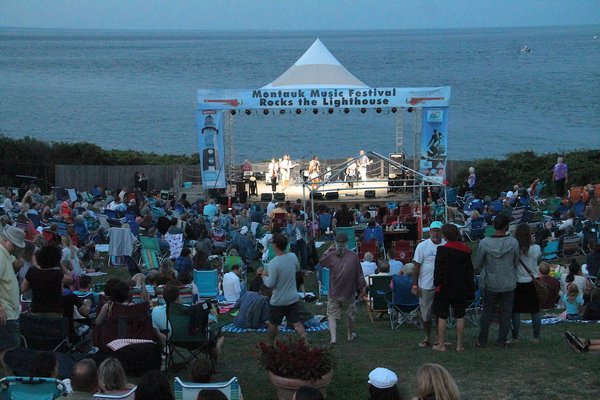 There’s going to be a new focal point at the 10th annual Montauk Music Festival, and you could say it will act as a veritable beacon drawing music lovers from miles around.

Ken Giustino, founder and producer of the festival, which runs from May 16 to 19, has announced that this year the primary public stage will be shifted from Montauk Green out to the Montauk Point Lighthouse Museum grounds where the 111-foot tall lighthouse will, indeed, serve as a beacon for music lovers in both the literal and figurative sense of the word.

“It’s the 10-year anniversary for the music festival and it’s much larger than what I used to do on the green in the middle of town,” explained Mr. Giustino in a recent discussion about this year’s event. “The venue is so amazing, I felt it was a good spot and asked the Montauk Historical Society if we could have it there.”

“They said sure,” he added. “They loved what I did last summer and said this will give them more exposure.”

Last summer, of course, was when a much talked about sold-out concert took place on the grounds of the lighthouse overlooking Block Island Sound. Called Montauk Music Festival Rocks The Lighthouse, the August concert was a community fundraiser for the lighthouse museum and the highlight of the evening was a somewhat surprise performance by perhaps Montauk’s best-known musical resident, Paul Simon.

“It was such a great experience and a beautiful venue and our weather happened to be perfect,” recalled Mr. Giustino, an organizer of the event. “We planned it on the full moon, there was not a cloud in the sky. In the middle of Paul’s session he pointed up, and said, ‘There’s the moon.’ it was just beautiful.”

Listening to live music in an idyllic outdoor space is the kind of magical experience that Mr. Giustino is looking to re-create at the point during this year’s music festival. The hill on the north side of the lighthouse forms a natural amphitheater as it slopes down to the stage perched on a bluff overlooking the ocean.

“Everybody was amazed by the spot last summer and said they never knew it was here,” he said. “Kind of like how New Yorkers never go to the Statue of Liberty.”

In addition to the primary stage, Mr. Giustino will add a second, mobile stage to the site which will be set up on the south side of the lighthouse.

“The south side hill is also set up as an amphitheater,” said Mr. Giustino. “People can watch two different acts on each hill, and the lay of the land will keep the music from one bleeding over to the other.”

“Both sides have a view of lighthouse,” he added.

Though the property has been the site of some festival acts in recent years, Mr. Giustino noted that it was a minimally used location. That all changes this year and with the stage recently rebuilt, it will now become a centerpiece of the music for the weekend. There are also logistical reasons for the relocation, chief among them the fact that the parking lot at Montauk Point can accommodate up to 850 cars, albeit with a fee.

“At least the lot is a nice secure place for the cars. You walk across the street and the venue is right there,” said Mr. Giustino who will also lease two buses for the weekend to shuttle people to and from the venue.

Though admission to the lighthouse grounds will, likewise, not be free for festival goers, he said that the money collected will benefit the Montauk Historical Society, the nonprofit organization that operates the lighthouse museum. Though the lighthouse museum will remain open during the festival, Mr. Giustino added that the exterior of the lighthouse is undergoing repairs this year and said the paint will be stripped from the structure, allowing concertgoers to see how it looked when it was first constructed back in 1796.

“When people come to the music festival, it will be like a historical moment,” he said. “The lighthouse will stay that way for a year while they patch cracks.”

Also being put to good use during the festival will be the small building behind the lighthouse which houses the Montauk Lighthouse Oceans Institute.

“We’ll be using that for workshops,” explained Mr. Giustino. “In the past we did workshops on Friday on the Green but during the concerts, we couldn’t do them. This building is secure and soundproof, and we’ll have free workshops on Saturday and Sunday.”

Workshops will include a vocal coaching session, a demonstration by a flamenco guitarist and business sessions for musicians offered by lawyers, booking agents and promoters who will offer insight into where the music industry is headed and how performers can further their careers.

“We’re still putting together the schedule,” said Mr. Giustino. “Every hour will be a different workshop.”

Though the action may be shifting east, fans of Montauk Green need not despair with this change of venue. Mr. Giustino notes there will be plenty of music to go around and though the bigger acts will now be at the lighthouse, the green will still offer its fair share of music.

“We’ll still do the satellite concerts around town at restaurants and bars. We’ll have 465 shows in four days by about 100 acts. Right now, we’re up to about 50 acts,” said Mr. Giustino, noting that a third of the acts are East End bands while the remainder come from the tri-state area, across the country and around the world.

But the star this year will, without a doubt, be Montauk Point Lighthouse.

“It’s just such a great venue, everybody is excited about it,” he said.

The opening party for the Montauk Music Festival is Thursday, May 16 at 7 p.m. at Westlake Fish House. The music will run daily through Sunday, May 19, at venues all around Montauk. Visit montaukmusicfestival.com in coming weeks for the complete schedule.

> “No, it’s disparate treatment of people based on religion that makes Israel an apartheid country….” MORE