You are here: Home / All We Need Is Love / Children and Parents / GEORGES MALAIKA FOUNDATION & NOËLLA COURSARIS MUSUNKA: 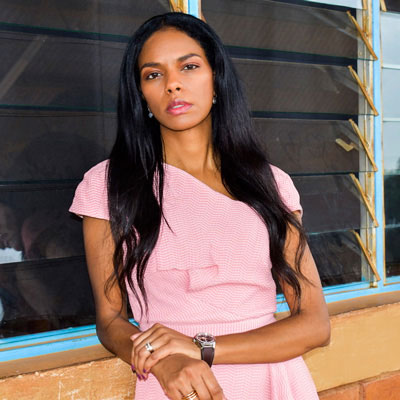 ‘THE RISE OF CONGO: EMPOWERING THROUGH EDUCATION’ FUNDRAISER

The event will be hosted by comedian Eddie Kadi and will feature an exclusive performance by the legendary Lokua Kanza. Music by DJ Hardy Indiigo, photography by Richard Foulser, art by Congolese painters, jewelry and fashion by talented African designers.

Guest speakers will include former prosecutor of the International Criminal Court Luis Moreno-Ocampo; humanitarian and daughter of Muhammad Ali, Khaliah Ali, who placed the first stone of the GMF school in the Congo; Kara Gerson, Executive Director of the Voss Foundation which partnered with GMF to create two fresh-water wells; Joe Whinney, CEO of Theo Chocolate, who has just collaborated with Ben Affleck to produce a fair trade organic chocolate bar using Congolese cocoa; Dr. Amy Lehman, Founder of the Lake Tanganyika Floating Health Clinic in Congo; and fitness expert Holly Rillinger from Flywheel, who will talk about her recent trip to the GMF school to create a sports program.

About the Georges Malaika Foundation

The Georges Malaika Foundation (GMF) is a non-profit organization dedicated to unlocking the potential of African girls and their communities in the Democratic Republic of Congo (DRC) through education.

Named in memory of Noëlla Coursaris Musunka’s father, Georges, and the Swahili word malaika, for ‘angel,’ GMF empowers through education. GMF is dedicated to the advancement of African communities by providing educational opportunities to young girls. In 2011 GMF finished construction on their first Girls’ School in the DRC. 152 girls are enrolled and receive a fully comprehensive program including free tuition, school supplies, uniforms, and two healthy meals a day. In 2012 GMF built two fresh water wells as part of a collaborative effort with the Voss Foundation, and is now providing clean drinking water to the entire community. GMF’s latest project is a partnership with FIFA to build a community center that will function as a base for sports, health, education and enterprise.

Noëlla Coursaris Musunka was born in Lubumbashi, DRC. Noëlla was educated in Belgium and Switzerland, and after achieving a degree in business management, she moved to London and broke into the world of international modeling. Noëlla’s success brought her to New York where she started the Georges Malaika Foundation in 2007, in tandem with her active modeling career.

Noëlla has been featured in a 30-minute special on CNN’s African Voices and CNN’s Connect the World. Hoping to bring international attention to the education dilemma in Africa, she has addressed UNICEF and the Congolese Parliament about issues confronting underprivileged girls. She was also a panelist in the Global Creative Leadership Summit in 2009 and was a featured speaker at the United Nations’ Investing in Women and Entrepreneurship Solutions to address the Millennium Development Goal 3 on International Women’s Day 2011. Noella also participated in the Clinton Global Initiative Annual Meeting in 2012, where she addressed President Clinton during the Opening Plenary.

• Margot Bingham – star of the hit series “In Between Men”