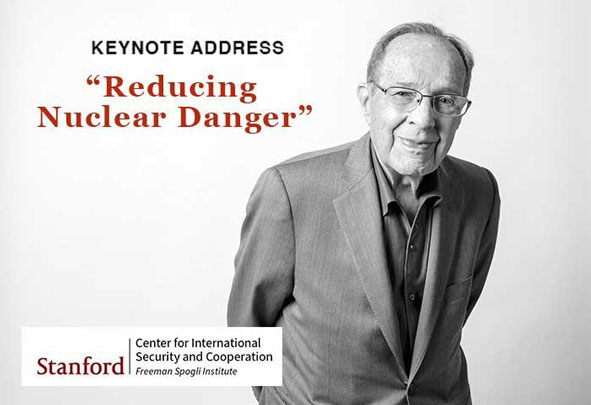 Dr. William J. Perry to be Honored With the Cranston Peace Prize at Stanford Event
SHARE THIS EVENT | LinkedIn | Facebook | Twitter
MAY 17, 4:00 — 5:30pm PDT
Please join us next week via Zoom when the Global Security Institute (GSI) has the honor to present former Secretary of Defense of the United States, Dr. William J. Perry, with the Alan Cranston Peace Award at Stanford University in an event co-sponsored by GSI and the Center for International Security and Cooperation (CISAC).

Many scholars and policy-makers have stated that the war in Ukraine, the spread of nuclear weapons to new states, and the lack of arms control agreements outside of the New Start treaty make the world extremely dangerous. Indeed, the Doomsday Clock of the Bulletin of the Atomic Scientists currently stands at 100 seconds to midnight, the closest to doomsday since the clock was invented in 1947. Is this estimate true, and, if so, what can the leaders and people of the world do to reduce the risks?

Reverend Paul Sladkus to join the Monday May16th, 11am est celebrating the International Day of Living Together in Peace!
Next Post: Interfaith Prayer Vigil for Buffalo Mass Shooting Victims…