Good News interviews Richard Traum, Ph.D., President and Founder of Achilles International at 90th and 5th Ave, before their weekly get together. Join them on a Saturday and you will never forget the experience! Click Here for Video & Podcast…

You are here: Home / All We Need Is Love / Disability / Good News interviews Richard Traum, Ph.D., President and Founder of Achilles International at 90th and 5th Ave, before their weekly get together. Join them on a Saturday and you will never forget the experience! Click Here for Video & Podcast… 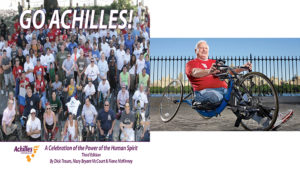 Dick, an above the knee amputee began running in the mid-1970s. A business entrepreneur, with a successful computer applications company, Dick realized he needed to do something about his sedentary lifestyle. He joined the West Side YMCA and found his passion in running. From a mile, he progressed to a 5-mile race in Central Park.

Buoyed by his success, five months later, he ran his first marathon, and became the first amputee to run 26.2 miles. There was no looking back. In 1983, he founded the Achilles Track Club, currently known as Achilles International.

Dick has a BS, MBA, and Ph. D. from New York University and lives in Manhattan. He’s been married for 40+ years and has a married son and a granddaughter.

Dick Traum, an above-the-knee amputee, completes the New York City Marathon, the first amputee to do so

An article about Dick Traum appears in Runner’s World. The story inspires Terry Fox, a young Canadian amputee suffering from cancer, to embark on a cross country run across Canada to raise funds and awareness for cancer research. Terry ultimately lost his battle to the disease in 1981 but his legacy lives on in a series of Terry Fox races.

The Vermont Chapter is founded, the first chapter outside New York

Achilles Kids is founded, kicked off with the “Race Around New York” virtual marathon

The inaugural Achilles Marathon in Brooklyn

Achilles launches the Hope & Possibility 5 mile run, a race that gives awards for achievement in multiple disabled categories and includes both able-bodied and disabled runners. The event’s name is taken from Achilles founding Board Chair, Trisha Meili’s book, “I Am the Central Park Jogger – A Story of Hope and Possibility”

The first Hope & Possibility race outside NY takes place, in Minneapolis, MN 2006 – Founding of ‘Skills for Positive Change’, a program for people living with diabetes.

Achilles celebrates participation in 25 years of the NYC Marathon.

Prince Harry of Wales, Cindy and Megan McCain, and Heather Mills join over 5000 participants in the 8th Annual Achilles Hope & Possibility. It was also the 1st year the H&P was an ING NYC Marathon Qualifying Race.

And more and more Good News!

Team InTandem helping those challenged have fun on a InTandem Bike, in Central Park, NY. Join them on Saturdays, change your life! With LOVE, Click Here for Videos & Podcasts…
Next Post: Thought for the Day…