For All information is at https://www.broadwayworld.com/article/Medicine-Show-Theatre-Ensemble-presents-THE-LAST-JEW-OF-BOYLE-HEIGHTS-20171121 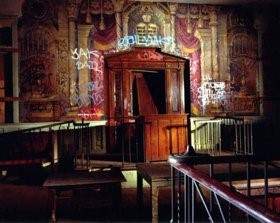 A toy factory on the industrial edge of the Boyle Heights neighborhood of Los Angeles. Two survivors (a Holocaust survivor and a young Mexican illegal immigrant) meet in a world filled with fears of deportation, low wages, poor working conditions, and a struggle for the vanishing American dream.
Steve Greenstein is an actor and playwright. His recent stage acting credits include Guys and Dolls at The Old Globe theater in San Diego and Asolo Rep. in Florida (Big Jule). Over the River and Through the Woods at St. Vincent’s summer theater (Frank). The acclaimed 50th anniversary Production of West Side Story in London’s West End (Officer Krupke). National Tour of Flashdance The Musical (Harry). Regional credits include The Buddy Holly Story (High Pockets) and Big River (Pap Finn).
He has written two acclaimed solo plays, “From Bubby To Bat Yam” and “Voices from the Holy and Not so Holy land,” which have been performed in theaters in The United States, Belgium, Israel and England, “Such as The Pargod,” and Beersheva National Theater in Israel. San Diego Rep. And the Faakelteater in Antwerp.
On film and television, Mr Greenstein has enjoyed working on such classic TV shows as Seinfeld, Growing Pains, Law and Order SVU and many others. Recently he was seen on Unbreakable Kimmy Schmidt, the Detour, and Iron Fist. Film credits include Confessions of a Shopaholic, Future Folk, The Bear, and others.
Off Broadway credits No place to be Somebody, (Capeletti) Another Man’s Poison (Mel) and other Wonderful Productions.
He has worked as an educator in various youth at risk theater programs in Los Angeles and New Jersey. He has been an educator with The Newark Public Schools since 2001.
Working with so many acclaimed actors and directors during his career, Mr. Greenstein feels excited to be directing this first stage production of The Last Jew of Boyle Heights. He is grateful to the Actors Temple and the creative friends he has met there, who are helping to bring this production to life, including Aron Bederson, and Barbara Bova and Rabbi Jill Hausman.
Aron Bederson (Producer) is a long-time member of Medicine Show Theatre Ensemble and the Cantorial soloist/assistant at The Actors Temple in Manhattan. He is a performer, educator and playwright most recently presenting a reading of the play he is developing on the relationship of Thorton Wilder and Gertrude Stein. He is happy to be supporting the message of this play.
The cast features: Morris Mark Alpern*/Chandler Gregoire/Marta Rymer/Celeste Lanuza*/Brandon Schrami*/MaureenFenninger*/Uriel Menson*/Steve Greenstein*/Judy Wong*SM *Appears Courtesy of AEA. Set Designer-James Dardenne.
The Last Jew of Boyle Heights, written by Steve Greenstein, produced by Aron Bederson, will be performed at Medicine Show Theatre Ensemble, 549 West 52 St. 3rd Floor (BTW 10th and 11th Aves.). Previews Dec 2, 3. Performances Dec 7,8,9/14,15,16, running Thurs-Sat- at 8:00 P.M. – Sundays at 2 P.M.