Grand Master Kim is honored with the 5 Star Diamond Award. Click Here for Videos and Podcasts

You are here: Home / Living & Learning / Health and Wellness / Grand Master Kim is honored with the 5 Star Diamond Award. Click Here for Videos and Podcasts 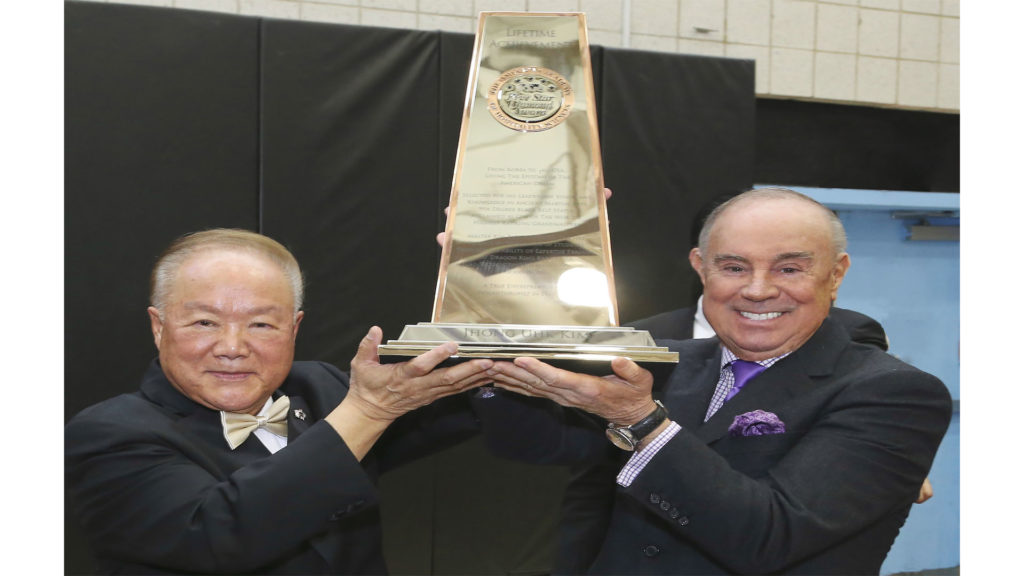 Master Kim’s formula of success is based on hard work, prioritizing his objectives, and promoting his businesses through skilled public relations. His three areas of focus are The Martial Arts, Real Estate Development and Restaurant Management.  http://grandmasterceo.com/bio/

Born in Korea, Master Kim migrated to the United States in 1975 seeking the “American Dream.” He brought with him a knowledge of business and the ancient martial arts to this modern “land of opportunity.” He adapted quickly to the American culture and honed his intellect by obtaining a Bachelors and Masters degree in science and became associate professor at Long Island University, John Jay College, Kingsboro Community College, and The College of Staten Island.

As a 9th Degree Black Belt Master Kim is one of the world’s highest-ranking Grandmasters. Sanctioned by the International and U.S. Olympic Committees, Dragon Kim’s Karate USA chain consists of seven schools in New York, New Jersey, Connecticut and Pennsylvania. His martial art style was combat tested by the Green Berets. He trained in Vietnam and his discipline’s character building qualities have been proven by the thousands of students that he has taught self discipline, self respect and faithful citizenship. His three oldest sons John, Robert, and David are all masters of the art and carry on the ancient family traditions.

Supporter for Charity and Receiver and Civic Awards

Master Kim is proud of  his success and the success of all of his seven children. He takes satisfaction from the fact that they are all hard working citizens of the land that Master Kim has grown to love more and more each day. His daily involvement with his IHOP restaurant gives him the opportunity to teach his work ethic to one generation of employees after another. For personal enjoyment he has learned to play the piano, has won ball room dancing competitions, is an avid table tennis player, has acted in a movie and has even done some modeling. He has particularly loved decorating his home that has won numerous architectural awards. He has become known as an effective motivational speaker. Master Kim not only lives the American dream—he encourages others to pursue it.

The American Academy of Hospitality Sciences (AAHS) is an establishment of reviewers specializing in the reviewing of hotels, resorts, spas, airlines, cruise lines, automobiles, products, restaurants and chefs. It is most notably known for its reviews on the hotels, resorts, and travel industries. The Academy started of as a restaurant rating bureau, founded in 1949. The current establishment is an offspring of this early group of reviewers and was officially founded in 1989. The Academy is most known for its International Star Diamond Award.

The Academy is based in New York City and is directed by Joseph Cinque. The members of the Board are experienced in both travel and the stated industries. The Academy also includes a large board of honorary trustees that serve as regional directors, general managers, restaurateurs, chefs, and other functions.

The most known aspect of the American Academy of Hospitality Sciences is the International Star Diamond Award. The award is the most prestigious award of true excellence in hospitality, gastronomy, attitude, quality, cleanliness, and above all service. The Academy receives a large number of possible recipients for the award from respectable sources around the world. The selection is then refined by the Board of Trustees. The final evaluation is a visit by an anonymous inspector to review the destination and its services.

The award itself has multiple formats:

– For hotels and resorts, a set of gold-plated plaques including the logo and engraved signatures of the three board members;

– For restaurants, a set of plaques, both gold and silver-plated, with the logo and signatures;

– For chefs, a plaque with recognition engravings and a medal;

– A framed letter from the Academy recognizing the destination’s winning of the award;

– Lapel pins and cuff links in a jewelry box.

An additional format of a plate has been used for chefs.