You are here: Home / All We Need Is Love / Religion and Spirituality / Judaism / Happy Easter & Happy Passover from Good News!! 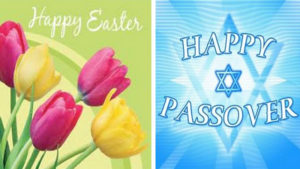 Passover or Pesach (/ˈpɛsɑːx, ˈpeɪsɑːx/; from Hebrew פֶּסַח‬ Pesah, Pesakh), is a major, biblically derived Jewish holiday. Jews celebrate Passover as a commemoration of their liberation by God from slavery in ancient Egypt and their freedom as a nation under the leadership of Moses. It commemorates the story of the Exodus as described in the Hebrew Bible, especially in the Book of Exodus, in which the Israelites were freed from slavery in Egypt. According to standard biblical chronology, this event would have taken place at about 1300 BCE (AM 2450).

Passover is a spring festival which during the existence of the Temple in Jerusalem was connected to the offering of the “first-fruits of the barley”, barley being the first grain to ripen and to be harvested in the Land of Israel.

Passover commences on the 15th of the Hebrew month of Nisan and lasts for either seven days (in Israel and for Reform Jews and other progressive Jews around the world who adhere to the Biblical commandment) or eight days for Orthodox, Hasidic, and most Conservative Jews (in the diaspora). In Judaism, a day commences at dusk and lasts until the following dusk, thus the first day of Passover begins after dusk of the 14th of Nisan and ends at dusk of the 15th day of the month of Nisan. The rituals unique to the Passover celebrations commence with the Passover Seder when the 15th of Nisan has begun. In the Northern Hemisphere Passover takes place in spring as the Torah prescribes it: “in the month of [the] spring” (בחדש האביב Exodus 23:15). It is one of the most widely celebrated Jewish holidays.

When the Pharaoh freed the Israelites, it is said that they left in such a hurry that they could not wait for bread dough to rise (leaven). In commemoration, for the duration of Passover no leavened bread is eaten, for which reason Passover was called the feast of unleavened bread in the Torah or Old Testament. Thus matzo (flat unleavened bread) is eaten during Passover and it is a tradition of the holiday.

Historically, together with Shavuot (“Pentecost”) and Sukkot (“Tabernacles”), Passover is one of the Three Pilgrimage Festivals (Shalosh Regalim) during which the entire population of the kingdom of Judah made a pilgrimage to the Temple in Jerusalem. Samaritans still make this pilgrimage to Mount Gerizim, but only men participate in public worship.

Easter
Resurrection
Icon of the Resurrection, with Christ having kicked down the gates of Hades and pulling Adam and Eve out of the tombs. Christ is flanked by saints, and Satan—depicted as an old man—is bound and chained. (See Resurrection of Jesus in Christian art.)

Easter, also called Pascha (Greek, Latin) or Resurrection Sunday, is a festival and holiday celebrating the resurrection of Jesus from the dead, described in the New Testament as having occurred on the third day of his burial after his crucifixion by the Romans at Calvary c. 30 AD. It is the culmination of the Passion of Jesus, preceded by Lent (or Great Lent), a forty-day period of fasting, prayer, and penance.

Most Christians refer to the week before Easter as “Holy Week”—it contains the days of the Easter Triduum, including Maundy Thursday, commemorating the Maundy and Last Supper, as well as Good Friday, commemorating the crucifixion and death of Jesus. In Western Christianity, Eastertide, or the Easter Season, begins on Easter Sunday and lasts seven weeks, ending with the coming of the fiftieth day, Pentecost Sunday. In Eastern Christianity, the season of Pascha begins on Pascha and ends with the coming of the fortieth day, the Feast of the Ascension.

Easter and the holidays that are related to it are moveable feasts which do not fall on a fixed date in the Gregorian or Julian calendars which follow only the cycle of the sun; rather, its date is determined on a lunisolar calendar similar to the Hebrew calendar. The First Council of Nicaea (325) established two rules, independence of the Jewish calendar and worldwide uniformity, which were the only rules for Easter explicitly laid down by the council. No details for the computation were specified; these were worked out in practice, a process that took centuries and generated a number of controversies. It has come to be the first Sunday after the ecclesiastical full moon that occurs on or soonest after 21 March, but calculations vary.

Easter is linked to the Jewish Passover by much of its symbolism, as well as by its position in the calendar. In most European languages the feast called Easter in English is termed by the words for passover in those languages and in the older English versions of the Bible the term Easter was the term used to translate passover. Easter customs vary across the Christian world, and include sunrise services, exclaiming the Paschal greeting, clipping the church, and decorating Easter eggs (symbols of the empty tomb). The Easter lily, a symbol of the resurrection, traditionally decorates the chancel area of churches on this day and for the rest of Eastertide. Additional customs that have become associated with Easter and are observed by both Christians and some non-Christians include egg hunting, the Easter Bunny, and Easter parades. There are also various traditional Easter foods that vary regionally.

President Trump shares messages for Passover and Easter with the world.
Next Post: Thought for the Day…