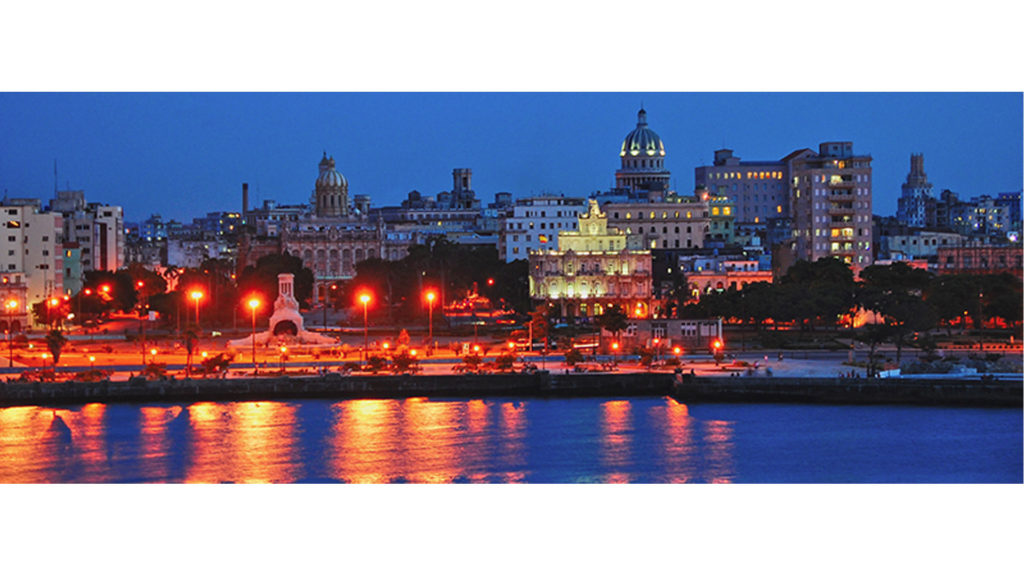 A People-to-People Cultural Experience By Terri Hirsch, Havana is the capital and largest city of Cuba, located just 90 miles from Key West, Florida. The only cars that Cuban citizens can own legally are cars created and bought before 1959. Dance is very important in Cuba, the birthplace of classic dance styles like the Bolero, Mambo and Cha Cha. In Havana you can find monuments, forts, churches, palaces and fortresses, alleys and tunnels. My first impression upon arriving in the Havana Harbor was the historic Plaza de San Francisco de Asis, created in the 16th century when Spanish galleons stopped by at the harbor on their passage to the Indies through Spain.

Imagine driving down the Malecon, the avenue that runs along the seawall on the northern shore of Old Havana, in a vintage Ford, Buick, Chevrolet, Cadillac, Mercury, Dodge, Oldsmobile or Pontiac. Transferring from the pier to Revolution Square we picked up a convertible Chevrolet with a driver and travelled through Old Havana, a UNISCO World Heritage Site. Old Havana is the downtown city center and is the core of the original city of Havana. We learned about the city’s colonial history, it’s ongoing restoration and Cuban street life while making stops at some of the most iconic sites like the former seat of the Cuban Congress and the Capital, which is housed in the Cuban Academy of Science and Technology since 1959. We viewed the main squares, including Plaza Viega, the San Francisco de Paula (previously a church and now the concert hall), the Cathedral of San Cristobal and the historic site of the Civil Square, renamed the Revolution Square in 1969.

A stop was also made at the Castillo del Morro built by the Spanish in 1589 and completed in 1640 to protect the city from buccaneers and pirates. The walls were well preserved and cannons were all around the fortress. Named after the Biblical Magi it is a picturesque fortress guarding the entrance to Havana Bay and could be seen for miles as it dominates the Port entrance. Here we discovered the military architecture of Havana from the 16th to 19th century.

Not many people think about visiting a cemetery but this was a Must Stop. The Cemetery of Cristobal Colon, founded in 1878, was named after Christopher Columbus. It contains over 500 major mausoleums, chapels and family vaults in all white tombstones with styles from Renaissance to Art Deco. It is the original burial cite of Ibraham Ferrer Planas, one of the most famous Cuban musicians from the original Buena Vista Social Club and Jose Miguel Gomez, the second president of the Cuban Republic (after the 2nd U.S. military intervention) and was known as “the shark.”

Another Must See is one of the finest cigar stores in Cuba, the Casa del Habano, located in the Melia Cohiba Hotel. Cuba is known for having some of the best rum and cigars in the world.

This store is stunning and luxurious with large glass-lined cabinets flanking the front wall of the room and big leather sofas in the center near the curved bar. There’s an outdoor seating area, a quiet smoking room in the back, a huge walk-in humidor and walls lined with all varieties of cigars and accessories, plus an attentive, friendly staff helping you find what you want.

There were many evening bars and cabarets with live music. In Old Havana, the historic Sloppy Joe’s Bar which reopened in 2013 after being closed for 48 years. This bar was frequented by many famous figures i.e., Novelist Ernest Hemingway, Actor Errol Flynn and English Novelist Graham Greene. In the Habana Cafe at the Melia Cohiba Hotel you will find the Buena Vista Social Club where you can enjoy a night of traditional music. Our choice was the Legendary Tropicana Cabaret, considered one of the most beautiful Cabarets in Cuba with a production of over 200 dancers and singers performing under the stars. At the entrance of the Tropicana we were adorned with large majestic trees, known as royal palms, mango trees and cedar. It had a look and feel of an enchanted magical forest. The show and surroundings gave us an amazing full-filled night. Among the many stars who had performed here were Nat King Cole and Josephine Baker.

The following day we visited American author Ernest Hemingway’s house in Finca Viria, located in the small town of San Francisco de Paula where he wrote two of his most notable novels: “For Whom the Bells Toll” and “The Old Man and the Sea.” Today it is a National Historic Landmark and Museum. We could not enter the house but would look inside these beautifully kept rooms through doorways and windows. A short 15-minute walk took us to the Ambos Mundos Hotel where Ernest Hemingway in Room 511 did some of his best works writing short story classics and non-fiction books. On the outside of Room 511 is a plaque dedicated to Hemingway, while inside the room is a collection of Hemingway photos, books and memories. In a corner of the ground floor hotel two walls with framed photographs are dedicated to this celebrated author.

As our ship sailed out of the Havana Harbor I thought about the incredible history, culture and architecture and the friendliness of the people that Cuba had to offer.

Thought for the day
Next Post: Thought of the Day