Ibn ‘Arabi and Rumi: Teachings for the Modern World

You are here: Home / Living & Learning / Education / Ibn ‘Arabi and Rumi: Teachings for the Modern World 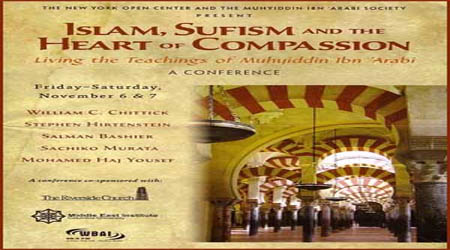 New York, New York — July 12, 2011 — A conference and an evening concert presented at Columbia University. It will include international scholars, from the U.S., Europe and the Middle East, who have devoted their careers to translating and interpreting the works of Muhyiddin Ibn ‘Arabi (1165–1240) and Jalaluddin Rumi (1207–1273). Evening performances will include renowned musicians such as Omar Faruk Tekbilek, Salman Ahmad, and Sufi poet, Coleman Barks. Participants who attend are from both the U.S. and the international community.

This is the second, in a biennial series of conferences on Ibn ‘Arabi started in 2009. The 2011 conference will focus on the teachings of both Ibn ‘Arabi and Rumi, offering an in-depth view of Middle Eastern philosophy and spiritual thought rarely heard about in the West today.

Ibn ‘Arabi and Rumi are the two great pillars of Islamic mysticism, known as Sufism. They appeared in the same century, one from the Muslim West, the other from the East, both bringing a new vision of human potential and realization meant to inspire us and teach us to understand ourselves more deeply and expand our view of the world.

The program will include lectures, workshops, a panel discussion, and poetry readings in the original languages of Arabic and Persian and their English translation. Here are a few of the presentations being given: Moses, Ibn ‘Arabi, and the Voice of Fire; Ibn ‘Arabi: Mysticism, Lyric, and the Persian-Arabic Love Affair; and On the Seriousness of Rigorous Hilarity in the Masnavi: The Sense of Humor in Rumi’s Teachings.

A separate event, this evening concert celebrates Sufism through the poetry and commentary of Coleman Barks, accompanied by Grammy Award winner and cellist, David Darling, the music of lead singer, Salman Ahmad of the Sufi rock group, Junoon and the dances of whirling dervish, Sakina.

The New York Open Center (www.opencenter.org) is a nonprofit organization of holistic learning and world culture, founded in 1984. It is the largest urban holistic center in the U.S., presenting accomplished speakers such as Karen Armstrong, Thich Nhat Hanh, Cornel West, Julia Cameron and numerous others.

The Muhyiddin Ibn ‘Arabi  Society (www.ibnarabisociety.org) is a nonprofit organization founded in 1977, headquartered in Oxford, England, with an American branch in Berkeley, CA. It is the leading organization promoting the remarkable spiritual legacy and teachings of Ibn ‘Arabi.