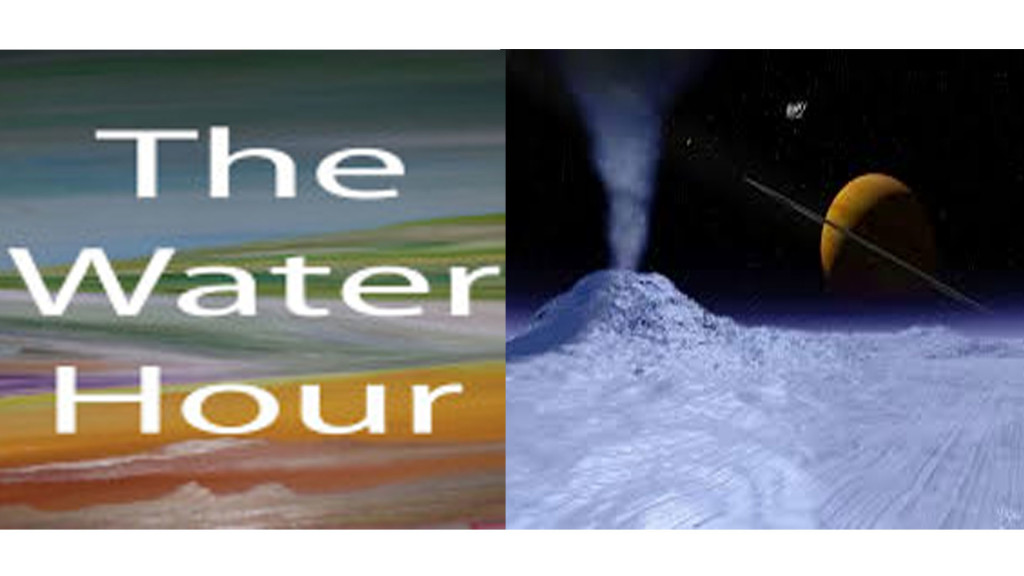 The Water Hour Special Report thanks to Wikipedia.

Pluto (minor-planet designation: 134340 Pluto) is a dwarf planet in the Kuiper belt, a ring of bodies beyond Neptune. It was the first Kuiper belt object to be discovered. It is the largest and second-most-massive known dwarf planet in the Solar System and the ninth-largest and tenth-most-massive known object directly orbiting theSun. It is the largest known trans-Neptunian object by volume but is less massive than Eris, a dwarf planet in thescattered disc. Like other Kuiper belt objects, Pluto is primarily made of ice and rock[14] and is relatively small—about one-sixth the mass of the Moon and one-third its volume. It has a moderately eccentric and inclined orbit during which it ranges from 30 to 49 astronomical units (4.4–7.3 billion km) from the Sun. This means that Pluto periodically comes closer to the Sun than Neptune, but a stable orbital resonance with Neptune prevents them from colliding. In 2014, Pluto was 32.6 AU from the Sun. Light from the Sun takes about 5.5 hours to reach Pluto at its average distance (39.4 AU).[15]

Pluto was discovered in 1930 by Clyde Tombaugh, and was originally considered the ninth planet from the Sun. After 1992, its status as a planet fell into question following the discovery of several objects of similar size in the Kuiper belt. In 2005, Eris, which is 27% more massive than Pluto, was discovered, which led the International Astronomical Union (IAU) to define the term “planet” formally for the first time the following year.[16] This definition excluded Pluto and reclassified it as a member of the new “dwarf planet” category (and specifically as a plutoid).[17] Some astronomers believe Pluto should still be considered a planet.[18][19][20]

Pluto has five known moons: Charon (the largest, with a diameter just over half that of Pluto), Styx, Nix,Kerberos, and Hydra.[21] Pluto and Charon are sometimes considered a binary system because the barycenterof their orbits does not lie within either body.[22] The IAU has not formalized a definition for binary dwarf planets, and Charon is officially classified as a moon of Pluto.[23]

On 14 July 2015, the New Horizons spacecraft became the first spacecraft to fly by Pluto.[24][25] During its brief flyby, New Horizons made detailed measurements and observations of Pluto and its moons.[26]

In the 1840s, Urbain Le Verrier used Newtonian mechanics to predict the position of the then-undiscovered planet Neptune after analysing perturbations in the orbit of Uranus.[27] Subsequent observations of Neptune in the late 19th century led astronomers to speculate that Uranus’s orbit was being disturbed by another planet besides Neptune.

In 1906, Percival Lowell—a wealthy Bostonian who had founded the Lowell Observatory in Flagstaff, Arizona, in 1894—started an extensive project in search of a possible ninth planet, which he termed “Planet X“.[28] By 1909, Lowell and William H. Pickering had suggested several possible celestial coordinates for such a planet.[29] Lowell and his observatory conducted his search until his death in 1916, but to no avail. Unknown to Lowell, his surveys had captured two faint images of Pluto on 19 March and 7 April 1915, but they were not recognized for what they were.[29][30] There are fourteen other known prediscovery observations, with the oldest made by the Yerkes Observatory on 20 August 1909.[31]

Because of a ten-year legal battle with Constance Lowell, Percival’s widow, who attempted to wrest the observatory’s million-dollar portion of his legacy for herself, the search for Planet X did not resume until 1929,[32] when its director, Vesto Melvin Slipher, summarily handed the job of locating Planet X to Clyde Tombaugh, a 23-year-old Kansan who had just arrived at the Lowell Observatory after Slipher had been impressed by a sample of his astronomical drawings.[32]

Tombaugh’s task was to systematically image the night sky in pairs of photographs, then examine each pair and determine whether any objects had shifted position. Using a blink comparator, he rapidly shifted back and forth between views of each of the plates to create the illusion of movement of any objects that had changed position or appearance between photographs. On 18 February 1930, after nearly a year of searching, Tombaugh discovered a possible moving object on photographic plates taken on 23 and 29 January of that year. A lesser-quality photograph taken on 21 January helped confirm the movement.[33] After the observatory obtained further confirmatory photographs, news of the discovery was telegraphed to the Harvard College Observatory on 13 March 1930.[29]

The discovery made headlines across the globe. The Lowell Observatory, which had the right to name the new object, received over 1,000 suggestions from all over the world, ranging from Atlas to Zymal.[34] Tombaugh urged Slipher to suggest a name for the new object quickly before someone else did.[34] Constance Lowell proposed Zeus, then Percival and finally Constance. These suggestions were disregarded.[35]

The name Pluto, after the god of the underworld, was proposed by Venetia Burney (1918–2009), a then eleven-year-old schoolgirl in Oxford, England, who was interested in classical mythology.[36] She suggested it in a conversation with her grandfather Falconer Madan, a former librarian at the University of Oxford‘sBodleian Library, who passed the name to astronomy professor Herbert Hall Turner, who cabled it to colleagues in the United States.[36]

The object was officially named on 24 March 1930.[37][38] Each member of the Lowell Observatory was allowed to vote on a short-list of three: Minerva (which was already the name for an asteroid), Cronus (which had lost reputation through being proposed by the unpopular astronomer Thomas Jefferson Jackson See), and Pluto. Pluto received every vote.[39] The name was announced on 1 May 1930.[36] Upon the announcement, Madan gave Venetia £5 (equivalent to £300, or $450 USD in 2015),[40] as a reward.[36]

The choice of name was partly inspired by the fact that the first two letters of Pluto are the initials of Percival Lowell. Pluto’s astronomical symbol (, UnicodeU+2647, ♇) was then created as a monogram constructed from the letters ‘PL’.[41] Pluto’s astrological symbol resembles that of Neptune (), but has a circle in place of the middle prong of the trident ().

The name was soon embraced by wider culture. In 1930, Walt Disney was apparently inspired by it when he introduced for Mickey Mouse a canine companion named Pluto, although Disney animator Ben Sharpsteen could not confirm why the name was given.[42] In 1941, Glenn T. Seaborg named the newly createdelement plutonium after Pluto, in keeping with the tradition of naming elements after newly discovered planets, following uranium, which was named after Uranus, and neptunium, which was named after Neptune.[43]

Most languages use the name “Pluto” in various transliterations.[h] In Japanese, Houei Nojiri suggested the translation Meiōsei (冥王星?, “Star of the King (God) of the Underworld”), and this was borrowed into Chinese, Korean, and Vietnamese.[44][45][46] Some Indian languages use the name Pluto, but others, such as Hindi, use the name of Yama, the Guardian of Hell in Hindu and Buddhist mythology, as does Vietnamese.[45] Polynesian languages also tend to use the indigenous god of the underworld, as in Maori Whiro.[45]

Once found, Pluto’s faintness and lack of a resolvable disc cast doubt on the idea that it was Lowell’s Planet X.[28] Estimates of Pluto’s mass were revised downward throughout the 20th century.[47]

Astronomers initially calculated its mass based on its presumed effect on Neptune and Uranus. In 1931, Pluto was calculated to be roughly the mass of Earth, with further calculations in 1948 bringing the mass down to roughly that of Mars.[49][51] In 1976, Dale Cruikshank, Carl Pilcher and David Morrison of the University of Hawaii calculated Pluto’s albedo for the first time, finding that it matched that for methane ice; this meant Pluto had to be exceptionally luminous for its size and therefore could not be more than 1 percent the mass of Earth.[52] (Pluto’s albedo is 1.3–2.0 times greater than that of Earth.[3])

In 1978, the discovery of Pluto’s moon Charon allowed the measurement of Pluto’s mass for the first time: roughly 0.2% that of Earth, and far too small to account for the discrepancies in the orbit of Uranus. Subsequent searches for an alternative Planet X, notably by Robert Sutton Harrington,[55] failed. In 1992, Myles Standish used data from Voyager 2‘s flyby of Neptune in 1989, which had revised the estimates of Neptune’s mass downward by 0.5%—an amount comparable to the mass of Mars—to recalculate its gravitational effect on Uranus. With the new figures added in, the discrepancies, and with them the need for a Planet X, vanished.[56] Today, the majority of scientists agree that Planet X, as Lowell defined it, does not exist.[57] Lowell had made a prediction of Planet X’s orbit and position in 1915 that was fairly close to Pluto’s actual orbit and its position at that time; Ernest W. Brown concluded soon after Pluto’s discovery that this was a coincidence,[58] a view still held today.[56]

From 1992 onward, many bodies were discovered orbiting in the same area as Pluto, showing that Pluto is part of a population of objects called the Kuiper belt. This made its official status as a planet controversial, with many questioning whether Pluto should be considered together with or separately from its surrounding population. Museum and planetarium directors occasionally created controversy by omitting Pluto from planetary models of the Solar System. The Hayden Planetarium reopened—in February 2000, after renovation—with a model of only eight planets, which made headlines almost a year later.[59]

As objects increasingly closer in size to Pluto were discovered in the region, it was argued that Pluto should be reclassified as one of the Kuiper belt objects, just as Ceres, Pallas, Juno and Vesta eventually lost their planet status after the discovery of many other asteroids. On 29 July 2005, the discovery of a new trans-Neptunian object, Eris, was announced, which was thought to be substantially larger than Pluto. This was the largest object discovered in the Solar System since Triton in 1846. Its discoverers and the press initially called it thetenth planet, although there was no official consensus at the time on whether to call it a planet.[60] Others in the astronomical community considered the discovery the strongest argument for reclassifying Pluto as a minor planet.[61]